There's a new mountain to ski at Schweitzer 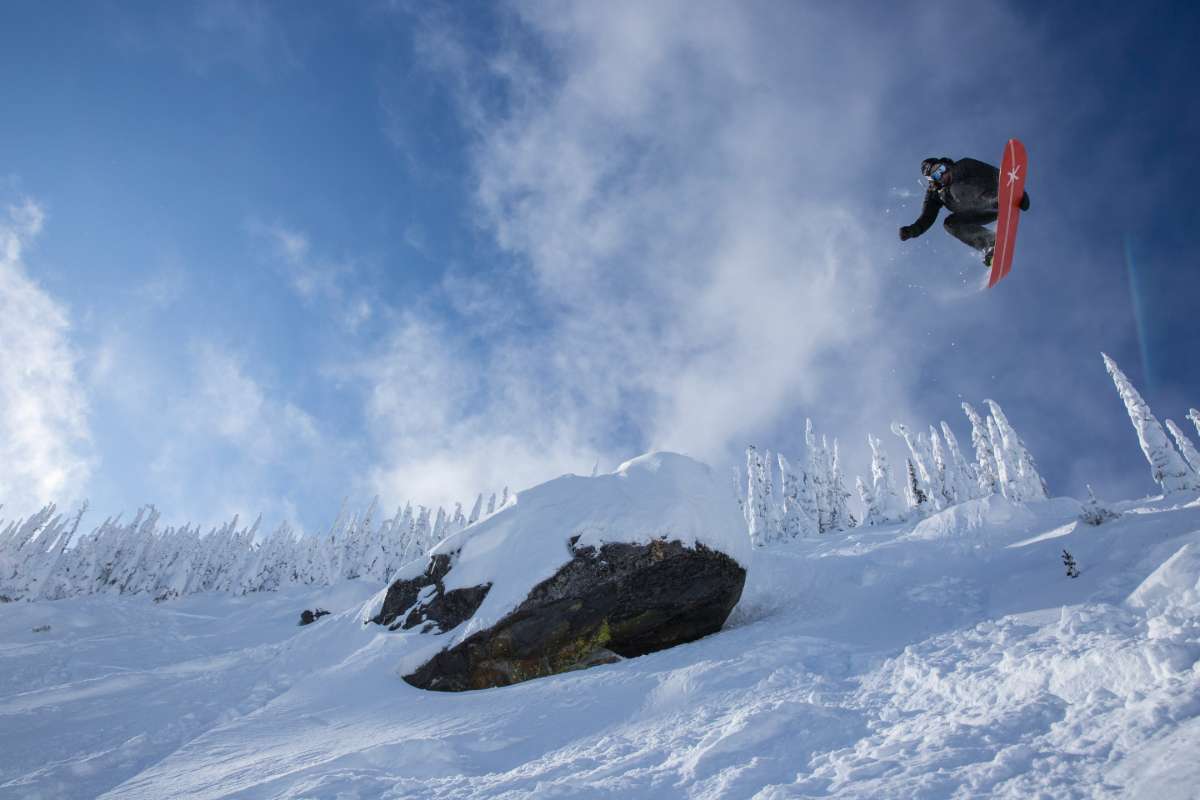 At the end of the summer of 2019, Schweitzer Resort mountain manager Rob Batchelder and I rode the Great Escape Quad to the top of the mountain for a peek into the Outback Bowl and a check on progress of the construction of the Cedar Express Quad and the Colburn Triple. The sneak preview of the goings on in the Outback was interesting and exciting, but without the presence of the white stuff skiers and boarders dream of, it was all abstract.

A ski season later—albeit a shorter one than we would have liked, courtesy of Covid—it seems that a whole new ski area has been discovered and revealed in the environs of Colburn Lake. A first view from the top of Whiplash last December evoked two words, the first being “Holy” and the second not being “cow.” Since this is a family magazine, we will use the euphemism “snow” to replace the word that is not “cow.”

I am not the only person who has exclaimed that. In fact, Schweitzer marketing maven Dig Chrismer, who has worked—and skied—on the mountain for a decade confessed, “This place is my playground, my backyard, where it doesn’t matter the day, the conditions, or the season, I know where I am. Imagine my surprise this past December when I dropped off Kaniksu and got utterly and completely lost.” She also noted, that after getting reoriented, she was soon skiing through a newly created glade, giggling with joy.

Just when you think you know a mountain, it changes on you. And boy—or girl—is it fun!

What’s in a word?

Back in the day when there was still a huge rock right in the middle of Upper Kaniksu, two friends whiling away the ride on Chair Six decided that the word “fun” had no direct synonym. Others come close—amusement, pleasure, joy—but none really mean “fun,” in the truest sense. It was also decided that they were having some.

That rock is long gone—did Patrol used their leftover dynamite to remove it once upon a spring?— as is Chair Six, but the fun factor in the Outback Bowl at Schweitzer Mountain Resort has increased dramatically. If you haven’t tried it, you may be skeptical, because the Outback has been fun for all the decades there have been lifts to ride back there. Last winter, however, due to some genius chair placement, extensive glading and brushing, and fanciful run creation, the factor went way up.

In fact, when Schweitzer staffer Randi Lui was asked her opinion of the new experience(s) available in the Outback, she used the word seven times in three minutes, and seven times fun is really fun.

“At first,” she said, “I wasn’t very excited, because I was very fond of Chair Six—it was my Zen place for leg recovery and peace and quiet—but after riding the new lifts and skiing the new terrain—which is really old terrain that they fixed up—it’s actually a lot of fun. You can get a lot more runs in over a lot more interesting landscape.”

Some needed more convincing than others. Chrismer said that initially there were a few negative responses from Schweitzer regulars including “trampled snow” and the loss of the chance to rest that Chair Six afforded. “But, when I reached out to them at the end of the season,” she said, “they had become very happy with the work we did.”

It is still possible to get a modicum of rest on the Colburn Triple, even though it doesn’t stop near as often as Six used to—like, hardly ever. Those who lament the loss of Six because it gave them a chance to recover from the effects of the Lakeside Chutes can take comfort that the ride on the Triple is just a few minutes shorter than the ride was on Six. And, if you want to really rest, you can glide over to the Sky House without having to push hard.

The Triple has 160 chairs that seat three, while Chair Six had 146 chairs that seated two. The ride on the triple is several minutes shorter than the ride was on Six. More people get to the top sooner and lift line time is greatly reduced. Sandpoint teacher John Hastings had his happy face on when he said, “I never had to wait in line, even on busy weekend days.” On weekdays? Ski on! Or board. Whatever. No lines. No waiting.

“Yeah, but what about all those other skiers stealing my lines?” the powder hounds howl. Don’t growl. There are a lot more lines to steal.

While construction crews were busily pouring concrete and putting up towers, as well as disappearing Six—done so completely that even Schweitzer vets like Chrismer wonder where it used to be—loggers and accompanying brushing crews were doing the really important work of making new places to ski. Some secret stashes were lost, but new steeps and glades were opened up for more—for lack of a better word—fun.

In the process of reborning the Outback, a heroic amount of glading was done to keep tree skiers busy and happy. Along with this, five designated runs were created—four groomable—that peel off of Lower Kaniksu. In order of appearance, Casper, Triple Bypass, Slapshot, and Roller Ghoster are four black diamonds that drop to skier’s right. Roller Ghoster, the ungroomed one, is actually the Chair Six lift line—sans towers—beginning where Six exited the trees at skier’s right of Lower Kaniksu. The new blue run, Know Fun, is a left turn just below the Have Fun exit.

There’s that word again. Groomers are great, but it’s the new glades that are—for some—the most fun.

It’s all new, and all good

“I’ve been skiing Schweitzer since we moved here in the mid ’80s,” Don Helander said, “and I appreciated the Outback and riding the long Snow Ghost chair. I’m always open to change, though, and back there, it’s all good.” 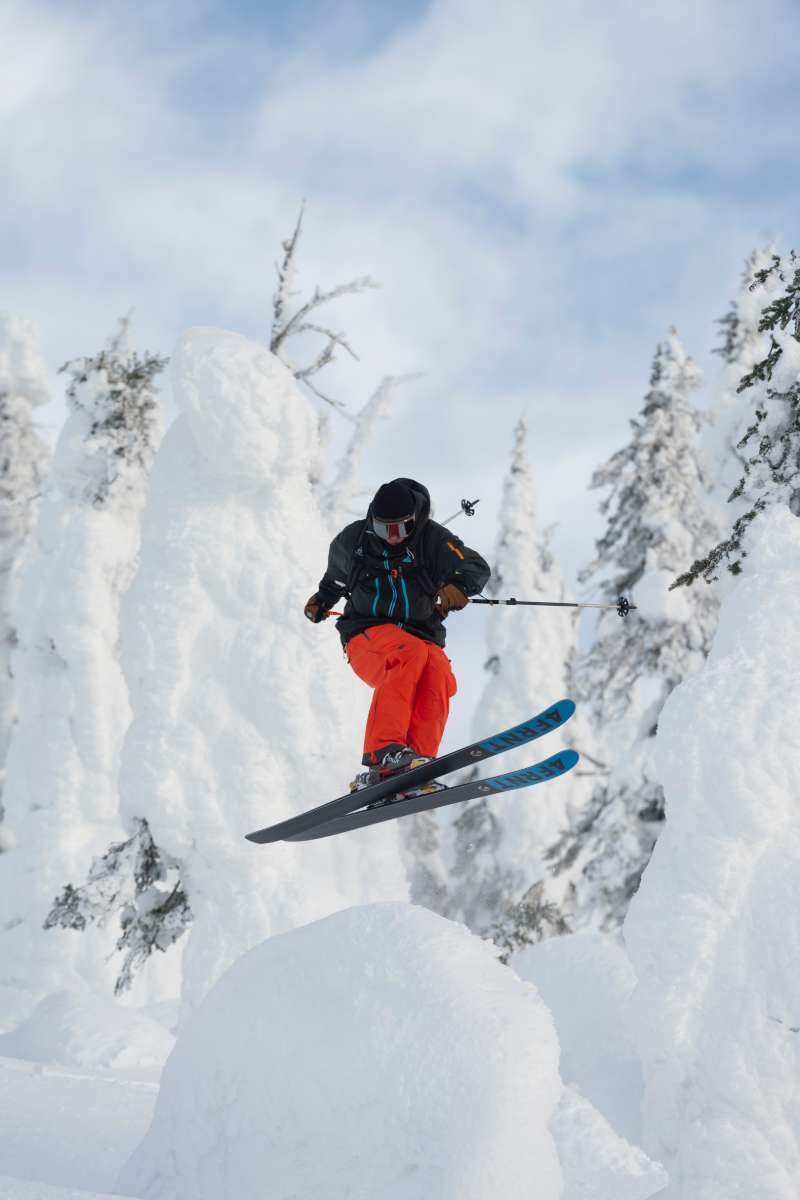 Skier on new runs at Schweitzer | Photo by Woods Wheatcroft

Between the new designated runs accessed by the Cedar Express Quad, what once were almost unskiable thickets are now wide glades. This “fixed-up” terrain sports some of the steepest—surprise!—and thereby most fun topography on the mountain. Chunks of double, black-quality drops revealed by the logging and brushing pepper the slopes skier’s right of Kaniksu. Between Blue Grass and Casper, for instance, where Tower 19 used to point tree skiers toward a bit of heaven, lies a newly revealed two turn thrill you might want to survey closely before dropping off the edge. Where once Hastings and a skier probably not to be named later fought their way through an alder patch into the blessed relief of the Chair Six lift line, the 100 percent morass of brush and trees we … uh, I mean “they” … escaped is now open to ride.

For the last few years, Helander—who can make a game out of anything—and friends have been enjoying what he calls “transversing.” The concept allows snow riders to get the maximum amount of powder in between designated runs. It goes like this: drop in, make a few turns, choose a direction, and traverse to a new line, then take some even number of turns, traverse to the next line, and repeat. Proceed as far as possible in the direction of your original traverse without dropping into a groomer (traversing across a groomer is allowed). Do it again. The Schweitzer Mountain Resort record for transversing pre-Colburn Triple began just to the right of the top of Upper Kaniksu and ended with four turns down skier’s right side of Whiplash to the runout on the south side of Colburn Lake.

This is still possible from the top of the Triple, with the added bonus of being able to load back on said lift just a few turns down Vagabond. But transversers have also found a new place to play.

“Cedar Park at Schweitzer—the new quad—it’s ready-made for that,” said Helander. “You unload right at the top of Lower Kaniksu, and then skier’s left and right—left particularly—you have looong traverses and you get to experience all these different fun powder lines, but not all on the same vertical line.

You get a lot of great lines in between traverses, and the run can last forever—or almost. The Cedar Park terrain lends itself to that overall.”

Yeah. What he said.

Then there’s the lift ride itself

Riding the Colburn Triple tends to reinforce the idea that you are in a whole new ski area. From the load to about a third of the way up, riders are treated to an almost unobstructed view of the Lakeside Chutes and all the slopes between Whiplash and Debbie Sue. It dawdles along to the north of Colburn Lake, even running downhill a bit before taking a sudden turn uphill. “Holy snow,” indeed. Just below Mid-Rock, a Triple rider finds themselves looking what seems straight up. The aspect is jaw dropping, and you might find yourself wondering, “Just where in the ski world am I?” 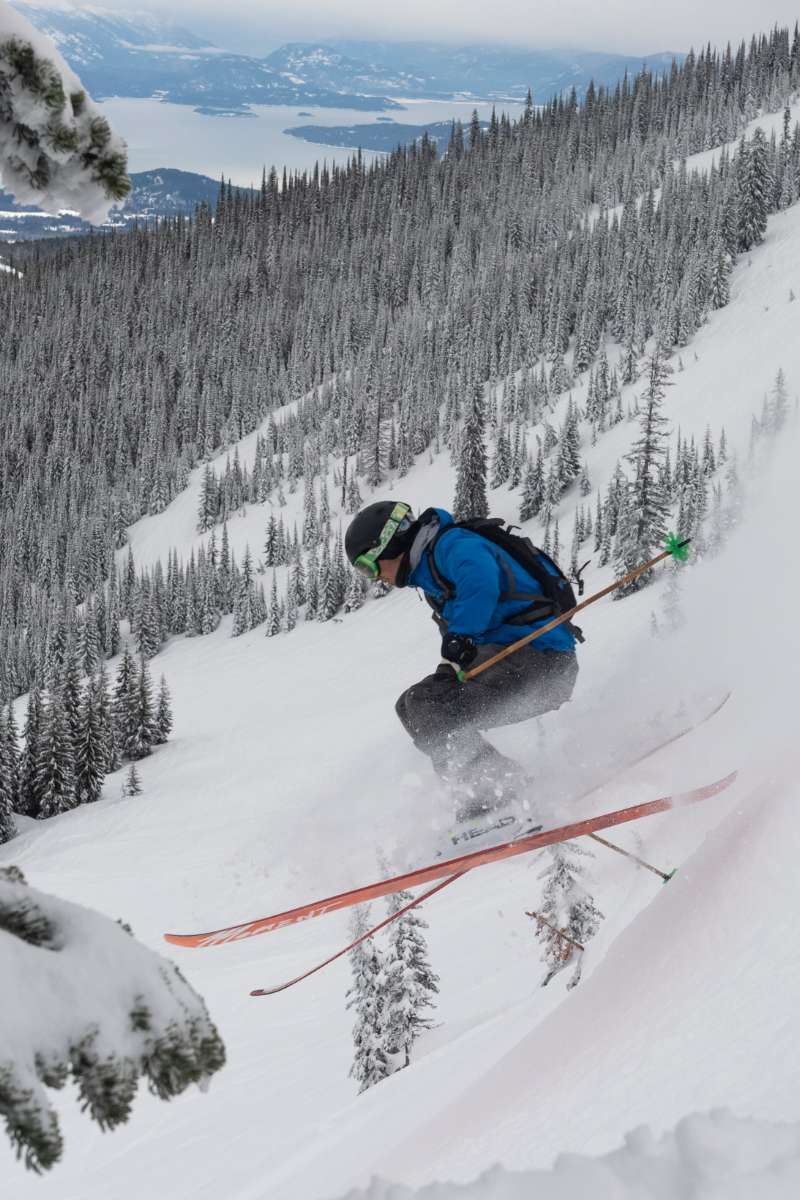 Skier on new runs at Schweitzer | Photo by Woods Wheatcroft

That question may continue into the 2021 season. Chrismer gave out that they have created more glades between Stella and Phineas’ Forest. Plans are to continue thinning brush between Whiplash and Debbie Sue. And—bonus!— brushing crews worked the lower half of Kathy’s Yard Sale.

Holy snow! A freshly debrushed Kathy’s Yard Sale? Sounds like fun to me.