Whew. That was a lot of work … for, like two decades! In this special commemorative issue, 20 Years, we take the occasion of Sandpoint Magazine’s 20th anniversary to look back at all the things that have passed through our pages – and what some of our local leaders think the next 20 might hold for our town.

And maybe most fascinating: Where Are They Now? catches up with the 40 accomplished individuals featured over the years in the Sandpoint Magazine interview, just to see what they’re up to now.

It just makes sense – some would say, horse sense – that one of the biggest pastimes and lifestyles around here would make into our pages one day. In Horse Heaven: Sandpoint’s Equine Culture, we take a gallop into our town’s big equestrian scene.

And, in our feature Hiking Tales Mom Shouldn’t Read, a collection of wilderness wayfarers tell their stories of dumbness and derring-do in our mountains. 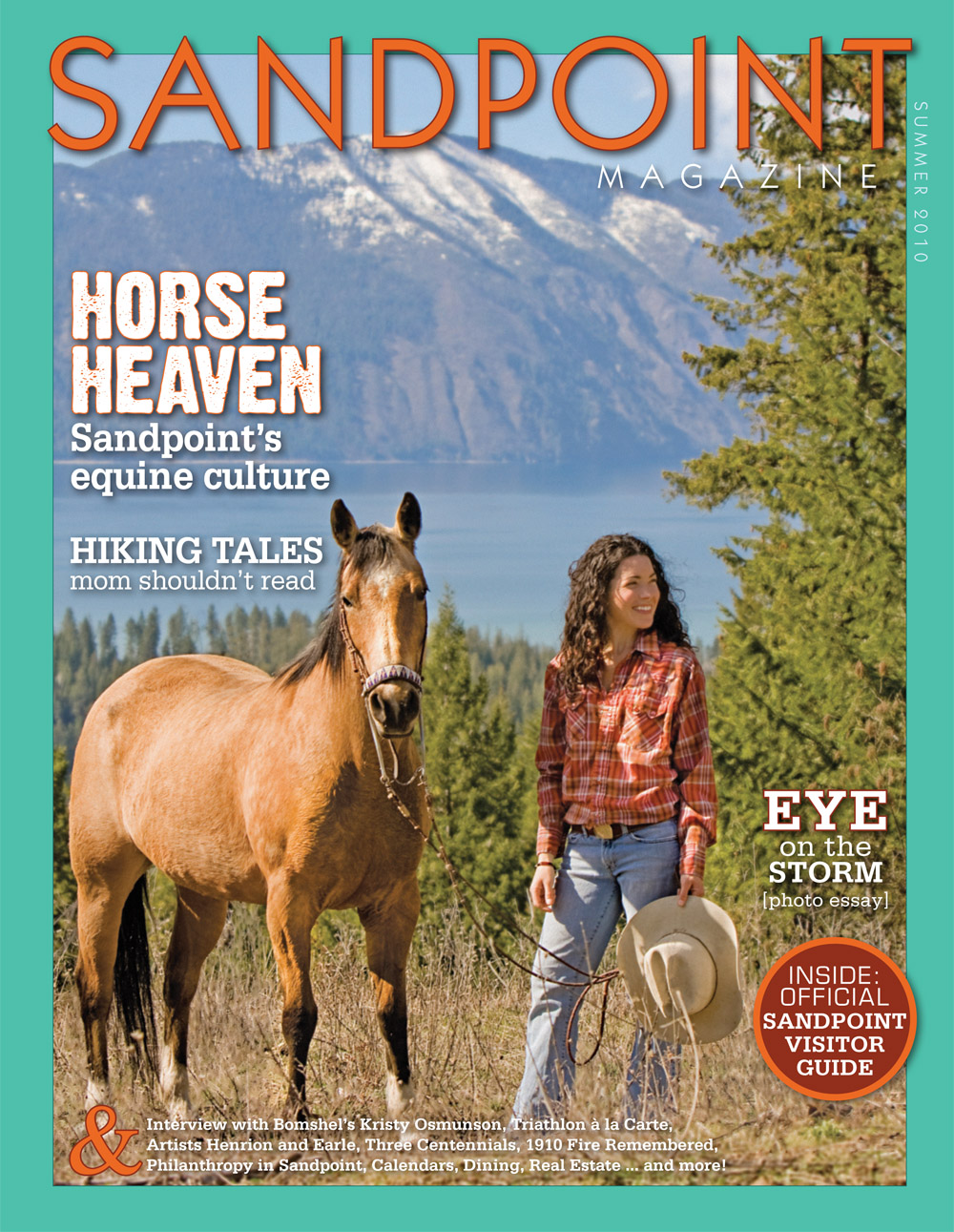 Every rider remembers their  First Season at Schweitzer , and these three Schweitzerites lived to tell of it.• Bonner General Hospital • Lake Whitefish in Pend Oreille • Fleeting Moments at West Fork Cabin • Immigrants in Sandpoint • Interview: classical guitarist Leon Atkinson • Plus, Sandpoint-Africa connections, Winter Tracks photo essay, and real estate features on Sandpoint as a retirement mecca, a haven for self-sufficient types and home to new commercial spaces, and much more.

Come to Sandpoint on a summer day and you will notice “people on bikes”  get the Fat Tires and Life on Two Wheels low down • David Thompson Bicentennial • Sandpoint Transition Initiative • Hiking the Selkirks with an Artist • Change in Sandpoint: Education • Plus, interview with Intermountain Community Bancorp CEO Curt Hecker, road names that bear lasting legacies, a fuel-free adventure with five friends, an ode to the Sand Creek rope swing and much more. 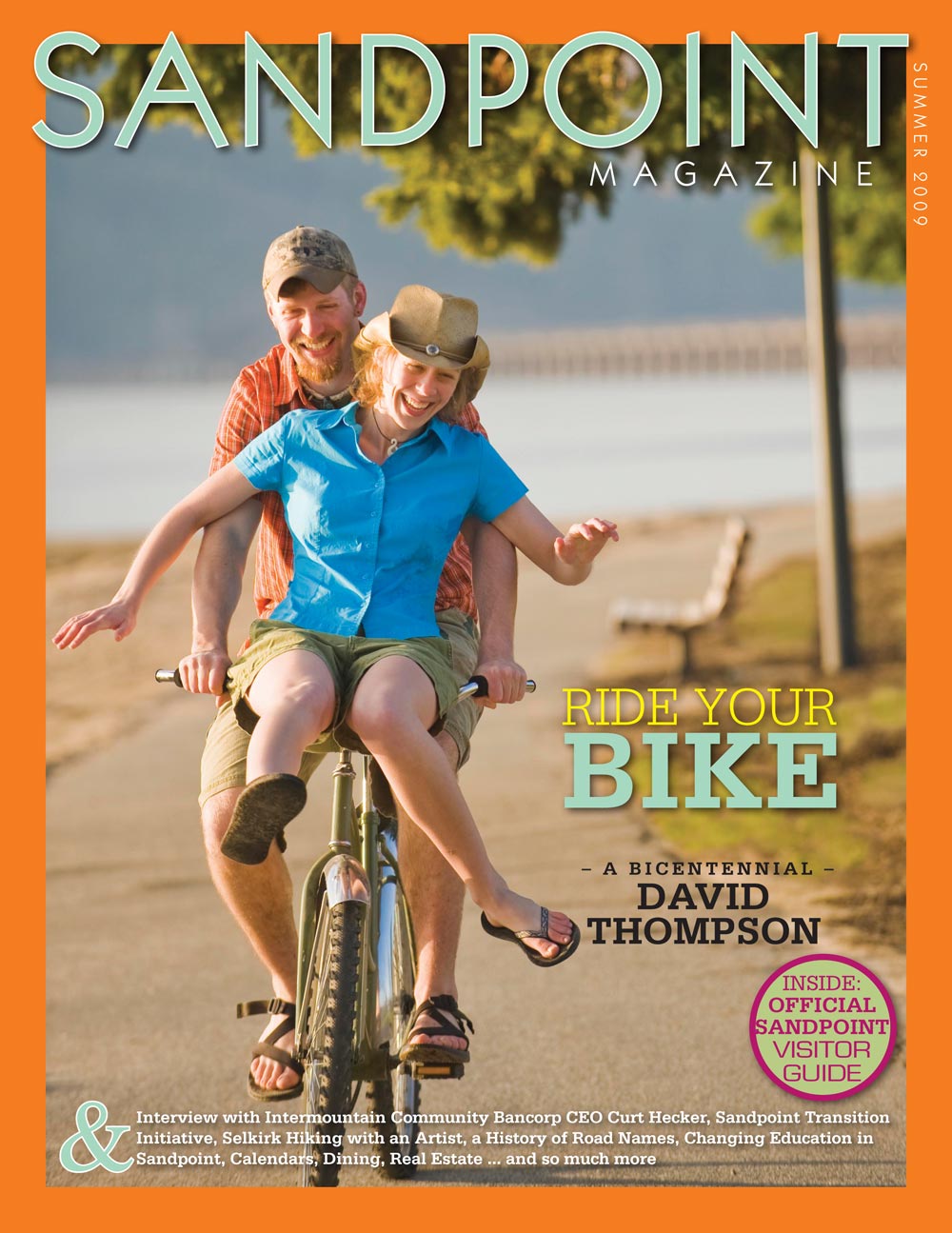 On the Cover this issue is a fabulous Doug Marshall photo from the Photo essay “Joy of Winter” but inside stories include: Schweitzer: Launchpad for Snow Pros • Backcountry with Selkirk Powder Company • Sandpoint-born Sarah Palin • Interview: Paul Schaller, Quest Aircraft CEO • First Ski Descent in the Monarchs • North Idaho Winter Wildlife • Sandpoint Community Theater Comeback • Escape from the Dust Bowl • Plus,  daily painters, singing in the choir, then-and-now for SHS Valedictorians, the boom in thrift stores and much more. 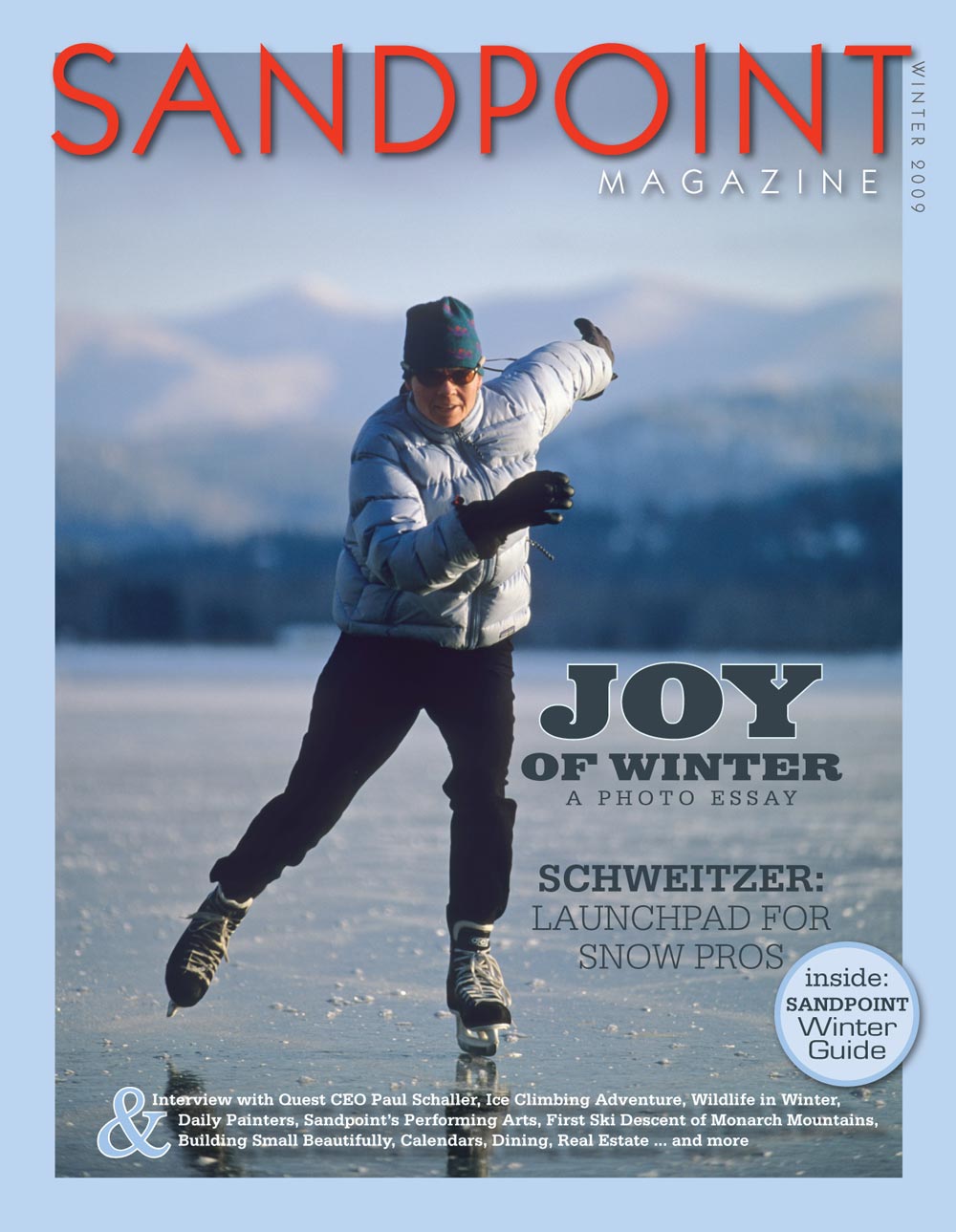 Natural attractions, open all-year around, cost of admission is free and the views are stunning. The most popular hikes in North Idaho will have few visitors and a high “wow” factor, read  Five Easy Sandpoint-Area Hikes in this issue. 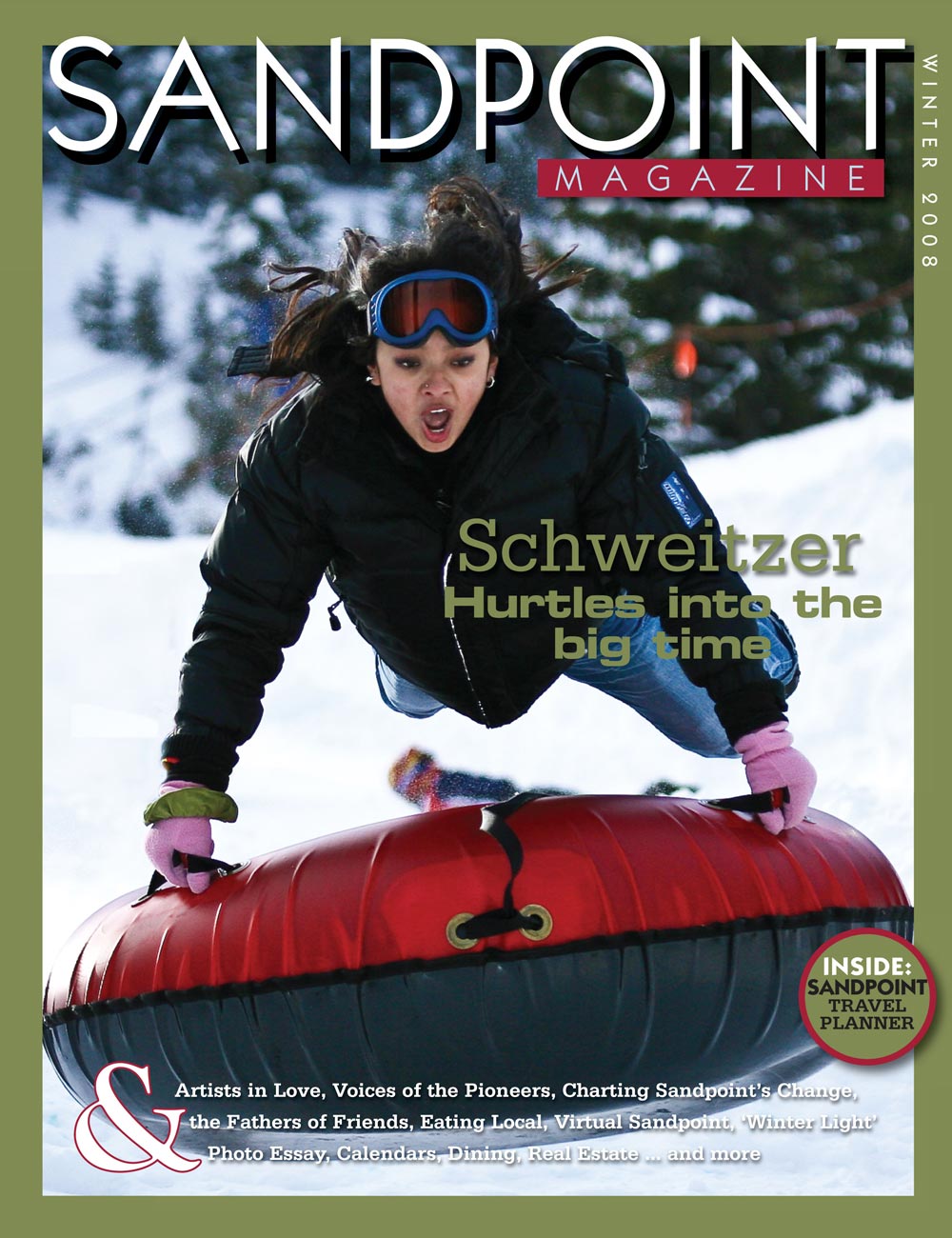 Favorites of Sandpoint in Summer get featured this issue with everything you need to know about the The Festival at Sandpoint, The Long Bridge Swim and local lore of the Ponderettes and Pie.

25 Years of the Festival at Sandpoint – It’s a musical milestone, 25 years of music under the stars with the Festival at Sandpoint, along with stories about sold-out shows, poster artists, a festival-goer’s guide and the season calendar. Ever wonder who we are… we do all the time, maybe its time to check the pulse in Sandpoint again. Then we follow our fat tire friends as they pedal around the lake in 4 days, 5 friends on 2 fat tires around the big lake 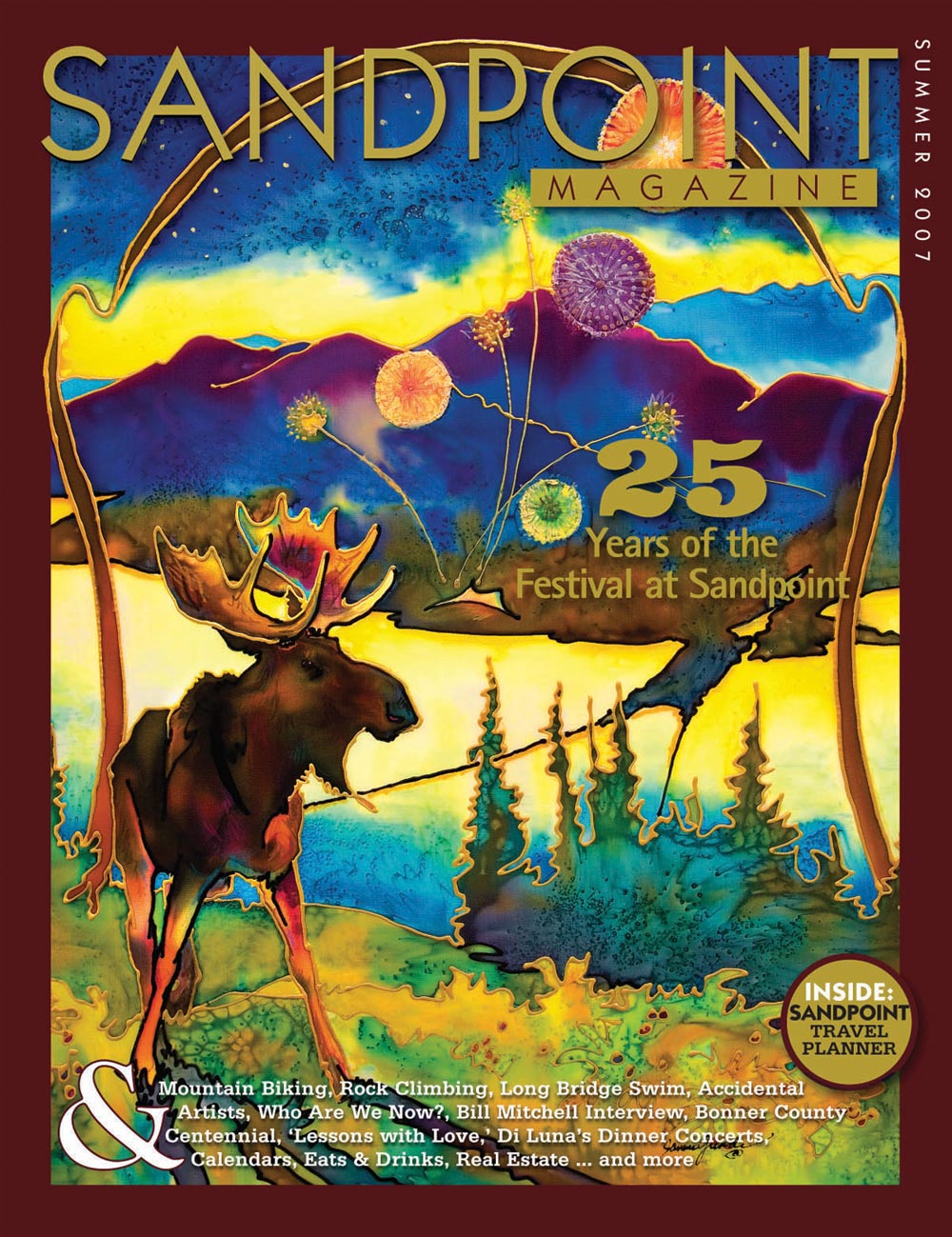 Sandpoint Magazine as the keeper of the stories, marks yet another milestone in the history of Sandpoint,  this time it is the big centennial milestone of Bonner County

Tales from the Edge – Read about mayhem and magic on Schweitzer Ski Patrol in its 40-plus year history, along with an introduction to the new Schweitzer CEO Tom Chasse. Plus: snowcatting in the Selkirk Mountains; Sandpoint’s first film festival; acoustic musicians on the rise; two backcountry ski adventures, and more 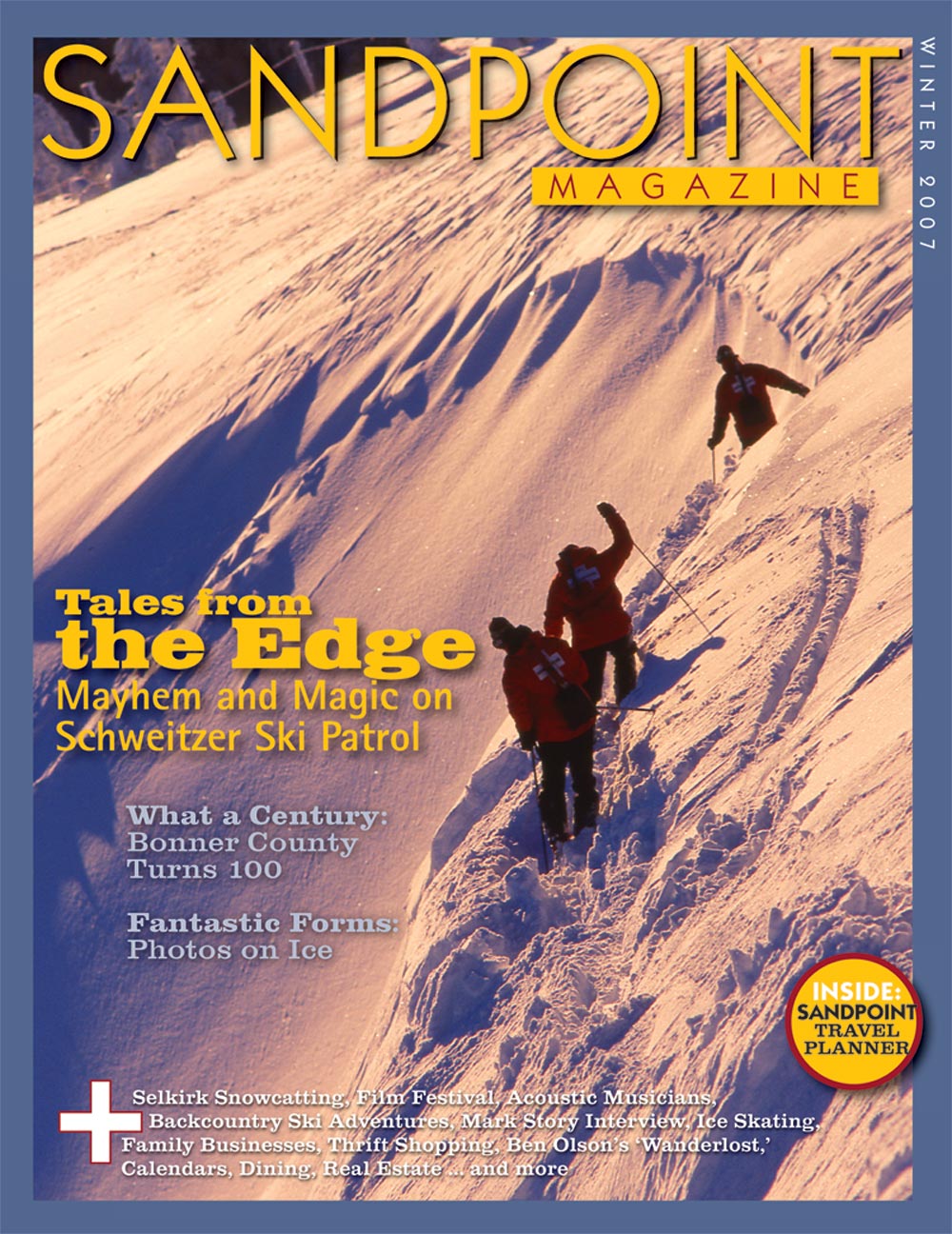 There is too much to do in such a short time when summer finally comes around…. this is the best of the best list of things to do in and around Sandpoint. Get Out There: 10 great adventures – Discover 10 outdoor adventures within an hour of Sandpoint, from paddling to flying.

Not everyone can go climb a mountain, but everyone else can read about Thadeus’s adventures in Returning to Shangri-la: A brief memoir on adventure climbing in northern Idaho, . The brave few can actually go try…The Short List: Two notable climbs in the Selkirks, Chimney Rock and Lions Head. For those that prefer a more civilised approach to outdoor adventure don’t miss the updates here in Going under the blade: Hidden Lakes closes to get a Jack Nicklaus redesign and a new name
Opportunity ripe to explore other area courses

Plus: three painters who paint on different canvases; a rock climbing memoir; Patrick McManus and his first novel, “The Blight Way”; Quest Aircraft and the Kodiak airplane; Extreme Makeover: Home Edition; and more. 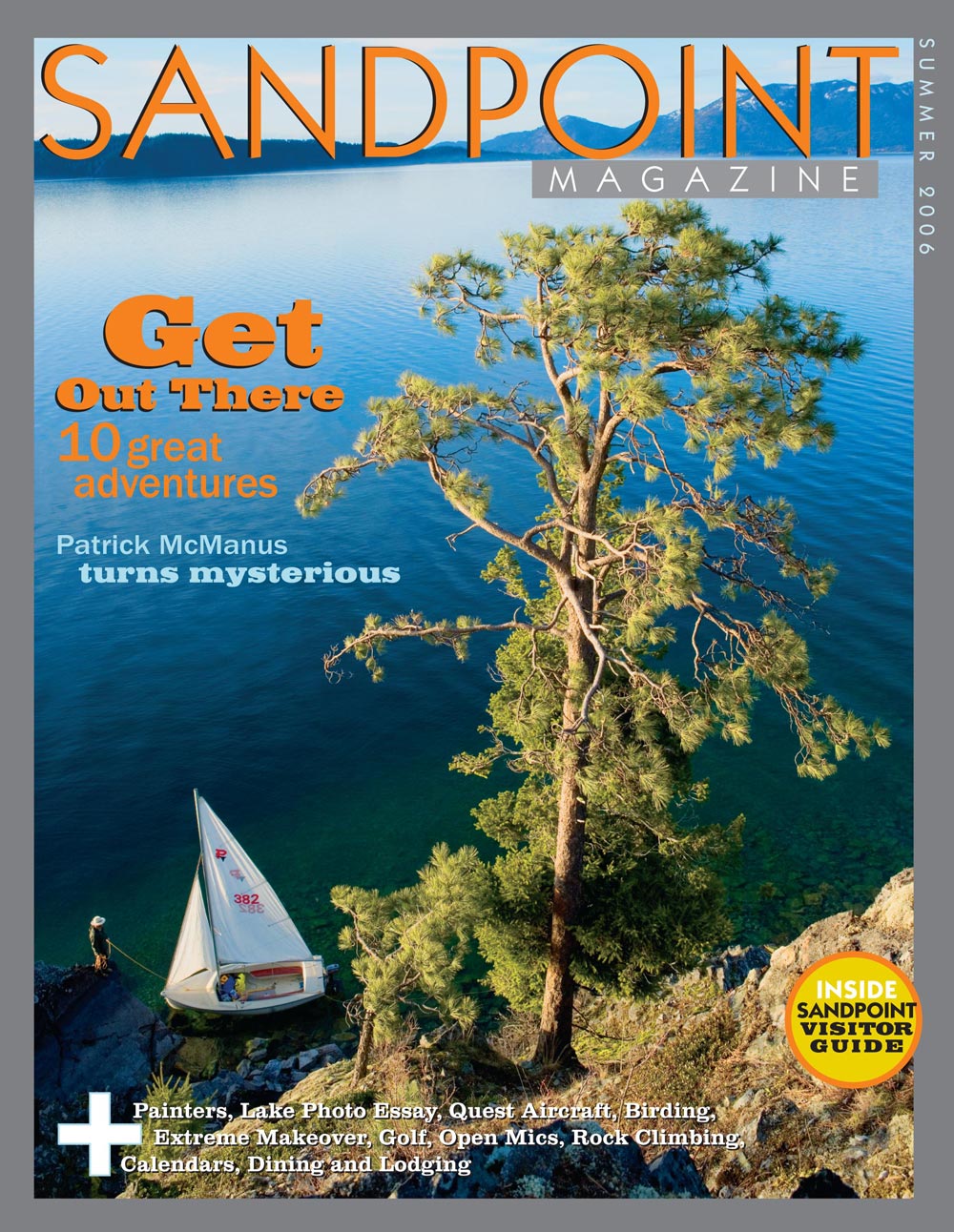