Here’s an issue to make you flutter, especially if you adore our feathered friends whooo join us each year for the snowy season. Check our photo-rich guide to winter birding in North Idaho. And for more wildness, read about urban moose plus the folks who search the woods for elk, deer and moose sheds.

And there is an avalanche of other stories to read by the fire. Stories explore the effects of climate change and what it means for our winters; the new summit lodge at Schweitzer; and a fond farewell to the Schweitzer Wang Shack. There’s an introduction to the sport of snow biking, up-close interview with Clark Fork native and Super Bowl Champ Ron Heller, and a peek at the artwork of Megan Atwood Cherry.

All that and … yes … more: Real estate, dining, lodging, things to do. Click to read it! 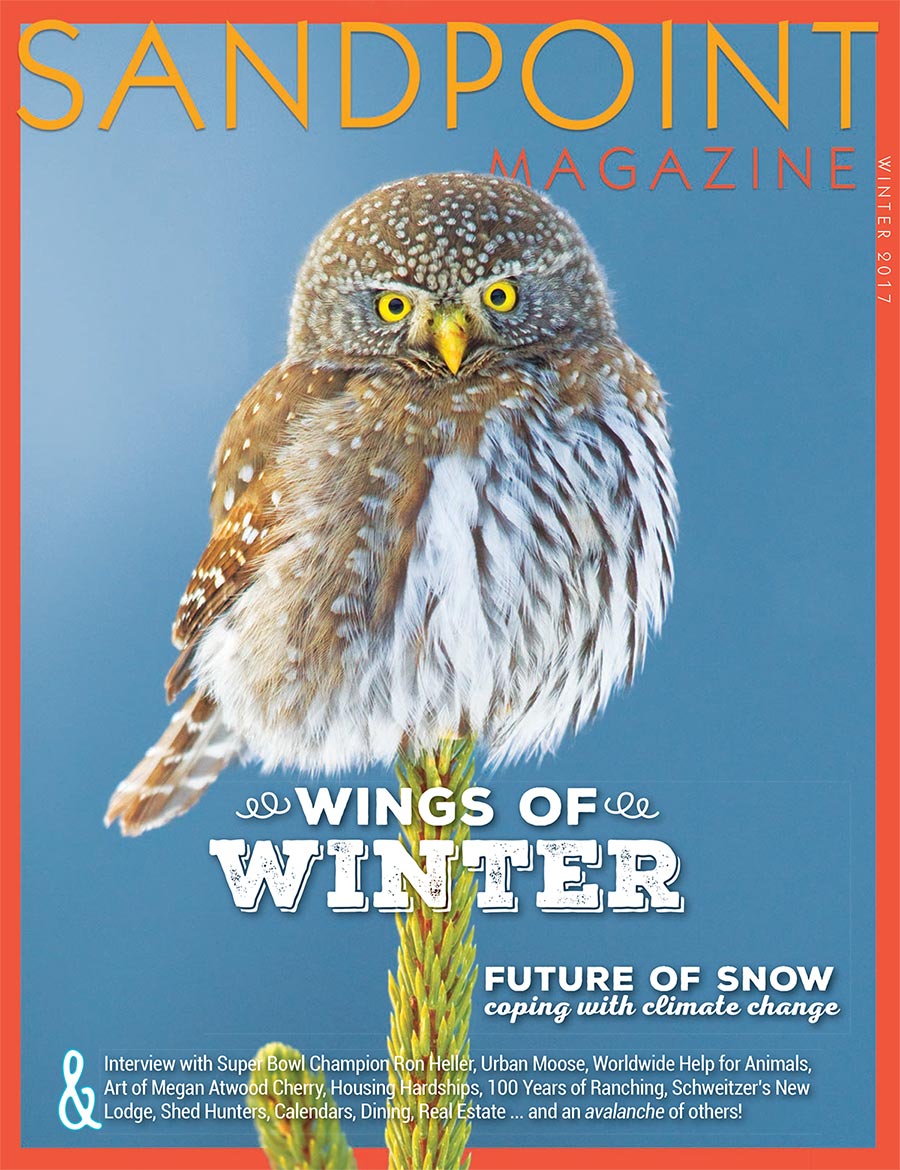 Sandpoint has gone to the DOGS. Yep, this issue is all about how our town is becoming a dog’s best friend. Explore Sandpoint’s dog-loving culture and meet some distinctive local dogs with fascinating stories. Plus check out the Sandpoint Ambassadog contest – and enter your own favorite canine to become Sandpoint’s official spokesdog.

Of course, that’s not all. Learn the history behind local peaks, how the Idaho Community Foundation is powered locally, the splendid satisfactions of sailing, super secret hiking spots, and what surprises lie deep down in our big lake. Meet organic farmers, the Phi Center’s charismatic Iris DeMauro, sculptor Steve Gevurtz, photographer Marsha Lutz, and seven generations of country gals. Read the history of Sandpoint’s 100-year-old railroad depot, and go bicycling on the International Selkirk Loop.

And more: Real estate, dining, lodging, things to do … all in our town’s flagship magazine. 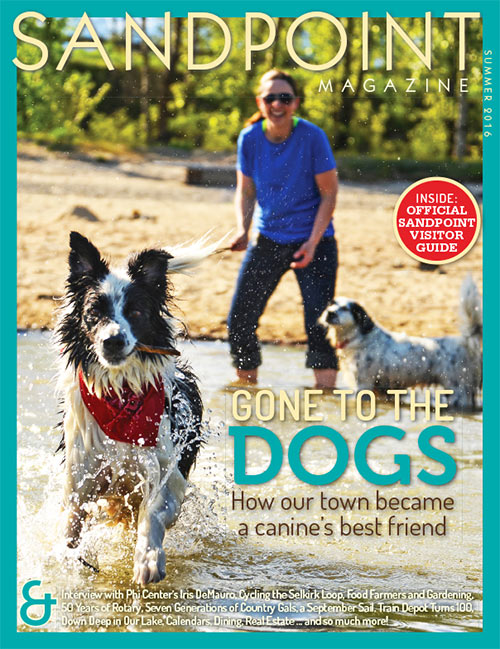 If you think Sandpoint Magazine’s been around awhile, you’re right. The Winter 2016 issue marks our 25th anniversary! For our silver anniversary, we take a stroll down memory lane with 25 for our 25th — highlights from 25 favorite stories. With a couple thousand stories published, choosing just 25 wasn’t easy!

Of course, that’s not all. We delve into the season with a veritable exposé on Winter, the season that defines us and,  frankly, occasionally denies us. Also out-of-doors, we explore skiing with Panhandle Backcountry plus the ski life at Schweitzer. We interview journalist Cindy Wooden, Sandpoint’s Vatican and Pope Francis connection. 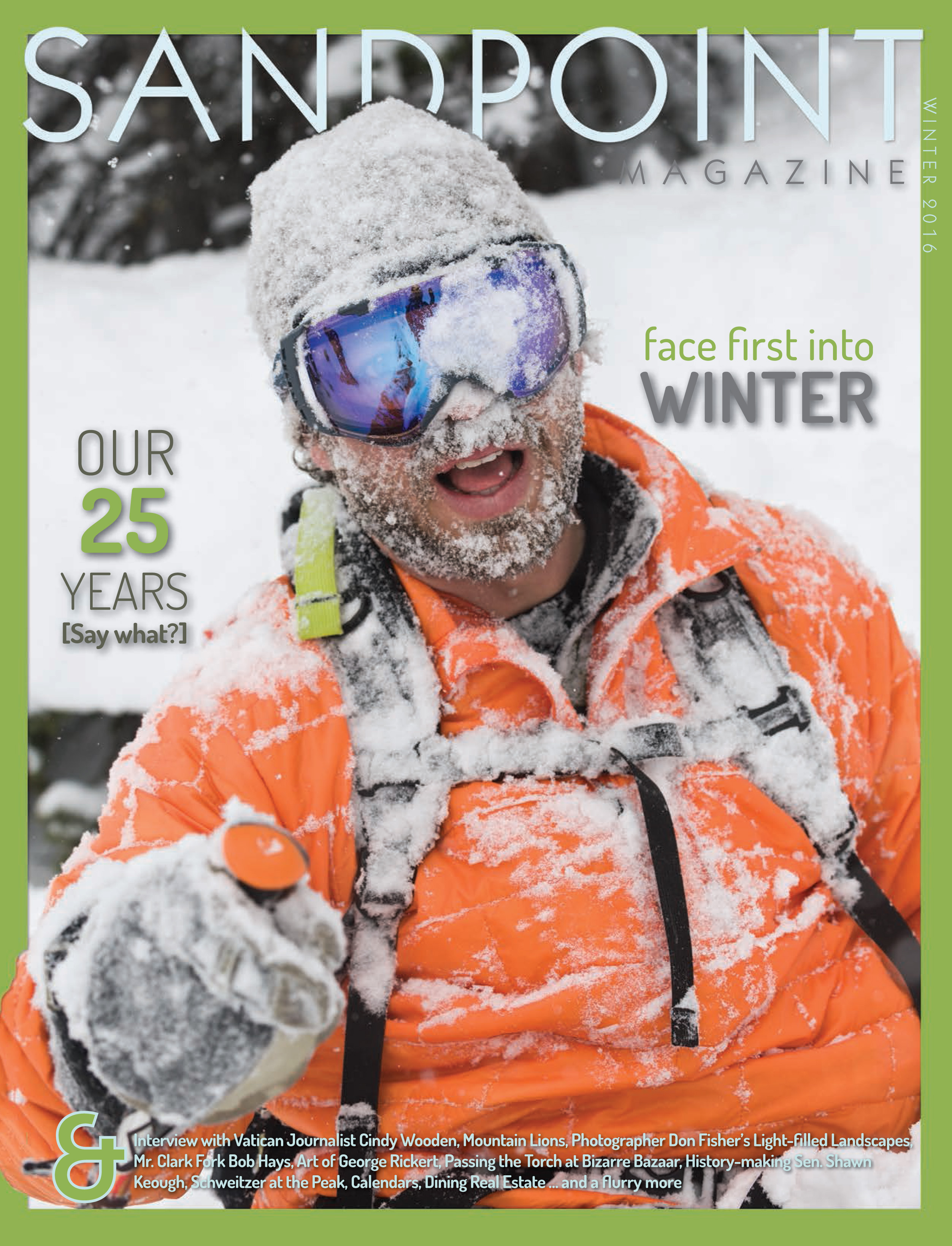 Uncovering the mysteries of the deep, Sandpoint Magazine reveals the secret lives of fishes in our waters – from the mighty Gerrard Kamloops rainbow trout to the bizarre-looking burbot. Read about kokanee and other famous fish of Lake Pend Oreille, sturgeon and burbot hanging in the balance in Kootenai River, and warmwater imports, not to mention excellent essays on furred and feathered fishers and crick fishing. 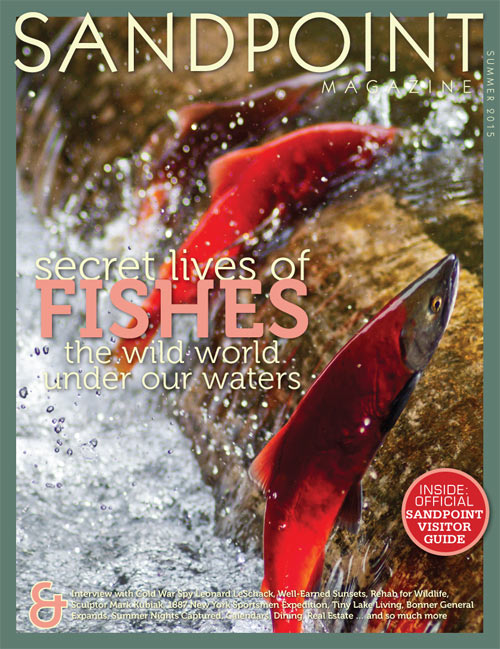 You needn’t be a local Sandpointer to get the whimsy of our Dances with Winter cover, with  boot-clad celebrants doing a happy dance on frozen Lake Pend Oreille. But as our Winter Dance cover story describes, the season brings a multitude of SSTD* once the snow falls and waters begin to freeze. Also in this issue: Visual treats from artist Catherine Earle … Schweitzer Lifties live the dream … Kirk Miller’s fantastic sunrise photography … the sawmill revolution that technology hath wrought … Sages of the Skies, profiling two aviators … an interview with Iditarod Chief Veterinarian Stuart Nelson … a terrific winter wildlife photo essay … riding the rails, Amtrak style … in Coldwater Creek’s wake … and so much more. Winter’s here. Time to put on your dancing’ Sorels!
*That’s Stupid Stuff To Do in winter 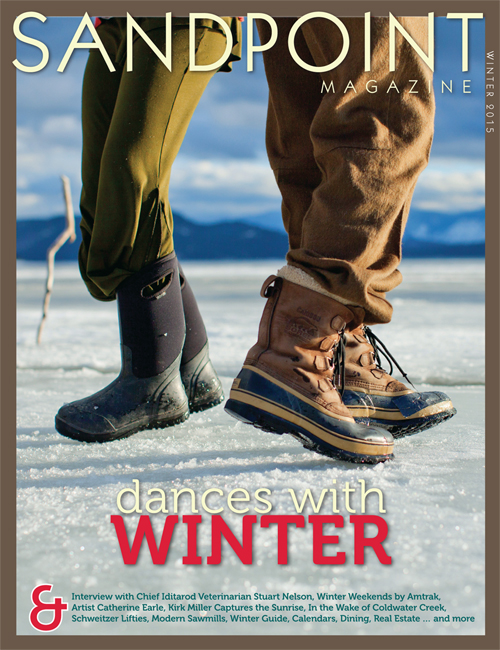 Trains seem ever-present around Sandpoint – and in fact, they have been since our town’s very beginning. Ever since the first tracks were laid here in 1882 with the sweat of Chinese laborers, trains have provided industry, transport and a soundtrack to our lives. With traffic increasing due to coal and oil transport, trains are poised to be an even larger presence. Get aboard, for our exclusive package of stories on the trains in our lives. Plus: An interview with beloved singer-songwriter Charley Packard … following in the photographic footsteps of Dorothea Lange … Ethan and His Fantastic Treehouse … Quest Aircaft soars … Coldwater Creek goes dry … and a veritable trainload more!

December 4, 1963 was a huge day for Sandpoint … the day Schweitzer vaulted from a gleam in the eyes of a few die-hard skiers into a bona fide ski mountain. As Schweitzer celebrates its first half century, here’s a look back at its storied history.

Also: An exclusive interview with former Soviet spy and bank robber Christopher Boyce. Boyce was the subject of the true-crime book and movie “The Falcon and the Snowman,” and he fled here to hide in 1980-81 while U.S. Marshals scoured the globe to capture him. Now paroled, his is a fascinating story that echoes current themes of treason and government abuse. 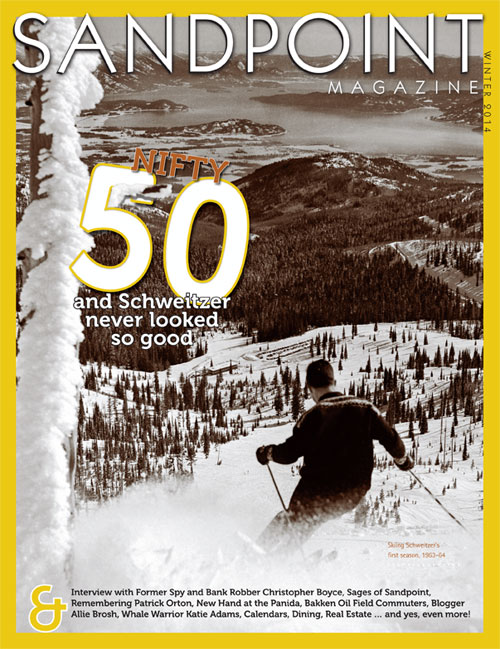 ARoooooooo. Did you hear that? Once nearly eradicated from the western United States, wolves are making a strong comeback. Our cover story Return of the Wolf covers the contentious revival of wolves here – a thrilling fact for some, infuriating for others.

Also featured in a magazine stuffed full of great stories: Sandpoint on the Salmon, in which an intrepid band of locals take the town with them down Idaho’s famous Salmon River.

PLUS: Interview with filmmaker Ted Parvin … a History of Sandpoint in 10 Objects … Ultimate Frisbee on the rise … the Cedar Street Bridge at 30 … Entrepreneurs of Sandpoint … a ‘Carpe Diem’ Photo Essay … and a whole pack more. 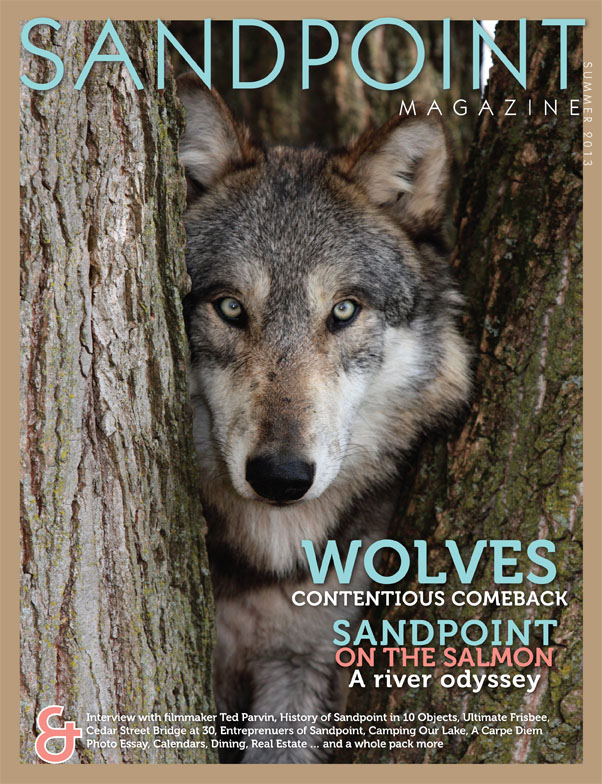 For our Boundless Backcountry cover story, it’s into the hinterland – times three, as our intrepid writers strap on the backcountry skis and boards for trips to Roman Nose, Caribou Mountain and the “wild west side” of Schweitzer Mountain. 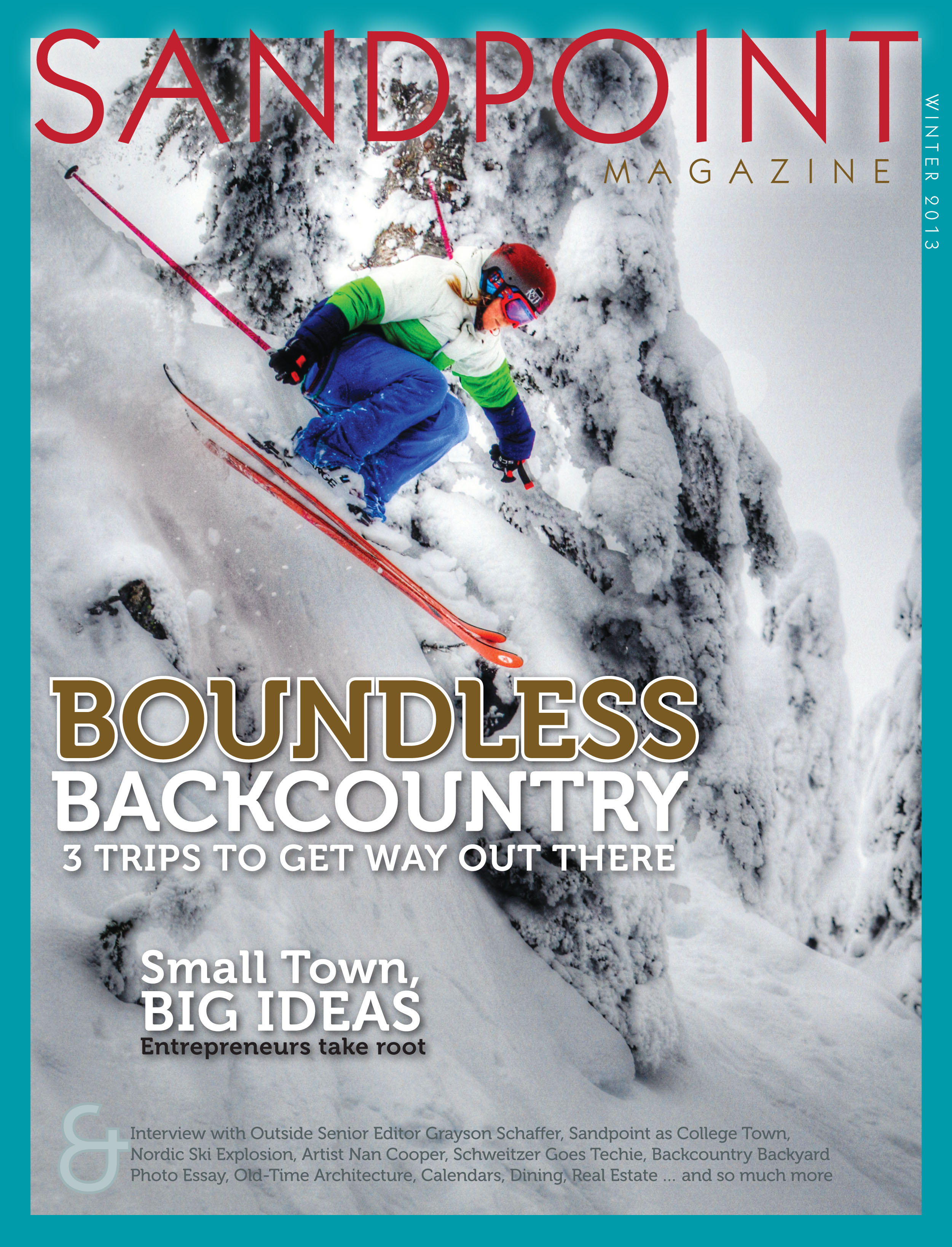 They’re ubiquitous here, around Lake Pend Oreille and other lakes and streams. In our Mighty Osprey cover story, learn about the magnificent and fascinating ‘fish hawks’ that dive completely under water to catch fish with a natural history that amazes.

Among a pile of other features, the Potters of Sandpoint will introduce you to crafters of sublime ceramics, while A Million Feet from Five Dollars takes us back to Sandpoint’s mining history.

PLUS: Interview with Astronaut John Phillips … Our Farming Heritage … the Public Art Explosion … the Rise of Downtown … a Selkirks Lake-Hopping Adventure … and a whole lot more.