Summer of the Sasquatch

By and photo by Susan Drumheller

While rafting the Moyie River last May, my friends and I saw an unusually tall, hairy figure striding through the pines on the riverbank.

“Look at that,” someone yelled. It turned and crouched in a half-threatening way, and I snapped a photo before the runoff-swollen river carried us away.

We laughed, giddy from the rapids we’d run, guessing we saw some local, on drywall stilts and dressed up like legendary Sasquatch, getting his jollies by spooking boaters on Memorial Day weekend.

I couldn’t resist sharing the photo, and so my frozen-solid Sasquatch cynicism began to thaw. Even if our sighting was a hoax, the tales it unleashed justified a deeper look into the local legend of Sasquatch, aka Bigfoot.

Sandpoint local Christine Kester never really thought much about Sasquatch until she saw three strange creatures while backpacking in the Mallard Larkins Primitive area in 2001.

The Mallard Larkins is perched in the headwaters of the St. Joe and Clearwater rivers. Kester and her companion were well into their journey, on a ridge above Heart Lake, when they looked down and saw two large figures and a dog—or a pet bear—“hanging around like a happy family” in a marshy part of the lake, Kester said. The two-legged figures were startled by the hikers on the ridge and started running.

“They were running like kids,” Kester recalled. “Their arms were out in front of them, and they were jumping over logs like they were nothing. I said, ‘Check out their dog. It’s a bear! And those people are all brown!’”

They disappeared in the trees, she said. “And we both looked at each other like, did this really happen? … To this day I regret we didn’t go down and look for footprints.”

Kester reported her sighting to www.BFRO.net, the website for the Bigfoot Researchers Organization. They collect stories from North America, categorize them, then post the most credible.

Turns out that Bonner County is a Sasquatch hot spot, with more recorded sightings than any county in Idaho. In fact, there’s a backlog of 22 incidents awaiting review, according to Kevin Llewellyn, a volunteer with the site.

It’s no wonder such a Bigfoot breeding ground would also spawn a Sasquatch Club. 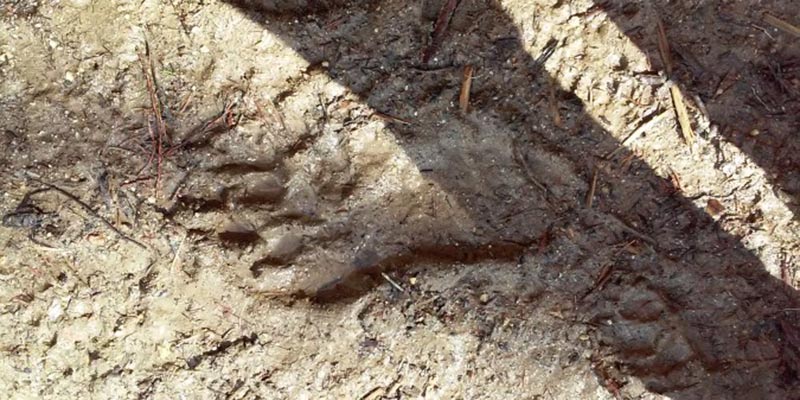 Sandpoint High students Kjetil Lund Anderson, Wyatt Waud and Kieran Wilder started the school club this year. It has about 15 members. As avid “Squatchers,” I asked them to look at my photo, which they scrutinized and concluded was not legit.

“The legs look long proportionally to the arms,” Waud noted, as Lund Anderson pointed out that “Sasquatch don’t have long hair coming off their head. It’s shorter and all over the body.”

While some “Squatchers” explore the woods for evidence, these students are interested in sharing the information and discussing wide-ranging theories: “Anything is really possible, unless you’re sure it isn’t,” Wilder said.

Fearing ridicule, many people are loath to speak up, Llewellyn said. He did share the story of a Bonner County couple who reported seeing a Sasquatch up Hellroaring Creek in the Selkirks, while bear hunting last September. They spied a tall black figure, about 7 or 8 feet tall, with a round head, no ears and very wide shoulders about 75 to 100 yards away. It stared back.

“At this point I have tears in my eyes and am scared to death,” the woman wrote in her report. “We are 100 percent positive this wasn’t a bear or person.”

North Idaho sightings aren’t always in remote areas. A few months earlier, Sherrita Hall was Sheriffdriving from Tensed, Idaho, to Moscow, to pick up a pizza. She had just passed the rest area on U.S. Highway 95, south of McCroskey State Park, when she saw a tall, two-legged, hairy figure come up on the left side of the highway and pause at the shoulder’s white line. She slowed down as she passed, and “I kept looking back,” she told me. “That’s why I hit the deer.”

While inspecting her car, “a creepy feeling came over me,” so she drove off before calling the cops. The accident diagram on the Latah County Sheriff’s report is complete with dead deer and car on the highway, and, off to the side, a tiny Sasquatch image pulled from the notorious Roger Patterson film. 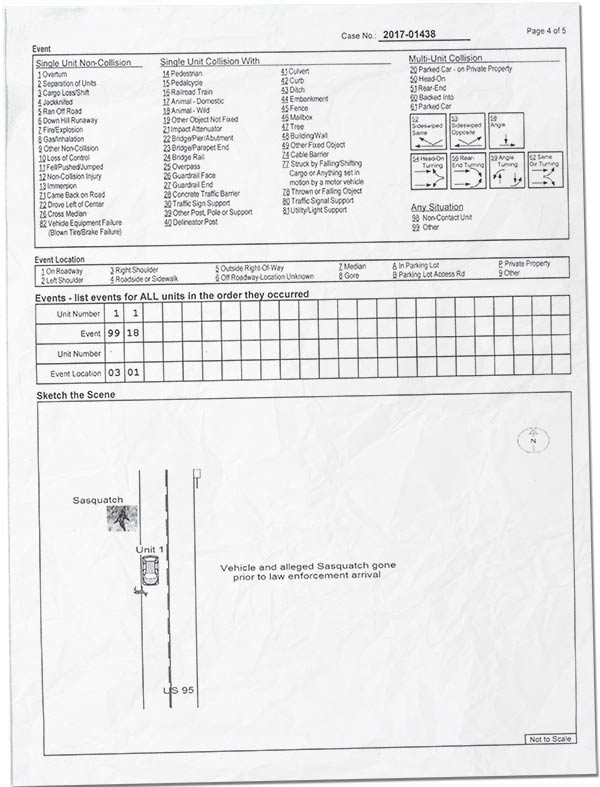 Sasquatch stories have been passed down by Native Americans for centuries, but “Bigfoot” was penned by news reports after large footprints were found in 1958 at a road construction site in Northern California. Roger Patterson visited the site many times, and caught a female Sasquatch on film in 1967, an image as hotly debated as the film clip of the Kennedy assassination.

Soon after the incident, Patterson took his film on the road, stopping at the Spokane Coliseum. In the audience was then- 11-year-old Jeffrey Meldrum. For Meldrum, the existence of Sasquatch isn’t a matter of belief, but of science. Now a professor of anthropology at Idaho State University, he lends credibility to Sasquatch research and Bigfoot reality TV shows.

He didn’t take Sasquatch seriously until he saw footprints in the Blue Mountains, near Walla Walla, Washington. (Meldrum also has a degree in anatomy and his specialty is bipedal locomotion.)

“To my eye, they were stunning,” he said of the Blue Mountain footprints. “The hook was set hard and fast… . I have since seen example after example that just confirms all the insights this set of footprints revealed to me.”

Meldrum has collected about 300 print casts. The idea they all are fake is more preposterous to him than what the evidence says—that a large, ape-like animal with flexible flat feet is wandering the woods of North America.

When he offered a class on “relict hominoid inquiry”—exploring whether relics of our homo sapien family tree could potentially exist—other professors at the university urged their students to not take the class, he said.

Yet, Meldrum isn’t universally dismissed by academia. The famous primatologist Jane Goodall wrote an endorsement for his book, “Sasquatch Legend Meets Science.” And as research methods improve, using DNA and other tools, Meldrum is confident his inquiry may gain more acceptance.

“I’m not trying to convert my colleagues,” Meldrum said. “I’d just like an open-ended consideration of the evidence.”

Until then, Sasquatch may be regarded as more akin to the unicorn than as a distant relative of man who migrated to North America across the Bering land bridge tens of thousands of years ago.

Members of the SHS “Squatch” Club are sure Sasquatch is out there, along with other elusive megafauna, like grizzly bears and wolverines. And like them, they worry Sasquatch is imperiled.

“My biggest concern is protection of habitat,” Waud said. “We can conserve him if we get enough believers.”

2 responses to “Summer of the Sasquatch”