Morel mushrooms give a taste of earthiness, rich and nutty, complex and layered, that­ store-bought white caps can never compare with, and they are basically free-for-the-picking in our North Idaho forests. A good place for a new mushroom hunter to find them is in areas that have burned.

The morel’s relationship with fire is still unclear, with plenty of theories but few proven facts. In his book, “The Mushroom Hunters,” Langdon Cook writes, “What’s known for sure is that, given the right habitat, morels in the West will respond to disturbance. The disturbance could be logging, or trail maintenance or road building. Most often it’s fire.” He adds, “What is known is that a forest fire in the right coniferous habitat can produce a bonanza of morels.” 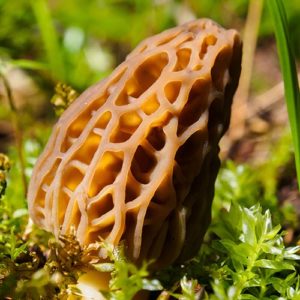 Thanks to the fires of 2015, the summer of 2016 has been called the greatest mushroom flush ever seen in the West. People came out in droves and everyone left with their buckets full. I counted my own harvest on one day just for fun: 534 morels picked in just over two hours.

The prime time for morel hunting in North Idaho is May and early June. As the temperatures rise you must go higher in to the mountains to find them. But professional pickers are usually done in June, so high mountain morel patches can be relatively untouched. One picker found a bonanza of mushrooms in July at an elevation over 4,000 feet. The burn was carpeted with morels. In one space, no bigger than a dining room table, 40 morels as big as mason jars were harvested.

There is only one toxic mushroom—the false morel—that looks similar to the distinctive, wrinkly-capped morel mushroom. A true morel will always be hollow.

The first year after a burn is the best time to go morel hunting, though some say the next year can be equally good. So in spring, when the yellow violets start popping, grab yourself a five-gallon bucket and head to last year’s burn areas: you won’t be disappointed.