A kayaking adventure from the base of Lake Pend Oreille

In the presence of magnificence, one is rendered speechless. Being loosed from thought, deep peace is experienced. Perhaps that is what calls us to the mountains, rivers, and lakes of this incredible place where we live.

I heard the call from Lake Pend Oreille. A kayaker for many years, I had heard of people circumnavigating the 111-mile

shoreline. This idea took hold of me and wouldn’t let go. The problem was finding the time and fellow kayakers who shared the same desire ­— to see this magnificence, to feel this lake by riding just a few inches on top of it. The answer came in the form of my best friend, Susan Drinkard.

Work commitments made it impossible to complete the entire trip all at once, so we broke it down into sections. We planned two, three-day weekend trips to paddle the west side of the lake. Subsequently, we completed the east side of the lake in a five-day camping and paddling trip with two more kayaking friends. What follows are some of our more memorable adventures. –Sandy Bessler

It was a hot August morning at the Farragut State Park boat launch where Sandy’s husband, Chris, helped us unload our gear at our starting point. Our goal was to paddle to Garfield Bay, where Susan’s husband, Stephen, would pick us up. That was the plan, anyway.

It took us an hour to organize and pack our gear and provisions into every nook and cranny of the kayaks. Then the gear had to be reconfigured after a uniformed park service officer came over to make sure we had current Invasive Species stickers. She proceeded to “inspect” our gear in various compartments, leaving us perplexed. Did we look like mules running drugs to Evan’s Landing? 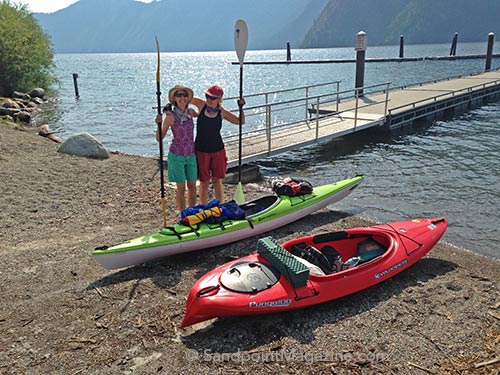 This leg is remote. The mountains plunge straight down into deep water. There are no houses and no beaches, all well and good unless you have to make a pit stop. Visualize water knocking our kayaks into the rocks on the steep shoreline: there is no shallow water for miles. It was a balancing act to step from an unwieldy, rocking boat onto a cliff while holding on to a boat leash.

We spent the first night at Evans Landing, and the next at Talache Landing, where we skinny-dipped under the moonlight.

Sleeping was short circuited by strong gusts. We set up the tent amidst blowing winds with two ill-fitting headlamps that kept sliding down into our faces. The wind was howling, the trees were cracking, the thunder boomed, and lightning flashed. At first light we looked across the lake and observed a lightning strike start a fire; Sandy called 9-1-1 to notify authorities.

We looked north. We looked south. We saw weather coming from both directions. Then we looked at each other, and called Stephen to come get us.

Air temperatures were still quite warm in late September when we completed the second three-day leg. Camping spots are difficult to find between Talache Landing and Sandpoint City Beach, so friends Nancy Gerth and Jim Akers volunteered their sailboat at Glengary Bay. A big, handwritten sign hung high on their boat to welcome us: “Sandy and Susan sleep here.”

It was a full moon weekend and Susan’s birthday when we completed kayaking the western shore of the lake. Kayaking our lake — what a gift. 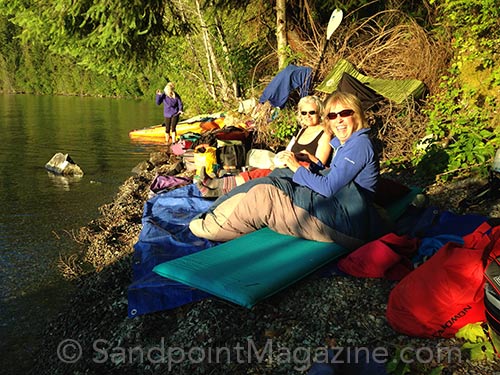 Due to a heavy fire season, a smoke-filled summer passed before we could complete our goal of kayaking the lake’s entire shoreline. With big miles of heaven under our belts, we wanted Mecca — the pristine eastern shoreline. With a paddling limit of 8 to 10 miles per day, we knew our third leg would take about five days to complete. We invited a couple other gals to join us: Joyce DeLaVergne, retired Sandpoint teacher, and Becky Patchell of Whitefish, Montana. Our plan was to put in again at the Farragut State Park boat launch and paddle to Sandpoint City Beach, 43 miles of big, deep water away. All four of us have ties going back to the 1980s, but the tie that bound us here was our love of kayaking.

We held a one-hour planning meeting at the downtown Starbucks with Sandy’s waterproof map of the lake and Joyce’s thorough list of what to bring.

Joyce and Sandy worked their arms diligently for a few weeks after a session with a personal trainer at SWAC. Susan did some lifting at the gym, not as diligently, and Becky’s yoga routine required lengthy pose holding. We felt strong enough. It wasn’t going to be a race, after all.

We left Farragut State Park at 11 a.m., Saturday, June 25, our boats so heavy with food and gear we could hardly carry them to the water.

Within the hour we saw a mama Rocky Mountain goat and her two kids high on a slope so steep it looked as though they were stuck up there with Velcro. We paddled to Whiskey Rock Bay Campground, but with all 10 sites taken, we had no choice but to paddle onward, to what we weren’t sure. We were so tired when we found a tiny “beach” a fisherman told us about, another mile north. Beach was a misnomer: we had to tie our boats to trees and squeeze our sleeping bags onto a tarp — no room for a tent. On a slight incline, with poison ivy at our heads and the lake at our feet, we kept waking to ensure our bags weren’t in the water, and our heads were not pillowed on poisonous plants.

We had no turbulent water and the wind was often at our backs. This is not always the case, as this area is known for high winds and rugged water that have thrown many a kayak into the rocks.

We had a worrisome half hour or so when three of us could not locate Sandy. She tends to absorb the environment, studying the shoreline, the mountains, the cliffs, the plants. We shouldn’t have worried, as with the sleek kayak she rides, she caught up in no time.

We saw loons, chipmunks, mergansers and golden eagles; swallowtail butterflies were a feature at every stop. We camped the second night on a small beach between Indian Point and Deadman Point along the Green Monarchs, with breathtaking gigantic rock formations and pristine beaches. The only sign of previous campers was a campfire ring and heart rocks strategically placed on logs. Becky and Sandy put up tents. Joyce and Susan wanted the stars and the exposure and slept on mats all four nights. Sandy, Becky, and Joyce were tidy campers; Susan was teased about her underwear dangling from trees and bushes wherever they landed, always in some state of wet.

We did not want to leave the serenity of the Green Monarchs. There were three- and four-hour periods with no boat of any kind in sight, perfect temps in the low 80s, calm water, and down time to skinny-dip and to eat and to drink wine. At one point as we sat facing the water, a blue heron flew by, seemingly in slow motion, right in front of us.

When both Sandy and Susan burned their hands, Becky applied wet moss and it healed us quickly. Joyce kept us informed about the lake while Sandy’s expertise with her water filter kept us hydrated as she pumped lake water into bottles at many stops. We kept prolonging our stay at the Monarchs, stopping at many beaches, putting off the inevitable return to people and what ails us.

Finally, we paddled to Beyond Hope Resort, with a campsite reservation on sweet, soft green grass. We were tired and also profoundly hot and thirsty, and not for water or wine — we wanted beer.

Spotting the Canadian flag on an RV in the campsite, brave Sandy and Becky asked its residents if we could buy some beer. A resounding “NO” was the response, but they said we could have as much as we wanted. They brought over a six-pack of beer and a bag of ice and Becky gave them an avocado and some turkey jerky. They visited later in the evening and shared their strong opinions about Canadian Prime Minister Trudeau, along with some eye rolling about The Donald. The next morning they sat on a bench on the beach and waved goodbye, seeing us off.

We spent the fourth night on the end of the Sunnyside Peninsula near Hawkins Point at the Twin Cedars tipi. With hot water, cots, an outdoor shower, and a porta-potty, we felt spoiled. (Check it out on Airbnb.)

Our last day was long and hot. We stopped at Fisherman Island for lunch and swam at Kootenai Point. We paddled for hours to City Beach, where we had a beer on the deck at Trinity, happy, but sad that we weren’t going back to the water to get into our kayaks again.

We lost two pairs of sunglasses, a pair of paddling gloves, and a hairbrush to the bottom of the lake, but we gained arm strength, became better friends, and spent five peaceful days in the wilderness of water, in the presence of magnificence.