Ospreys Birds of myth and fortune

Osprey in the northwest and around Sandpoint, Idaho

A certain storied mystique shrouds ospreys. Though the birds of prey are found on every continent but Antarctica, they still inspire, amuse and awe anyone whose interest they capture.

For centuries, they have been praised in literature. Written 2,500 years ago, China’s oldest, most celebrated poem, “Guan ju,” begins “Guan guan trill the ospreys on the islet in the river.” The Corps of Discovery expedition team recorded them, Lewis noting a “white-headed fishing hawk,” and Clark describing “the Crown of the head white, and back of a milkey white.” 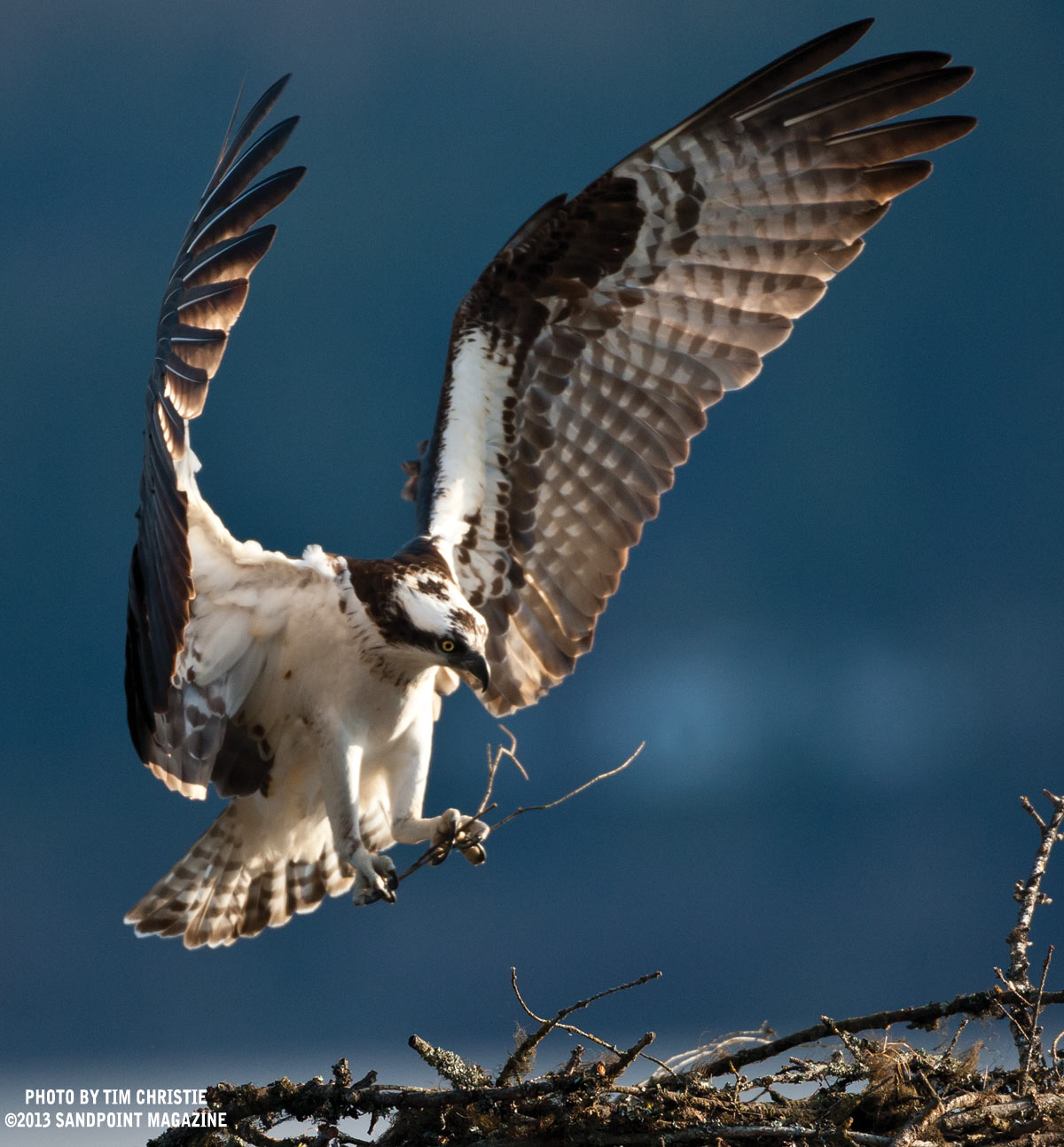 Even the ospreys’ various names have inspired much pondering: The genus Pandion is perched in the Greek mythological family tree, from King Pandion of Athens whose two misled daughters and devious son-in-law, Tereus, were all turned into birds – the daughters into a nightingale and a swallow, and Tereus into a hawk. Many bird enthusiasts think designating ospreys as Pandion (rather than Tereus) was a bird-brained move by ornithologist Jules-César Savigny in 1809. The species name (haliaetus) – from Greek halos (“sea”) and aetos (“eagle”) – is also a misnomer: “Sea hawk” seems more appropriate. And the etymological tracings of osprey are also disputed. The most accurate label is “fish hawk,” as ospreys are the only raptors that almost exclusively eat live fish.

Despite nomenclature uncertainty, the return of ospreys to area shorelines each mid-March to early April assures spring’s arrival. In many places, their homecoming or a nearby nesting pair symbolizes luck. Here, we are fortunate to have one of the largest osprey breeding populations west of the Rockies. They have thus become mascots of sorts, catching people’s attentions with their distinguished white underparts and head, M-shaped wingspan that can reach 5 feet, and dark stripes that extend from their eyes down the cheek.
Their luck and notoriety also apparently secure them front-pole seats at the annual music extravaganza that turns 30 this year: According to Festival at Sandpoint Board Member Marilyn Sabella, the ospreys have been the Festival’s biggest annual supporters – and crowd-pleasers.

“People are always delighted the first time they see and hear them. They point up at them and make sure their friends and neighbors see them,” Sabella said.
Festival Executive Assistant Toni Lund said, “People ooh and ahh, especially on symphony night, (the ospreys’) favorite night.”
Sabella agreed: “They seem to love classical music. They swoop in time to the music and sing along.”

They “show off,” displaying their catch, trilling their distinct shrill kyews (or guan in Chinese, apparently), and then take in the show atop a pole, often receiving as much adoration as main-stage acts.

This fact hasn’t been lost on festival poster artists: An osprey takes center stage on Ward Tollbom’s 1988 poster; a cartoony Pandion perches on Moozart the Moose’s antlers in Bonnie Shields’ 1997 poster; and one swoops to the music in Carver Kearney’s 2010 poster.

These birds may soar to even higher celebrity with installation of a webcam – placed under guidance of Keokee Co. Publishing, Inc. and the City of Sandpoint above one of two new nesting platforms erected as part of a Memorial Field restoration project. Inspired by the Eagle Cam in Decorah, Iowa, which has drawn millions of viewers, the osprey webcam will give people a glimpse into the behaviors and biology of these fascinating birds.

Janie Fink, a raptor biologist and Birds of Prey Northwest (BoPNW) executive director, serves as a webcam consultant. She believes the camera will help viewers understand all the complexities and intricacies of nest building, breeding, and raising young. Fink became involved in the webcam project due to BoPNW’s conservation efforts and involvement with Avista in resolving nest issues. Founded in 1993, BoPNW’s mission is to promote “stewardship and conservation of raptors through educational programs with live birds of prey … (and) provide medical treatment and rehabilitation to injured birds of prey with the ultimate goal of returning them to the wild.”

Fink hopes people will be fascinated by ospreys’ biology and their uniqueness. In her words, “There’s nothing else like the osprey.” And indeed, they are singular enough to be the only bird in the Pandion genus and Pandionidae family, truly one of a kind.
Having dedicated much of her career to handling raptors, Fink spent five years working with Wayne Melquist, a retired northern Idaho nongame manager and prominent osprey expert. Fink worked with Melquist during the 2000s, capturing almost 100 ospreys from the Sandpoint and Coeur d’Alene basins for reintroduction into South Dakota, where ospreys were threatened. According to Fink, Melquist spent 30 years scaling trees, climbing ladders and being lifted in bucket trucks, all to band birds, establish informational databases, track migratory patterns and reestablish threatened populations.

What is the ospreys’ most distinct characteristic? “Clearly, it’s how they hunt for fish and crash into the water at 30 mph,” Fink said.
To see ospreys’ artful angling is to watch piscatorial perfection. They hover and soar in search of fish near the surface. They dive, feet first, from as high as 120 feet, sometimes completely submerging. Fink says their dense plumage, dislocatable shoulder joints, underwater vision and fleshy nostrils that close allow them to plunge unaffected and then immediately fly with their catch. Their success is nearly certain, largely due to spiky scales on their talons and an opposable toe they can rotate to allow them a two-toed grip on either side of a fish. They will carry fish weighing half their weight, rotating the fish so its head faces forward for streamlined flight.

Ospreys nest atop trees or manmade structures like utility poles, buoys, bridges or any high spot away from predators. Their nests can resemble 400-pound, found-object art installations crafted of sticks, moss, bones, toys and, quite possibly, lost sandals. Unfortunately, ospreys also gather trash such as six-pack carriers, twine and fishing line, which can cause strangling or starvation of birds. And because they are loyal in returning to the same nest – and the same mate – each year, ospreys may add so much material that nests can potentially collapse under their own weight.

Come April, females lay two to four brownish mottled eggs. Although either parent will sit with the eggs, females do most incubation, typically for a month, leaving the males to provide half-digested fish bits. Although young ospreys typically fledge and begin fishing after seven or eight weeks, ospreys have had to resort to denying food to resistant fledglings that sometimes “run away” to a nearby nest. Once grown, the sexes have few distinguishing characteristics in appearance, except that females can weigh twice as much.
Thanks to Melquist’s research, we now know that, like other area snowbirds, northern Idaho ospreys begin their southward journey in September and into early October. Melquist’s banding helped trace them as far south as the Pacific coast of El Salvador, Honduras and Costa Rica – a journey of up to 4,500 miles in about a month. In an average life span of 15 to 20 years, ospreys can wing potentially 160,000 or more migration miles. Fink says young birds make their first journey to southern wintering grounds, where they remain until reaching sexual maturity in their second year, and then head north again; unpaired males begin nest preparation and await a female who reportedly chooses her mate based on the quality and location of his nest.

Although northern Idaho has been a stronghold for ospreys, numbers everywhere plummeted in the mid-1900s, due to human use of DDT and other contaminants in agriculture. These pollutants trickled from farmlands to waterways; they then traveled the food chain, eventually causing reduced reproduction and eggshell thinning in ospreys – as well as bald eagles, peregrine falcons and songbirds. DDT use was banned in the United States in 1972, and osprey recovery has been steady since. However, avian biologist Colleen Moulton of Idaho Fish and Game says that, due to continued use in wintering grounds, DDT is still being detected in ospreys’ blood and eggs in the Pacific Northwest, although levels are not enough to cause significant problems.

Ospreys were never placed on the national endangered species list, but they are still endangered in Ohio and threatened in Pennsylvania, New Jersey and Indiana. Within the past five to 10 years, ospreys have been removed from many other states’ lists, particularly in North Atlantic coast and Great Lakes regions where they were most affected.

Today, the U.S. Fish and Wildlife Service lists ospreys as a species of special emphasis. They are also considered an indicator species that informs us of environmental imbalances, and are protected by the U.S. Migratory Bird Treaty Act, which defends them from being pursued, captured or harmed in any way. Moulton says that populations have now either reached or exceeded historic numbers in most locations – numbers the National Audubon Society estimates at around 460,000 globally, with North American populations around 211,500.

Moulton says recovery has largely been due to the DDT ban, the installation of artificial platforms, reintroduction efforts and heightened awareness of the sensitivity of nesting birds. Maybe their innate fortune even aided the comeback.

And so, the fish hawks’ story continues. Each sighting along the lake, each kyew heard on the wind and each click onto live-streaming nesTV will likely inspire more poetry, mystique and amusement – especially for those of us lucky enough to live among the abundant one-of-a-kind raptors.

2 responses to “Ospreys Birds of myth and fortune”