Just after dawn, the water wolf holds motionless in the lee of a submerged log. Her long body dappled the same green as the sunlight reflected across the silt bottom provides perfect camouflage. Water caresses her fins, making the dark striations appear as floating shadows from nearby weeds.

Northern pike, known as water wolves, emigrated downstream from Montana where they were probably stocked unlawfully by “bucket biologists” – anglers who introduce a nonnative fish to local waters, often to the detriment of existing fisheries.

According to the Idaho Fish and Game (IFG) Panhandle Region Fishery Manager Jim Fredericks, pike reside in low densities in the Idaho portion of the Pend Oreille (POS) system: “They haven’t really taken off below Cabinet Gorge Dam, I think largely because they’re not able to effectively spawn and reproduce.”

Considering that a pike needs to eat 5 to 10 pounds of fish to gain a pound of body weight, their small numbers spare other fish in the system.

A spindle-shaped school of yellow perch hugs the bottom, swimming past a submerged pile of brush. The vibrations of their movement excite internal shivers down the pike’s lateral line, specialized pores that allow fish to sense pressure and movement, but externally she’s unshaken.

The U.S. Fish Commission brought warmwater game fish, including yellow perch, to the Pacific Northwest in the late 1800s. While generally abundant throughout Bonner and Boundary counties, perch begin spawning after “ice-off,” which  means strong weather events like windstorms can blow their eggs on shore and negatively affect their populations.

“They have strong and weak year classes,” said Fredericks. “That’s just something that perch typically do.”

The olive-striped perch move over the log. A shattering lunge erupts into the school. A shovel-shaped maw gapes and then plunges sideways into the belly of a fish, driving it forward away from the others. The sharp canine teeth of the pike’s lower jaw impale the struggling perch. Rows of backward slanting teeth line the roof of her mouth, allowing the pike to maintain her grip as she works up the flailing body. Her jaws encompass the head, turning the live perch into her waiting gullet. The perch’s frantic tail flips, propelling it farther into the body of the pike. Content, she settles to the bottom to digest her meal.

In late spring, as shallow water temperatures approach 60 F, a male largemouth bass searches for a nest site, one with sufficient gravel, away from strong currents and pounding waves. Near a pair of large boulders, he sets to work rapidly sweeping with his tail and relocating debris by picking it up in his mouth and then spitting it into place. Within hours, he will dig a circular depression up to 6 inches deep and up to 2 feet in diameter.

A female approaches. Racing to meet her, he attempts to lead her back to his nest. He resorts to herding her with gentle nips and bumps. Above the nest, the female drops eggs while the male simultaneously releases milt to fertilize them. Finished, she heads to deeper water for recovery, while he remains to guard the eggs.

Largemouth bass have existed throughout the lakes of the panhandle for the last century. They prefer the vegetated, low velocity areas of sloughs and bays where there is slack water throughout the winter.

Marauders circle the nest – a hungry school of bluegill intent on a meal of bass eggs. The male largemouth charges, driving off two or three; a dozen others in the bluegill school dart in, snatching a quick bite of eggs.

Bluegills, a type of sunfish, tend to overpopulate their habitat because they have high hatch and survival rates. While Lake Pend Oreille sports very few bluegill, the fish prevails in other waters across the panhandle.

“Ideally, bass and bluegill balance themselves out, because bluegill can eat bass fry and eggs and keep the bass from getting too abundant. By the same token, bass can and do feed on bluegill,” said Fredericks. 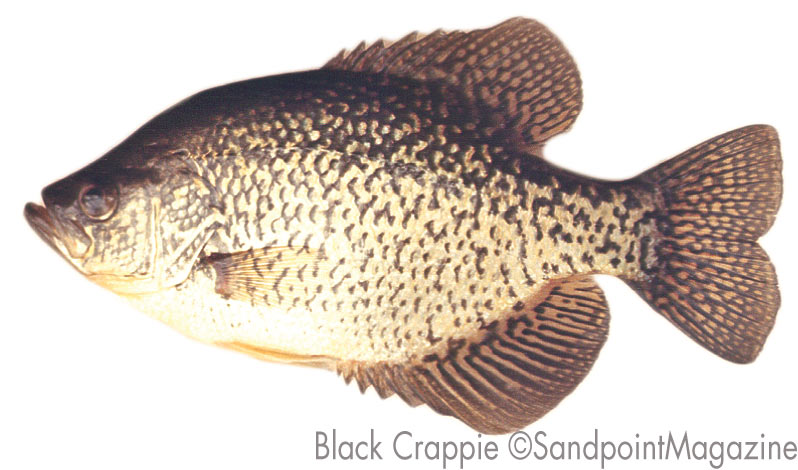 Another member of the sunfish family and a popular sport fish, black crappie, fills waters around Bonner and Boundary counties. The head and chest of a male black crappie grows darker in color with the onset of spawning. Males build colonies of saucer-shaped nests in muddy bottoms near vegetation. Speculation and probability suggest that females will drop eggs in more than one nest. A 10-inch female may produce in excess of 100,000 eggs. However, their spawning success can be sporadic and sometimes results in a “boom-or-bust” fishery.

Tucked away in the bottoms of most of our lakes and sloughs, the brown bullhead catfish lurks. While preferring water temperatures in excess of 50 degrees, they tolerate from 32 to 98 degrees. Neither high turbidity nor low oxygen bothers them, because they adapt to poor environments.

Parental fish, both male and female bullheads work to keep their eggs, up to 14,000 of them, oxygenated, fanning them with their tails and stirring them with their barbels. Males will suck the eggs into their mouths to clean them before spitting them back into the nest. Both parents guard the fry until they reach about an inch long.

Like other catfish, thousands of taste buds cover a bullhead’s skin, which means they can sample their food without putting it in their mouth. They benefit from a keenness of perception – an exquisite sense of touch, visual and hearing acuity, a sharp sense of smell, and the ability to sense electric fields generated by living organisms.

Presumably, smallmouth bass came downstream from Montana. They now abound in the POS. “They went from not being in our system at all to being ubiquitous throughout Pend Oreille Lake and the Pend Oreille River, and that happened in the 2000s,” Fredericks said.

Unlike largemouth bass, the more aggressive smallmouth likes cooler, faster water. They tend to occupy steeper shorelines and rockier areas, preferences that put the smallmouth in direct competition with the latest predator from Montana, the walleye.

Although still low in density within the POS, the walleye fishery is expanding.

“Smallmouth and walleye function fairly similarly,” said Fredericks. “If the walleye become more abundant, does that mean the smallmouth will become less abundant? The pie is only so big. What we do know is when the smallmouth really took off in the Pend Oreille River, we saw a lot fewer northern pikeminnow, because these two species overlap. So, while one of the numbers really increased, their counterpart all but disappeared. In a sense, you replace one that fills the niche with another. You may see that same type of thing happen to a degree with the walleye.”

Despite their differences, all these warmwater fish have this in common. Their existence in coldwater habitats causes them to grow slower and live longer, which eventually produces a quality fish.

While not discounting the impact of predation and competition of imported species upon natives, where their territories overlap, Fredericks said: “It’s probably fair to say that in the future, warmwater fish will have more of an impact on other warmwater species than on the coldwater species such as trout and kokanee. While there’s little doubt that many of the warmwater species will eat trout and kokanee when they have a chance, they occupy different habitats.”

For anglers craving a unique fishing experience, this is the best of both worlds.