Trains: ‘Around a pile of mountains’

The iron horse galloped into Sandpoint, and changed our history

In old movies, train whistles signify that a character is missing someone, thirsting for adventure or longing for home. For Sandpointians, train whistles have meant all these things and more, such as money, supplies and travel. Without the trains, there arguably might not even be a Sandpoint – at least not the city we know today.

When the Northern Pacific (NP) arrived in Bonner County in 1882, opportunities opened up. Trains hauled lumber to Eastern markets and brought back goods and supplies, and passenger travel boomed. Paul Croy’s grandfather arrived in Bonner County at about the same time as the NP. Croy, a lifelong Hope resident (now deceased), wrote a memoir of his grandfather’s early impressions: “Before the railroad, people were really isolated. … They had no way to transport anything that they raised at that time. It didn’t really open up until the railroads came through, and then towns cropped up all along the right-of-way. From there (Sandpoint) started blooming, because they could make all these industries and market their produce, sell their lumber, and one thing and another.”
The NP began laying track in 1881. The most challenging section, an 8,400-foot trestle spanning Lake Pend Oreille between Sandpoint and tiny Ventnor (now extinct), opened March 4, 1882. This first trestle, wooden and highly flammable, was replaced by a concrete and steel bridge in 1904. The railroad also built a 6,500-foot wooden trestle at the north end of the lake, from the Sunnyside peninsula to Trestle Creek, giving the latter its name. This trestle was later replaced by the present route.

Of course, these tracks and trestles were built not by an impersonal “railroad,” but by the hard labor of individuals – men from China, Italy, Scotland and Scandinavia – willing to do the backbreaking work of laying track. Chinese laborers lived apart from other workers, first in separate work camps and later in a settlement in Hope, isolated from their neighbors by racial and cultural barriers. By the 1920s most of the Chinese population had moved on. A small Chinese cemetery in Hope and artifacts at the Bonner County Historical Museum are all that remain of them. 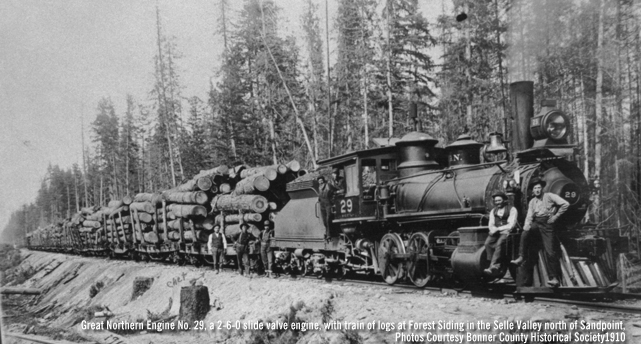 When the Great Northern (GN) came through Bonner County in 1892, it was known colloquially as the “Oriental Limited” or the “silk train” for carrying Asian silk from Western ports to Chicago. Construction of the GN attracted a sizeable Italian population who, unlike the Chinese, stayed on after the railroad was completed. An area of Priest River called the Italian Settlement, or simply “the Settlement” is marked by Settlement Road and Settlement School.

In a 1974 memoir, lifelong resident Katie Littlefield wrote: “Building of the Great Northern improved conditions materially for a time, as it gave employment to a great many and revived interest in the future of the town. L.D. Farmin came to Sandpoint as agent for the GN.”

Arriving in 1892, Ella Mae Farmin worked alongside her husband as agent and telegraph operator. “(T)here were perhaps a hundred people, twenty-three saloons and several houses of ill fame, two stores, two hotels, and one restaurant,” she later wrote. While her husband platted the town of Sandpoint, she named many of the streets and, perhaps inspired by the high saloon-to-resident ratio, started the town’s first Sunday school.

The Spokane International Railroad (SI), was built in 1905, providing a link between Spokane and British Columbia and also serving the locals. The late Ella Cantrell, born in 1908, once recalled, “The train would stop and wait for a farmer to finish milking so he could fill his cream can and ship it on the train.” The walking/biking trail that runs along the north side of U.S. Highway 2 west of Sandpoint was built on a former section of the SI grade.

Living far from a station didn’t stop rural passengers from hitching a ride. “Before the Long Bridge was built, people living south of the lake needed the train to get to town,” said train enthusiast Bob Camp. “They could flag down trains from a siding. The train would stop and the engineer would let them on. They’d ride into town and do their shopping and errands, then catch the train back to Sagle or Cocolalla.”

“I would not have any history in the area had it not been for my mother’s arrival to Sandpoint from Chicago Christmas night 1945 via train,” said Marianne Love, a retired Sandpoint High School English teacher and lifelong area resident. Virginia Tibbs rode with soldiers coming home from the war with her 15-year-old son Mike, and the family’s English setter. “In spite of the drizzly, cold winter night and the walk through what was still a wild downtown with lots of bars, she stayed here from that point on until her death last July.”

With the railroads came a boom in tourism. In 1919, the NP granted a request from Sandpoint business owners to run regular Sunday excursions from Spokane to Sandpoint in summer. “It will mean the assurance of Sandpoint becoming a summer resort of the very first rank,” gushed the Idaho News.
In spite of the optimism, occasional mishaps occurred, like a 1904 freight derailment at the northern edge of Lake Pend Oreille near Trestle Creek. Today the site is a popular diving spot, where divers can explore two boxcars settled in 112 feet of water.

A more serious derailment took place on July 7, 1985, when a broken rail joint caused a Chicago-bound Amtrak train to jump the track, injuring 81 of the 269 passengers and crew. “(T)hose involved in the Amtrak Empire Builder wreck 15 miles north of town Sunday said the community’s response to the unexpected disaster was so prompt, it appeared as though Sandpoint had to react to such disasters daily,” the Spokesman-Review reported.

As ambulances sped the injured to Bonner General Hospital, school buses ferried other passengers back to Sandpoint, where schools and churches offered shelter and food. One passenger, a Minnesota sheriff,  told the newspaper that he “wanted to hire a Bonner County officer to show his community how it’s done.”
Sandpoint even experienced a train robbery. The Express Gazette reported tersely, “On 8/25/1902, a Northern Pacific train near Sandpoint was held up by seven men. Express car uncoupled, but efforts to dynamite car unsuccessful.” Three men were soon arrested in Spokane, fingered by an eyewitness. By some accounts, a fourth suspect, Herman Lamm, was rumored to run with the Butch Cassidy gang. Lamm’s expert techniques at “casing the joint” before a robbery were passed among the prison population and eventually emulated by a young bank robber named John Dillinger.

Dillinger brings to mind Prohibition, when crews were routinely intimidated by bootleggers wanting to ship whiskey from Canada via the trains. “A (Spokane International) car inspector was ‘stuck up’ by a whiskey runner and told at the point of a revolver to ‘leave that car alone,’ ” reported the Pend Oreille Review in 1920. “The man told the inspector he had lost two cars of booze and if he lost any more ‘somebody would get his.’ The car inspector reported the matter at the station at Eastport and Deputy Collector Young took possession of the car when it reached the American side of the line. Twenty-three cases of whiskey were taken from the car. … (T)rainmen were threatened with dire vengeance if more whiskey shipments were tipped off to the customs officers.” This Canadian liquor was then sold to rural roadhouses and urban speakeasies. In Spokane, several speakeasies were clustered conveniently near the Great Northern depot.

Sandpoint’s own depot, built in 1916, is the oldest remaining passenger depot along the old Northern Pacific line. (See story on depot, page 84.)
The train whistle of yore is now a blast heard for miles. Local passenger travel faded out in the 1960s. Only two, long-haul Amtrak passenger trains serve Sandpoint now: one headed east to Chicago and the other west to Seattle or Portland. Freight hauling remains key, even as environmental and safety concerns over coal trains and oil tankers are debated.

But one thing hasn’t changed. The rails remain Sandpoint’s arteries, pulsing with life and linking us to the rest of the continent with bands of steel.