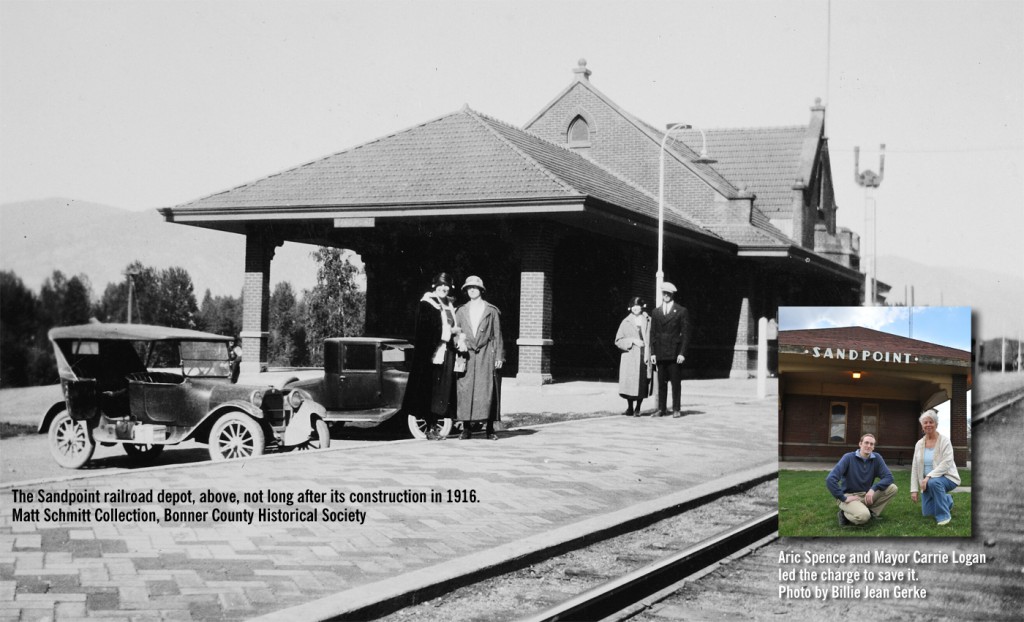 Aric Spence, a longtime Sandpoint resident, is concerned his town is losing its history. So when he heard five years ago that the town might lose its historic rail depot, he became alarmed.
The depot is the last surviving building of the original townsite east of Sand Creek – and one of the oldest buildings in town. It is on the National Register of Historic Places.
Built in 1916, for its first several decades the depot was a metaphorical front door for visitors and new residents, designed to make the city proud. Constructed of brick in a neo-Gothic style, it has terrazzo floors, white tile wainscoting and benches of polished wood. The roof, with overhangs that once curved gracefully outward, was covered with colored tiles.
As train traffic gave way to cars and airplanes in the 1960s, the depot saw declining use and with it, less maintenance. The gable ends were removed when the gutters rotted and fell off, and then bricks, mirrors and brass fixtures wandered off with vandals. When tiles fell from the waiting room ceiling in 2009, the building was closed, and Amtrak passengers were left to shiver on the platform outside.
Then the Sand Creek Bypass was built just west of the depot.
“Amtrak claimed their access to the depot was compromised, so they asked ITD (Idaho Transportation Department) to provide mitigation funds,” said Spence, 43. Given the deteriorating condition of the building and its position marooned between the bypass and the tracks, Amtrak planned to abandon the depot and use the money to construct a new stop outside downtown.
That’s when Spence got to work. A website designer by profession, he launched sandpointtrainstation.com to showcase the depot and enlisted the help of the city’s Historic Preservation Commission and then-city councilwoman (now mayor) Carrie Logan, in a protracted but ultimately successful effort to save the depot. After receiving assurances that access would remain adequate once the bypass was completed, Amtrak agreed to keep its station stop in place and use the $922,000 in mitigation funds to repair the depot.
Even with that kind of money, it’s not possible to restore the depot to its original condition.
“Amtrak’s intent, and ours, is to make it look as much like it did when it was first constructed,” said Logan.
The roof will be replaced, and the distinctive gables, parapets and brickwork will be renewed and repointed to replace the mortar lost through a century of weathering. The invisible but essential bones of the building will be rebuilt and modernized. A new HVAC system will be installed, plumbing replaced and electrical system updated.
Best of all, passengers will once again be able to use the depot. “The reason why the depot’s so special is it’s still in use,” said Spence. Once renovations are complete, it will be among the few original Northern Pacific depots still sheltering waiting train travelers.
Although funding won’t allow renovation of the entire interior, a new main entrance and small waiting room will be created at the south end under the portico. There, the windows, interior walls, terrazzo flooring and tile wainscoting will be refurbished to help modern passengers experience the style and substance of the original building.
Work is to begin this summer. By the year’s end, this piece of our history, at least, should be secure, ready to shelter passengers into its second century.