A peaceful excursion saves Hey Jude for another season

A peaceful excursion saves Hey Jude for another season

There comes a time, sadly, in the life of many an aging sailor, when he, or the first mate, thinks, or talks, maybe aloud, maybe with sighs, about trading down to a power boat.

At age 70-plus, things start to happen. Your knees hurt when you have to scramble up onto the deck to unsnarl the boom vang. A wind gust hits the stern and things happen too quickly.  Walking along the gunnels to set out fenders, you have to steady yourself on the lifelines and shrouds. Erratic evening winds at the mouth of the bay aren’t as much fun as they are a challenge and frustration.

But just when you think you’re done with sailing, ready to give it up, a special day happens – and you’re in it for another season. This is the story of one of those magical times.

It was an overnighter actually. The two of us and our sloop Hey Jude, mid-September, on Lake Pend Oreille. We squeezed the trip into the middle of an already busy week, at the end of that long, hot, miserably smoky summer of 2015.

“If we don’t go now, we’ll have written off the whole season,” argued the captain. “Just over to Jim Lippi’s place at Beyond Hope, Ivano’s del Lago.”

“OK,” said the first mate, “Treat me to dinner there and you’ve got a deal.”

All we had to pack up and stow were warm clothes, bedding for the V-berth, one breakfast, two lunches, beer, wine and treats. Easy.

A front passed through the night before. Still no rain, but enough of a breeze to finally clear the wildfire smoke that had choked the lake, and us, for weeks. As we left Sourdough Point, the air and the lake were shimmering, prism clear. The NOAA weather synopsis on VHF channel 3 was zero percent chance of precipitation, air temperature in the mid to high 70s, light winds to 5 knots. 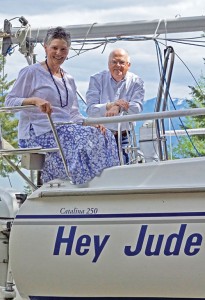 Around Contest Point, as the first mate noted landmarks on Chart No. 18554, we picked up a consistent light breeze, a little 5 degree lean, and glided along at 3 knots. A gauzy scrim over Scotchman Peak, Sunnyside in sharp contrast, green trees in the newly bright sun. Past Sandpoint and the marina. We shared happy memories of Trinity at City Beach and the lakeshore trail.  Bald Mountain. Schweitzer, and the stark outline of bare ski runs. Said a little prayer for snow to end the drought and bring us a good ski season. The granite face of Roman Nose. Oden Bay, past Kootenai Point, watched the depth finder to keep her keel clear. Shook our heads at the ironic contrast of castles, McMansions, cabins, campers and, out there at the tip of Hawkins Point by the Pack River Delta, a lone white tepee.

About 3 p.m. we were becalmed.  The only sound was the metallic clank of the mainsheet shackle as the sail luffed. That silence, and a flock of coots, created the next chapter in the magic of this trip. The lake was an antique mirror, undulations in liquid mercury, patterns of brown and flashing silver. Fish rose to send ripples out for miles. In that setting, we glided, barely moving, through a 2-acre crescent of coots. We shared the moment with small gestures and whispered phrases, like believers entering a cathedral. Little white rooster tails of spray as the coots lifted off a foot or two, right next to the hull, then settled down again. Big feet comically dangling on skinny legs as they ran across the surface. They chirped, had a conversation, just a bit uneasy and confused by our silent presence among them. Their feathers glistened gray and black, amber eyes, white beaks with that little spot of red, closer than we had ever imagined. We were part of it.

A half hour later, out of the shadow of Anderson Point, the wind came at us, up the length of the lake from Bayview. I went below to secure the cabin and brought up beers. Sails full, 10 degree lean, 5 to 6 knots, almost hull speed. In the groove, a light hand on the wheel. Tell-tales on the jib flying perfectly horizontal. The mainsail cupped, traveler adjusted. A sailor’s sweet spot. We cruised on a single tack south toward Hope. A shared clink of Coronas.

At Warren Island the wind died again. We furled the jib. Centered the traveler. Pleated the mainsail onto the boom, four blue canvas ties, one at each batten. Our well-practiced routine. We motored to Owen Bay, on the south side of Hope Point. The water was inky there, charcoal gray and smooth, little ripples like a velvet comforter shaken out and settling down. American flags, limp on their poles. Two canary yellow kayaks, brilliant in slanted afternoon sun, leaned up against a weathered gray boat house. Beach towels, bright and patterned, hung over deck rails.

We tied her up at the docks of the resort, walked in to make our reservations, and limbered up with a walk through Sam Owen Park. Then we settled in for a sunset dinner on the patio. Laughing Dog pilsner in a frozen glass. Green salad with peperoncini ribbons and Ivano’s creamy garlic dressing. Panko crusted calamari steak, butterflied, a creamy white center, all on a bed of perfect angel hair with a buttery lemon Beurre blanc sauce, the last drops sopped up with crusty sourdough. Shared dessert, a warm berry cobbler. We listened to and enjoyed the camaraderie of friends, all of us grateful to be in such a beautiful place.

By the time we returned to Hey Jude, there was evening dew on the cockpit cushions. Nestled into fleece jackets and a shared WSU Cougars blanket, we were rewarded with stars in a clear night sky. Pend d’Oreille Winery’s Bistro Rouge in plastic goblets, chunks of dark chocolate with hazelnuts. Tony Bennett duets, then Dave Brubeck’s Take Five fading away. A time for reflection on the bullets we have dodged and those that have grazed but not mortally wounded us. At this age, existential musings are not idle philosophy. The cockpit of a sailboat, at night, draws out those too rare and real conversations, and works marriage magic.

We toasted ourselves, and Hey Jude, and made a pact. We’d get her out of storage early next spring. Maybe even before the lake is up to full 2,062-foot pool. We’ll have more overnighters. We’ll barbecue and take her out with friends for moonlight sails. We’ll go to Bottle Bay Marina for salmon tacos. We, of course, made a list of boat projects.

We went below, snuggled into flannel sheets, unzipped our sleeping bag. Hey Jude’s gentle rocking, fenders squeaking against the dock, was the perfect lullaby.

That overnighter, with the beauty of Lake Pend Oreille, the cathedral moment with the coots, a fabulous sunset meal at Ivano’s, red wine, dark chocolate, and couples conversation, saved Hey Jude. It kept us sailing another season.

And a final note to the captains out there. Only one small part of the experience had to do with sail trim and boat speed.