Bring a cooler ... and SKIP the dam, for the fishes' sake

After the winter snows have melted off the mountains, and the days become drenched in sunshine, mountain streams settle into their slower summer pace. 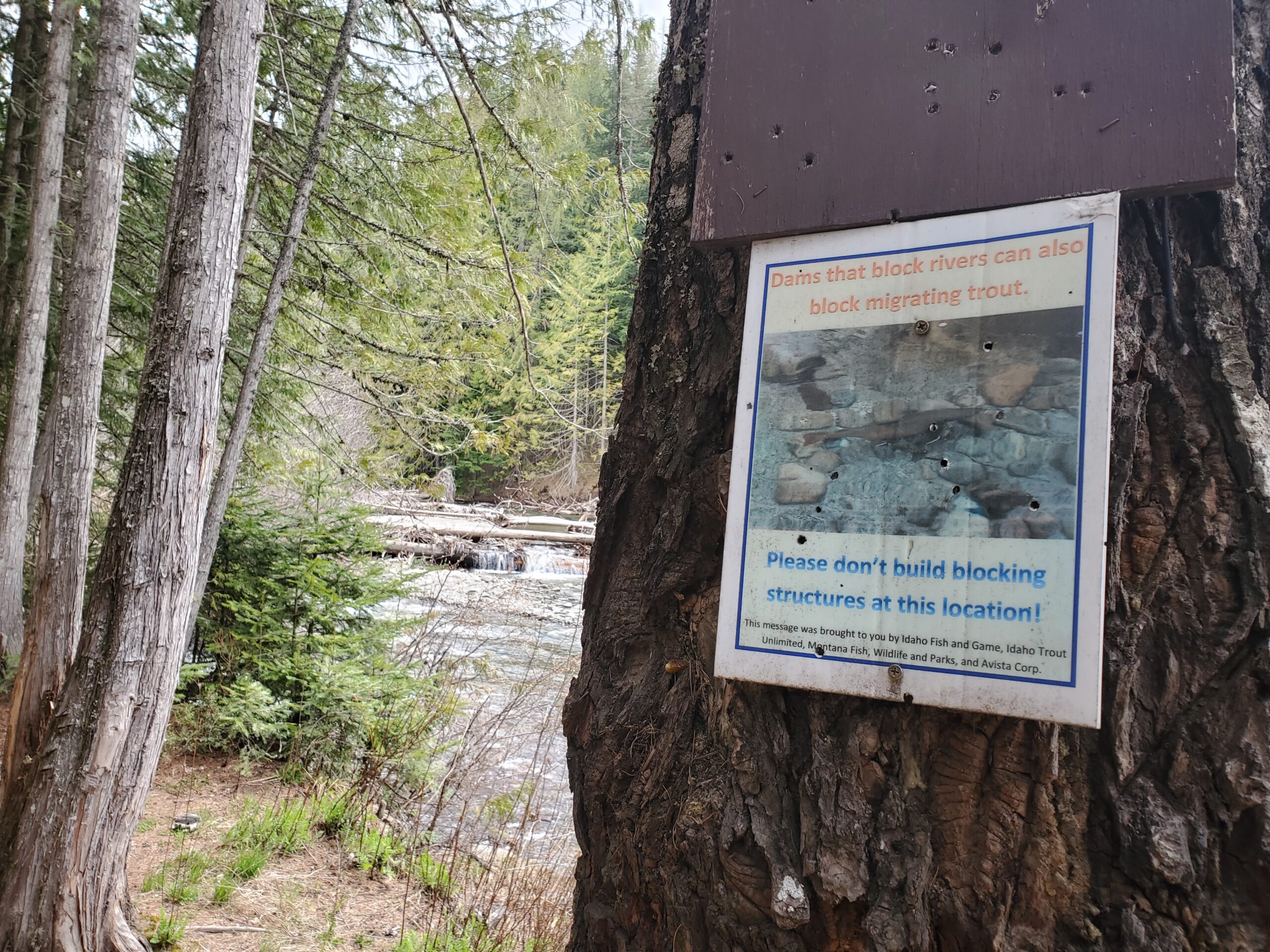 The heat draws picnickers and campers to the hills, where they cool their feet and beer in the creeks, while the kids play in the woods or in the shallow waters.

Sometimes these visitors forget that they share these waters with a myriad of other creatures, among them the mighty bull trout.

With its understated salmon-colored spots, the bull trout isn’t as colorful as its flashier cousins, westslope cutthroat and rainbow trout, prized in fly fishing circles. Yet, bull trout also are exciting to catch, mainly because they’re relatively rare—and they can grow large.

It’s not legal to harvest (a gentle word for kill) bull trout in Idaho, because this native trout is listed as threatened under the Endangered Species Act. The streams and lakes of the Panhandle are considered critical habitat for the fish.

But sometimes the harm that comes to bull trout isn’t through poaching or accidental harvest, but through the innocent actions of families just trying to cool down and relax.

A popular pastime in some streams is to build rock dams to create pools for wading or for parking a lawn chair with some creek-cooled beverages. This beaver-like behavior is not good for bull trout, however.

Tom Whalen, a retired Idaho Fish and Game officer, used to spend a fair amount of time dismantling the low, cobble and rock dams while patrolling the tributaries of Lake Pend Oreille.

“I’ve torn out dams on nearly every tributary of this lake,” Whalen said. Typically, he finds them near dispersed camp sites or popular hang-out spots. One perennial problem spot is Grouse Creek Falls.

Whalen once waded into Grouse Creek below the falls to tear apart a recreational rock dam and found an adult bull trout crushed beneath one of the rocks that dislodged from the loosely built structure.

“You could tell it was trying to get upstream, but part of her body was downstream,” Whalen recalled. It was a sight rarer than a live bull trout, yet it illustrates the problem these barriers present to native fish.

Each fall, mature bull trout spawn in the upper reaches of cool mountain streams. They swim up their natal stream, sometimes in midsummer, guided by a homing instinct. When it’s time, with a few sweeps of their tail, they tuck their eggs into nests of gravel (redds), which hatch in the early spring.

After two or three years in their natal stream, the young bullies make their way downstream to feed and grow in lakes or rivers. They’ll spend the next three or four years putting on a few pounds (in January 2021, a 39-inch, 31-pound bull trout was caught in Lake Pend Oreille), then make their way back to their birthplace to repeat the cycle.

Barriers, like man-made rock dams, can keep them from reaching their spawning habitat.

“The fish will still try to get through because their drive is so strong, and those rocks are still loose, they haven’t had time to naturally settle,” Whalen said, explaining how the fish can be crushed.

The dams typically wash away in spring runoff, and so they don’t usually stop the spring spawners, like the westslope cutthroat trout. But bull trout spawn in the fall, after the annual recreational dam construction season. 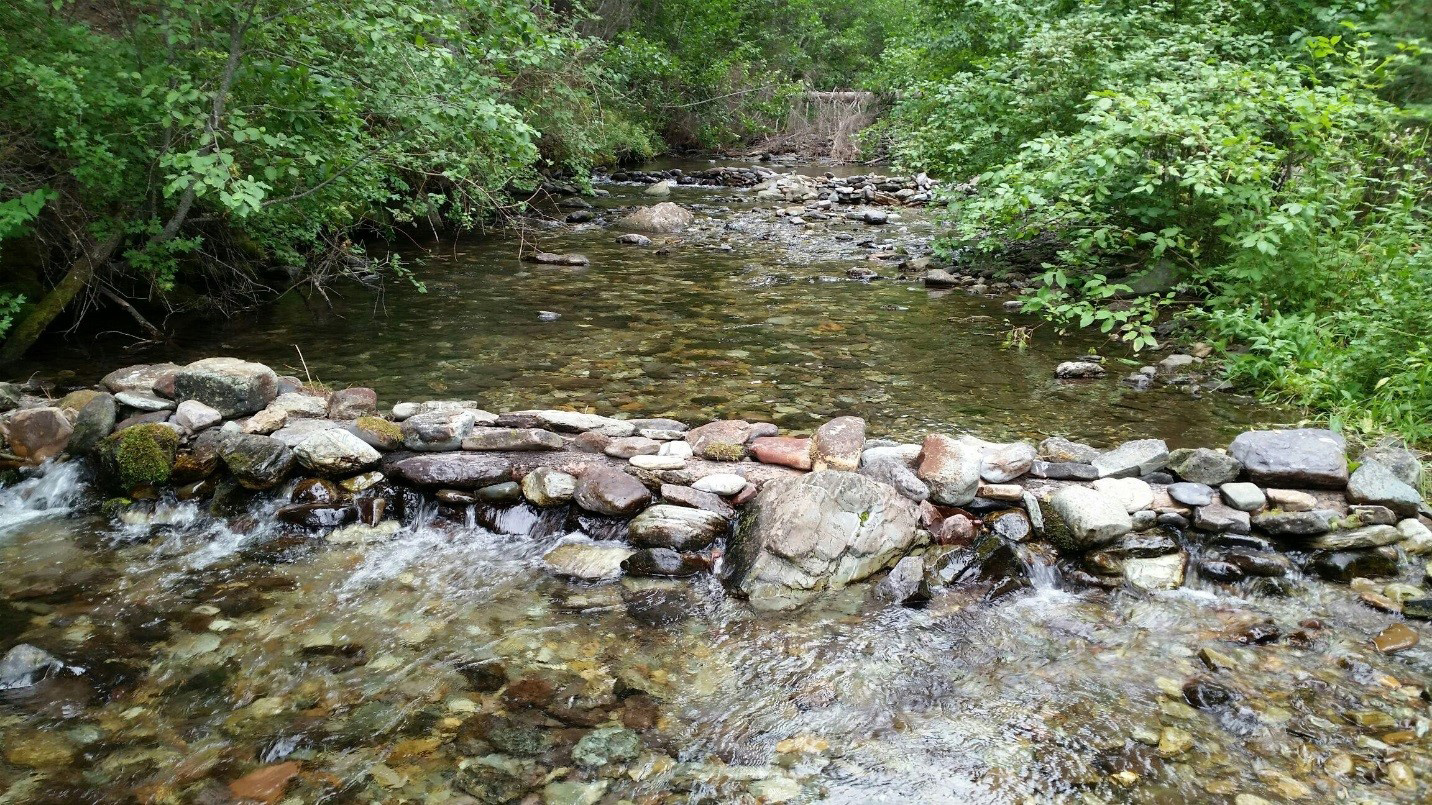 Dams created by recreationists impede the spawn of endangered bull trout as well as other fish. (photo by Montana Fish, Wildlife and Parks)

The problem is, it’s too shallow below the rock dams.

“There are deeper pools throughout the falls,” Stash said of Grouse Creek Falls. “When you have deeper pools, fish can jump obstacles fairly well. They get a running start … It’s amazing what adult fish can make it up.”

Fishing for bull trout in the Panhandle, like westslope cutthroat trout, is by catch and release only. Idaho Fish and Game is trying to build back a robust bull trout population so they can be harvested along with other trout species. But that requires ample quality spawning habitat and a way for bull trout to reach that habitat in the fall.

Still, the Idaho Panhandle is considered a stronghold for bull trout, while across the border in Montana, the population is struggling. There, fisheries managers don’t allow fishing for bull trout even under catch and release rules.

Most people value native fish; they just might need more knowledge of fish needs, according to Dustin Masin, who took Whalen’s place as Idaho Fish and Game’s Bull Trout Officer.

“It’s important for people to recognize that fish use these streams as highways,” Masin said. “Rock dams are something in the way that’s going to kill a few of them.” 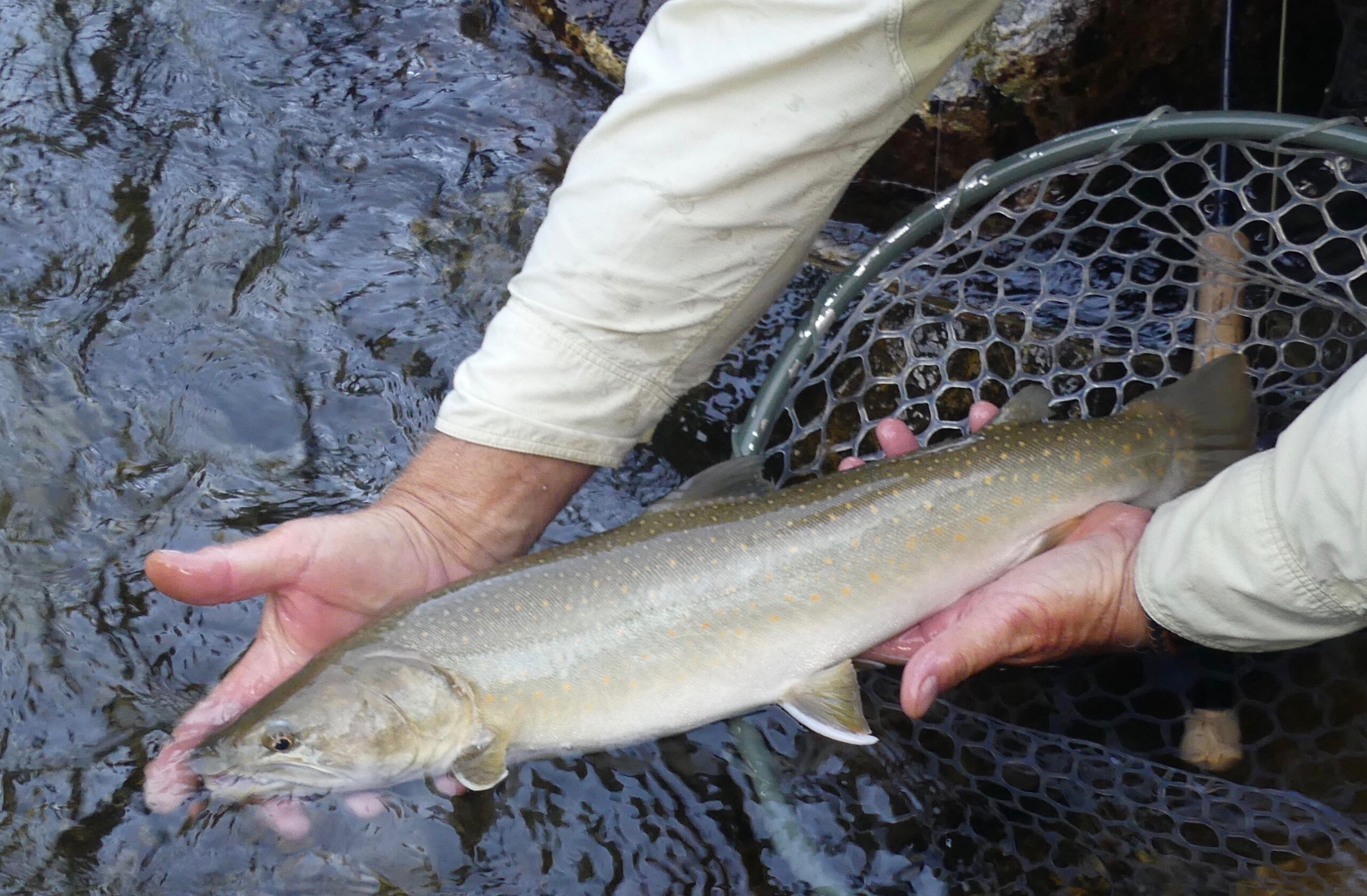 Bull Trout are the endangered species most at risk from rock dams. (photo by Montana Fish, Wildlife and Parks)

In addition to learning to properly identify bull trout—to avoid accidentally catching one for keeps—the public can also help their recovery by practicing the Leave No Trace ethic when camping and visiting the woods: i.e. take only pictures, leave only footprints.

In this case, don’t alter the waterways and leave no sign of your visit to the bull trout’s home.

And if you’re lucky, you might one day get the rare pleasure of spying—and perhaps catching— one of these plucky bulls in a high mountain stream.