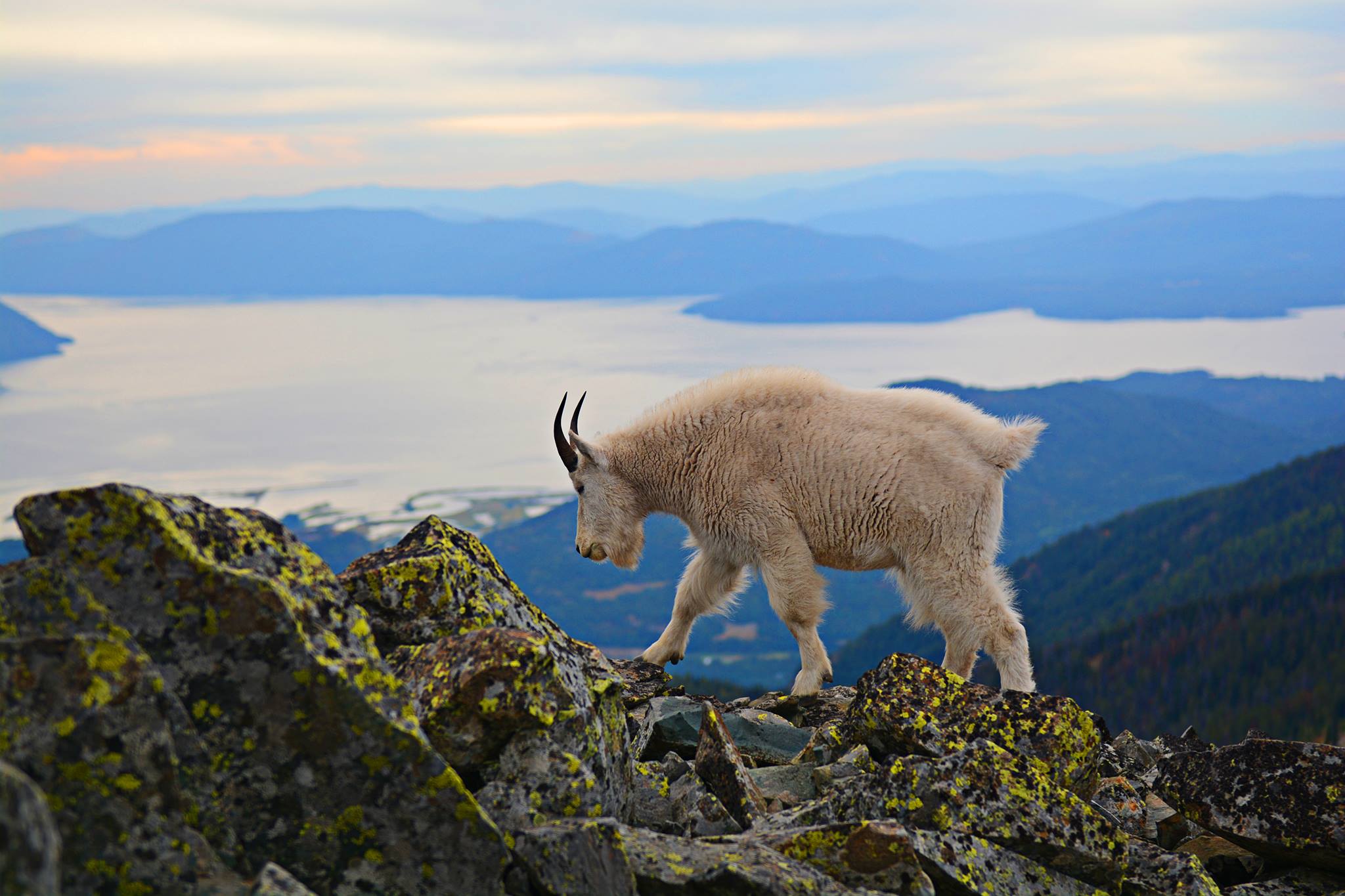 A drive into the woods outside of Clark Fork followed by a four-mile hike up to the highest point in Bonner County—Scotchman Peak— is enough to make anyone feel as though they’ve ventured into the unknown. Another reminder that hikers are far from home? The majestic and mysterious creatures who live there: mountain goats.

These white, horned creatures embody the toughness, skills, and fortitude it takes to live in the most barren, rocky places that mountains have to offer; places that predators avoid, and which rarely see human activity. In the case of Scotchman Peak, that human activity is elevated.

Those goats have become the impetus for a robust education campaign, spearheaded by the Friends of Scotchman Peaks Wilderness. The nonprofit established its Goat Ambassador Program in 2016 after a human-goat interaction in 2015 ended with a severe bite and a temporary closure of the trail. Encounters with aggressive goats had become more frequent, so it was decided: hikers and goats needed a break.

The trail closure and push for further education points to a broader issue, which is the role that space and respect play in the lives of mountain goats. Luckily, with the application of some simple etiquette, people and goats alike can enjoy the unmatched views of Lake Pend Oreille from Scotchman Peak. 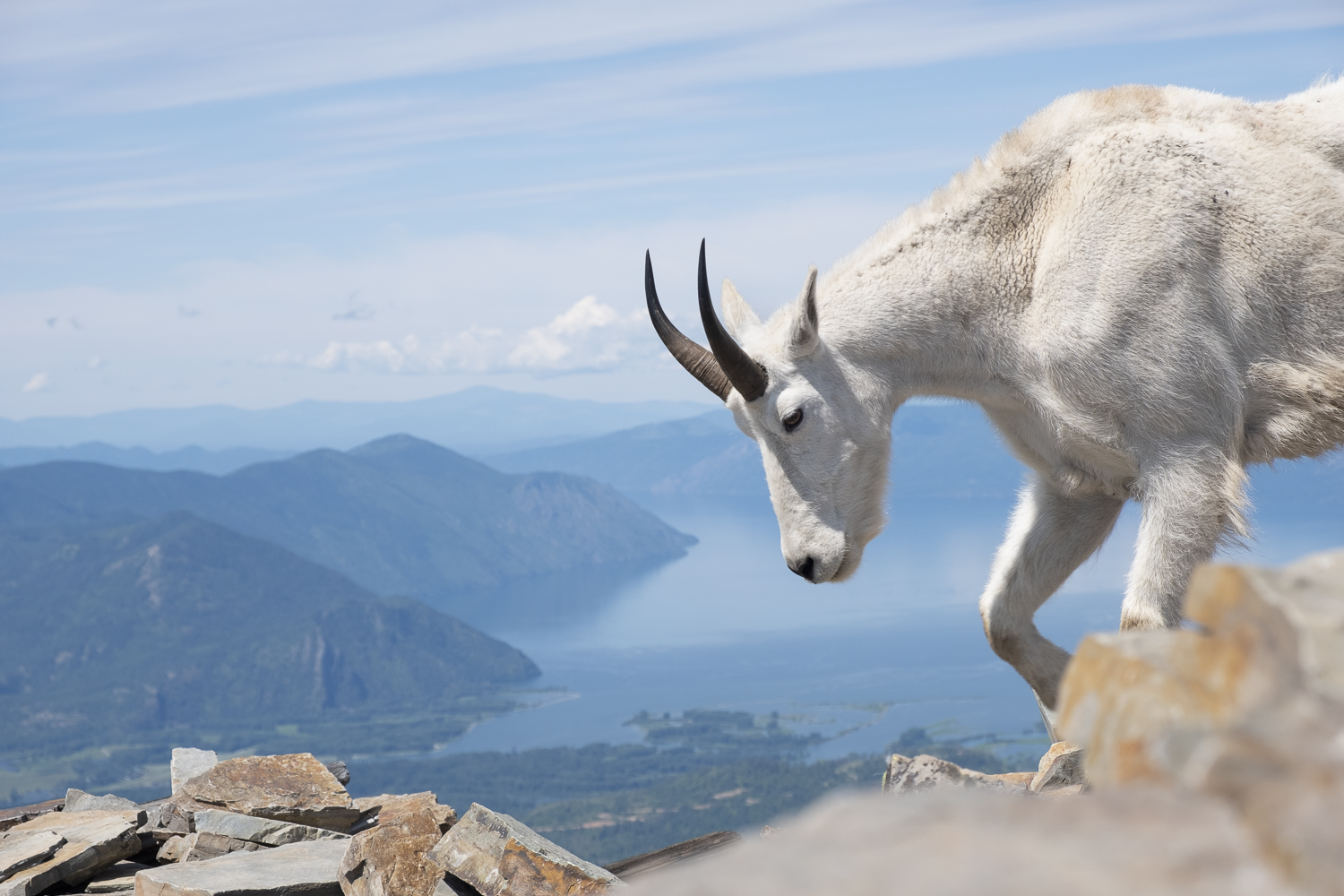 THE MAKINGS OF A MOUNTAIN GOAT

The Scotchman Peak mountain goats are part of what the Idaho Department of Fish and Game calls the Cabinet Population Management Unit—the herd living between Lightning Creek and the Montana border. Most of the herd, estimated at about 50 to 80 goats, resides in Montana. Last summer, hikers counted 16 goats at Scotchman Peak.

Laura Wolf, a regional wildlife biologist who served as team leader on IDFG’s 2019-2024 Idaho Mountain Goat Management Plan, said she’s been fascinated with the cliff-dwelling beasts since she participated in the 2007 translocation of 23 goats from Utah to the Lemhi Mountains near Salmon, Idaho.

Mountain goats can be easily spotted on Scotchman, thanks to their stark white coats. They have wide, cloven hooves—ideal for negotiating rocky ledges—and both males and females have seriously sharp horns.

“Nothing has quite the, basically, swords on their heads that the goat does,” Wolf said.

Unlike other horned ungulates, mountain goats aren’t known to use theirs often. They may come into play, however, if a subordinate goat is encroaching on a more dominant goat’s space.

“If another goat is in that spot, then they will do something, but usually it’s a toss of the horns,” Wolf said, adding that these interactions rarely result in violence. “But if it does, they have super tough … armor on their rear ends that protects them from horn jabs, which we don’t have.”

Humans’ general lack of body armor is just one reason to leave mountain goats alone. Especially at Scotchman Peak, it’s important to know that the goats aren’t afraid to get friendly.

“They love salt—that’s one reason why you have this human habituation issue. People do also feed them, but I think it’s the draw for salty people and salty urine that’s left on trails,” Wolf said, adding: “It’s basically like their candy bar.”

The FSPW Goat Ambassador Program depends on volunteers to staff the Scotchman Peak trail on weekends and holidays throughout the busy season. Ambassadors are tasked with educating hikers about proper etiquette while visiting mountain goat country. The program’s mission is to lower the likelihood of negative human-goat interactions.

“Most people don’t seem to realize that these goats are not at all like the cute little goats you see at farms or in people’s yards … They’re very large, wild animals and need to be recognized as such,” said Goat Ambassador Wendy Lawrence.

Wolf said that the number one rule in avoiding habituation is to never feed mountain goats, or any wild animals. Second, make an effort to keep space between yourself and the goats. Hikers have been known to allow goats to lick the sweat from their skin, which is dangerous for all involved.

“A goat may decide to come over to you and now it is too close to you, in your bubble,” Wolf said. “That may mean moving away … or it may mean throwing rocks at it, clanging your hiking poles—that sort of thing, to try to deter it from getting closer.”

Some goats—billies, in particular—may need more encouragement, Wolf said. Don’t be afraid to toss rocks in their direction—Wolf said the goat’s thick hide will keep it from being hurt.

“It goes for anything that’s becoming habituated—doing things that will help it realize that it shouldn’t want to hang around people,” she said. “That doesn’t mean severely injuring them, but it can mean doing something that is a little bit scary or a little bit uncomfortable to encourage them to move on.”

As for appropriate distancing when goats are present, Wolf suggests the “rule of thumb”—hold up your thumb and close one eye.

“If you do that … and you can still see the goat on either side of your thumb, then the goat is too close,” she said, “and on Scotchman, they’re usually too close.”

Goat Ambassador Mark Cochran said he was once speaking with a youth group near the peak when three goats appeared nearby.

“One young gent, probably about 10 years old, was a bit frightened by the goats, yet fascinated,” Cochran remembers. “He told me he was ‘lovingly terrified’ of the nearest goat, a big ol’ billy.”

Photo by Nicole Phillips. Please do as these photographers did and use the zoom feature on your camera, or a special lens. Keep your distance, and don’t allow the goats to approach.

Beyond the adverse effects of human-goat intermingling on the animals’ well-being, climate change is likely going to have an impact on their preferred habitat. It might already have, according to Wolf.

“We have seen declines in a lot of native herds across the West in the last couple decades,” she said.

Hotter summers mean less abundant foraging opportunities in the bare rocks atop Scotchman. Mild winters and less snow should increase over-winter survival, but possibly not enough to make up for the severely dry conditions predicted during the warm season.

“They really are tied into these cliffs,” Wolf said. “They’re vulnerable to predation if they’re wandering through the forest.”

Decreased resource availability combined with habituation could be a detrimental combination for the goats of Scotchman. Mountain goats may be tough, but being mindful while visiting their turf is vital to their survival.

Ideally, hikers would experience the goats as Lawrence once did on a quiet day, summiting Scotchman with her husband.

“There were very few people, and the goats didn’t seem stressed or nervous having us up there,” she recalled. “There were a few mama goats and babies and everyone just kind of hung out together for a while. It was really lovely.” 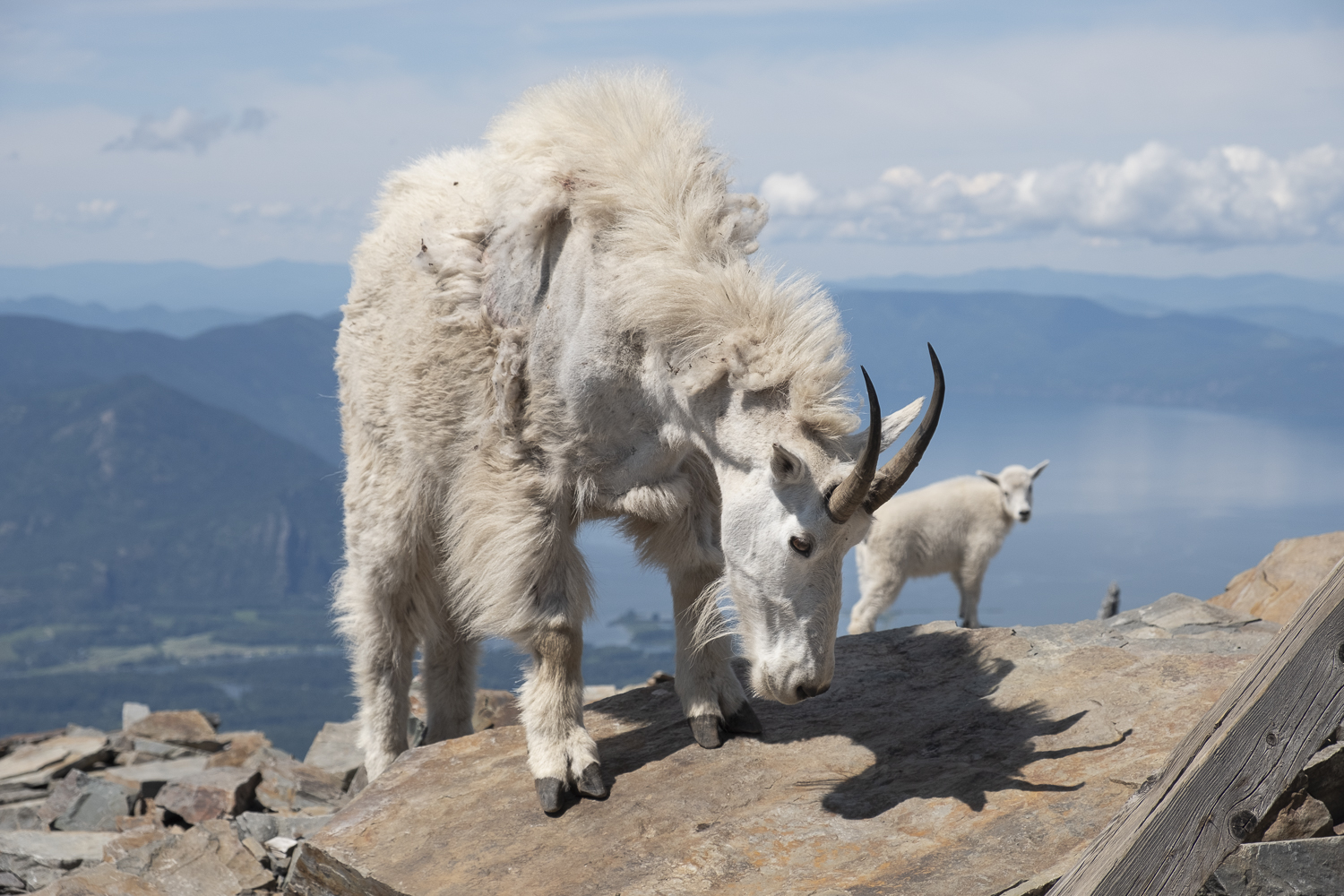