Summiting Scotchman Peak is—or should be—a must-do for anyone who lives in or visits here. At 7,009 feet, it is the highest point in the county. Shaggy goats, huckleberries, and stellar vistas aside, it’s also the namesake for an 88,000-acre roadless area that has long captured the imagination, as well as politics, of communities locally all the way to the capital cities of Boise and Washington, D.C. 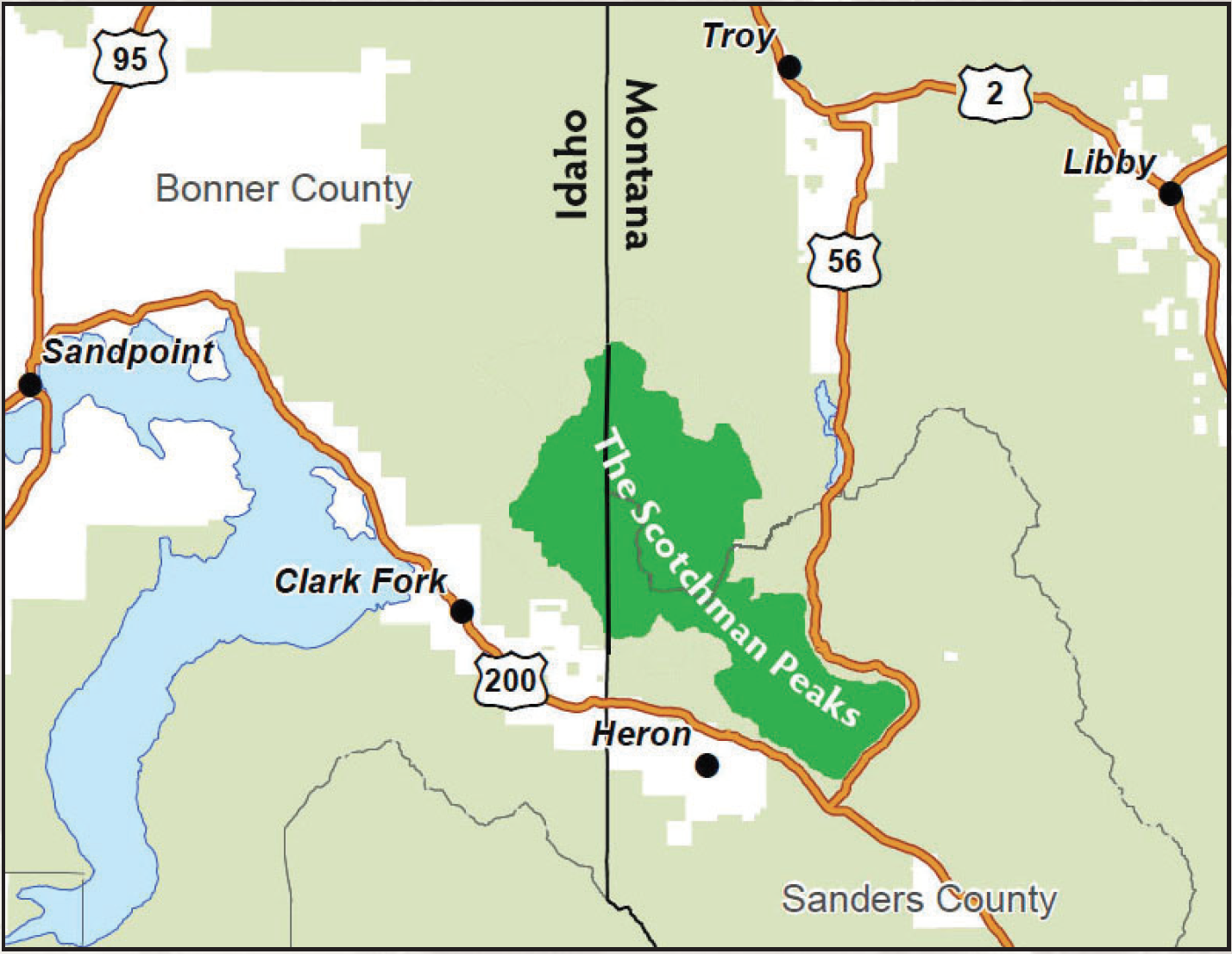 Managed by the U.S. Forest Service as a “recommended wilderness” since 1987, the Scotchmans—as they are colloquially known—are as much an idea as they are a geographical reality.

Since January 2005, the Friends of Scotchman Peaks Wilderness has advocated for officially designating the rugged area on the Idaho-Montana border as a wilderness. The effort has yet to reach its goal, though the proposal was the subject of an advisory vote in 2018, which U.S. Sen. Jim Risch, R-Idaho, vowed he would follow in deciding whether to support wilderness designation in Congress.

FSPW Executive Director Phil Hough recognized that while the vote resulted in a majority opposing wilderness designation, “I would suggest that it was not an accurate assessment of where our county was on the issue.”

That said, Hough added that the 2018 vote provided an important lesson: “What we learned is that a single-issue land use bill isn’t likely to get enough support in Congress. … When approaching land use, it’s important to look at the big picture.”

Among the biggest parts of that big picture for FSPW is building local support for wilderness that then translates into political necessity among members of Congress.

“To satisfy the delegation means you have to have local support. That’s why the role of a citizens group is so important to getting a bill forward,” Hough said.

Organizations that represent outdoors user groups are essential to those efforts—even, and maybe especially, if their constituencies stand to gain little direct benefit.

Jason Welker serves as executive director of the Pend Oreille Pedalers, which promotes area mountain biking and performs a wide range of services including educational programs and vital trail maintenance. He said his organization supports wilderness designation for the Scotchmans while also understanding that its status—not to mention its dramatic terrain—makes it off-limits to cyclists.

“Bikers are interested in maintaining access to those areas, but also protecting them from mining and logging and those kinds of activities—mountain bikers aren’t just mountain bikers, they’re hikers, too,” he said. “The last thing we’d like to see is more roads go in there.

“I love wild places,” Welker added, “and I love the idea of having that corner protected forever—even if it means no biking in there.”

Sandra Mitchell, who serves as the public lands director of the Idaho State Snowmobile Association, echoed Hough’s conclusion that “the days of the stand-alone wilderness bills are long gone,” and the critical component to getting federal action is to address a wide swath of communities’ and groups’ needs.

As a roadless, non-motorized area, the Scotchmans both now and in a potential future as a federal wilderness would be closed to snowmobilers—yet, “I do want them to be protected,” Mitchell said. “I would like to see the community better off, the users better off, with action taken by Congress.”

Now may be a better time than most in the long history of the Scotchmans wilderness effort, in large part because more people have taken to the great outdoors amid the ongoing COVID-19 pandemic.

“What we saw last year was an increase of about twofold over 2019,” Hough said, adding that FSPW trail ambassadors interacted with a daily average of between 100 and 140 individuals on the Scotchman Peak trail in 2020.

“And a lot of the people were from out of the area,” he said.

Hough doesn’t see that changing, as more people have rediscovered “what a great release it is to be out of doors, hiking.We’re not going to go back to pre-2020 levels in terms of usage.”

Whether that interest and use can be leveraged into federal action remains to be seen—but bringing all those pieces together is the task before Hough and FSPW.

“Wilderness work is and always has been bipartisan,” he said, noting that the 1964 Wilderness Act passed 374-1 in Congress. “It was built upon collaboration and compromise.”

Indeed, collaboration and compromise are as much in the spirit of the Scotchmans as its iconic place in the landscape of the Inland Northwest.