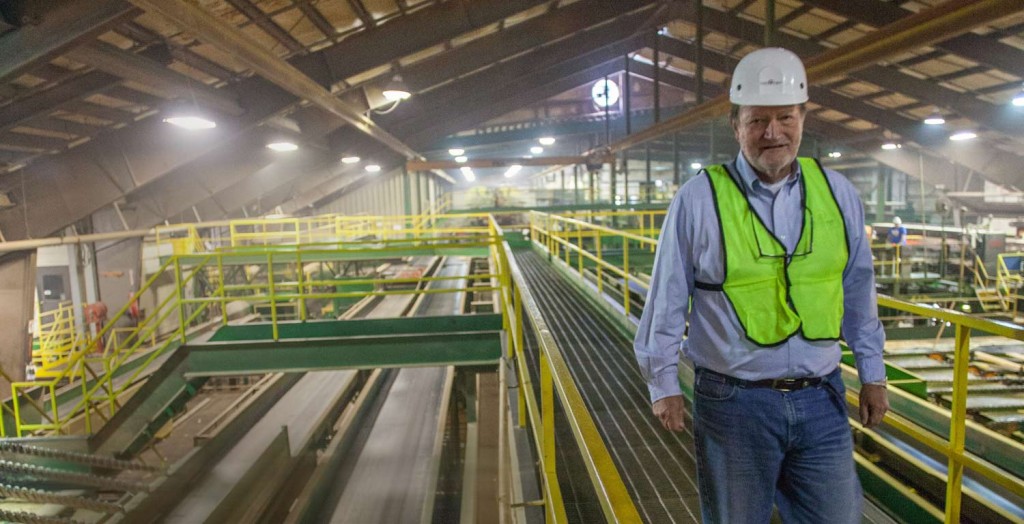 Today’s mills are high-tech wonders, plus the industry and a history book

they’re not  your father’s sawmills

In another century, my dad and I worked swing shift one winter on opposite ends of a sawmill. I pushed raw logs out of the dark waters of the millpond and into the mill. He pulled “green” boards into orderly piles on the stacker. Between him and me was a clanging, banging, rattling, whining, unheated, crowded, dangerous construction of sheet metal, electric motors, drive belts, chain conveyors, whirling saws, hydraulic rams, galvanized roofing, I-beams, concrete and wood that would never pass safety inspection today. The Occupational Safety and Health Act (OSHA) was a new idea and “enviros” were getting traction in the woods. Sawmilling traditions of the first three-quarters of the century were fraying around the edges.

The plant we worked in was specialized and newfangled. Boards that proceeded to the stacker were 2 inches thick by 4 inches wide by 8 feet, 3 inches long. Finished stacks were hauled via forklift to the dry kiln and ultimately to the planer, where each board was smoothed and trimmed to 1.5 inches by 3.5 inches by 8 feet, standard framing lumber of the day.

Stuffed between my dad and me was an assortment of machines – cutoff saw, debarker, head-rig, slab edger, double resaw, gang saw, single resaw, trim saws – connected to each other by open conveyors moving ever-reducing-sized pieces of wood – very quickly – toward the stacker. On the periphery was a new device called a “chipper” and a huge tepee burner, receiving as much as 30 percent of what went into the mill.

Two of us worked the millpond. One sorted logs – dumped en masse into the pond by a Cat loader – into an orderly row and pulled them toward the other, who used a pike pole to lever logs onto a conveyor chain that dragged them to the cutoff saw. We took turns. The first was hard, somewhat hazardous work – I managed to fall into the pond my first night – and the second was boring and uncomfortable. The burner stood like a lighthouse 150 feet off the starboard beam of a man pushing logs into the mill. In winter, one corner cooked while the other froze over. I did not stay on the millpond long enough to find out what summer might be like.

Four decades later
Today, no burners spew sparks into the night. The Environmental Protection Act closed the door on that, but it was as much about economics as it was environment. Fiber became valuable enough to view as something other than waste.
“We use 100 percent of whatever comes in,” Idaho Forest Group (IFG) forester Doug Bradetich tells me as we walk across the log yard at IFG’s Laclede mill, a state-of-the-art plant cutting all local species to many specifications. He points to a pile of bark shed from logs as they are sorted into species-specific piles. “A loader uses a log to ‘sweep up.’ The piles go to our ‘hog fuel’ burner, which makes steam for the dry-kiln.”

In some ways, a beginning of keeping the yard clean is also the end of the story of how sawmills have changed in the past century. The efficiencies achieved – particularly in the past 40 years – are remarkable. 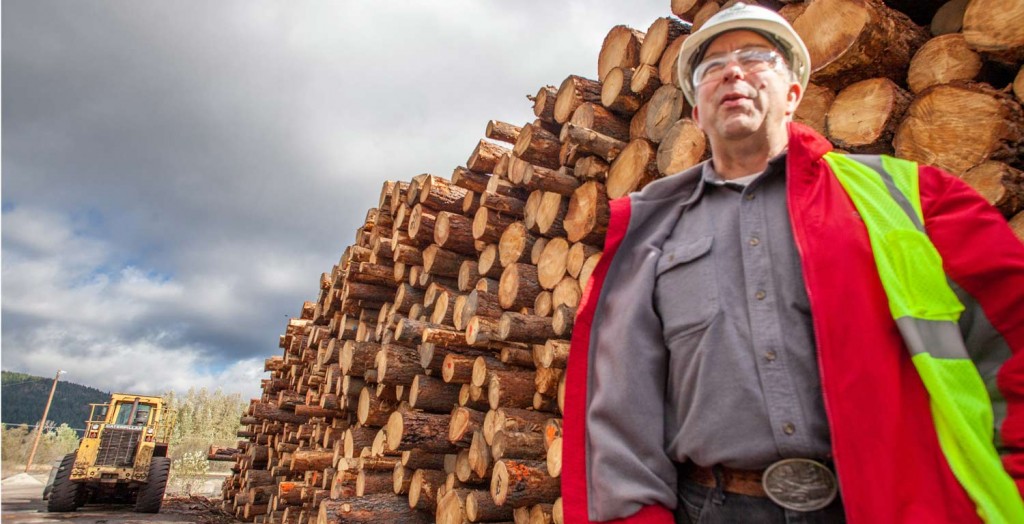 A model of safety
The biggest revolution of the 20th century in the mill itself is arguably moving from steam-driven machines to electric. This made mills safer by reducing chances of being scalded or killed by a boiler explosion or burst steam pipe. But a sawmiller with all his fingers was very lucky, very careful, or hadn’t worked in mills very long.
Today, employee safety is top priority. We donned hard hats, safety glasses, an orange vest each and screwed foam earplugs in for the tour. “Concern for employee safety is the biggest change I’ve seen in our industry,” Bradetich told me. “Years ago, if someone noticed a hazard – or got hurt – the problem got solved at the end of the shift – or at the end of the week. Today, if someone – anyone – sees a safety problem, we shut down and solve it now.”

That’s billion, with a ‘b’
IFG operates five mills arrayed down the Idaho Panhandle – Moyie Springs, Laclede, Chilco, Grangeville and Lewiston. The company is the result of a merger of Bennett Forest Industries with Riley Creek Lumber, which Chairman Marc Brinkmeyer, President Scott Atkison and partners used as the kernel from which to build IFG.

Bob Boeh, vice president of governmental affairs for IFG, has worked 44 years in the industry. He began with Riley Creek in 1997, came to IFG with the merger, and became vice president of resource procurement for all IFG mills. Now, he says, “My job isn’t as results oriented as the other, but still one that needs doing.”

Boeh is a tireless advocate for the industry, seeing it as a sustainable and vital part of the economy for years to come. “The capital investment we’ve made over time is our commitment to the future. We’ve built efficient, world-class mills, and we hope to attract young employees to work in them. We have an aging work force, and we’re looking for quality people to work in a vibrant industry using modern techniques. There’s a future for people who go into this business.”
When Boeh filled me in on employee numbers and production at IFG mills, I had to ask him to repeat himself. “Excuse me,” I asked, “billion, with a ‘b?’ ”

He laughed, “Yes, billion, with a ‘b.’ ”
With 850 employees, IFG produces 1 billion board feet of lumber annually. That’s 548,000 board feet per mill, per day, seven days a week. Let’s put that another way: 1.176 million board feet per employee, from mill to office worker.
The most productive mill, Chilco, cuts everything from 2-by-4s to 2-by-12s, and makes about 30 percent of IFG production. It’s also a model modern sawmill. A recently installed yard crane, visible as any tepee burner, has an overall reach of 12 acres and feeds truckloads of debarked logs into the stacked conveyors bringing logs to two “head-rigs.” Logs cut to length by computerized cutoff saws are sorted by diameter. Big logs go left. Smaller logs go right. And let the fun begin. 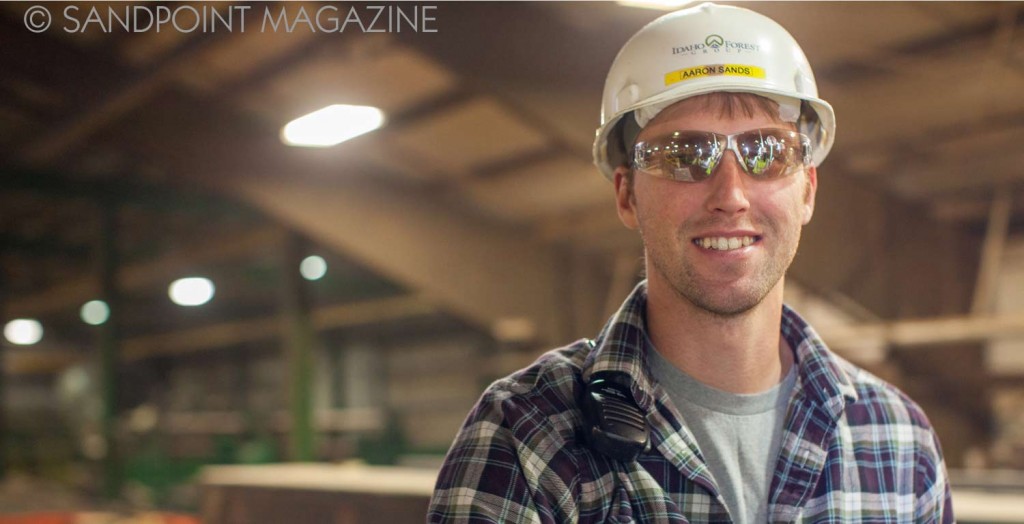 The sawmill ‘knows’
Sawmills are fascinating to watch at work, at least for me. They are still jam-packed with an amazing variety of machines, conveyors and motors, still noisy, still even smell the same, but they aren’t my father’s sawmill.

The present-day mill is part of a larger process, centerpiece of an on-demand system with foresters, trees and loggers on one end and markets and transportation on the other. It is a pull system.

“Our sawmill ‘knows’ what to make,” said Bradetich. “If we have an order for 45 by 75 cm by 5 meter Doug fir for the Japanese market, every phase of production knows, clear out into the yard. We concentrate on milling Doug fir of a certain quality until that order is filled.”

Other species and specs may be in the mill at the same time, but the entire mill – machines and humans included – is “looking” for appropriate logs to make into certain-sized lumber to fill a specific market demand.

How does it know? Steve Spletstoser, quality-control manager at Laclede, credits what he sees as the biggest change in sawmills in his 34 years on the job. “Computer technology. We follow timber from the woods to the store. Each piece, in one way or another, is scanned 50 to 60 times. Not only do we know what we’re making, we know what quality we are making.”
“We used to make as much lumber as we could,” said eight-year employee Aaron Sands, “but we’ve slowed down to make the best lumber we can.” Sands is an optimizer technician who keeps an eye on several machines from a monitor-filled booth in the heart of the mill. “We make appearance-grade lumber. The guy who goes to Home Depot to buy a couple of 2-by-6s for a Saturday project isn’t going home with a board with wane or a twist. And the Japanese are all about quality. They want pretty boards.” 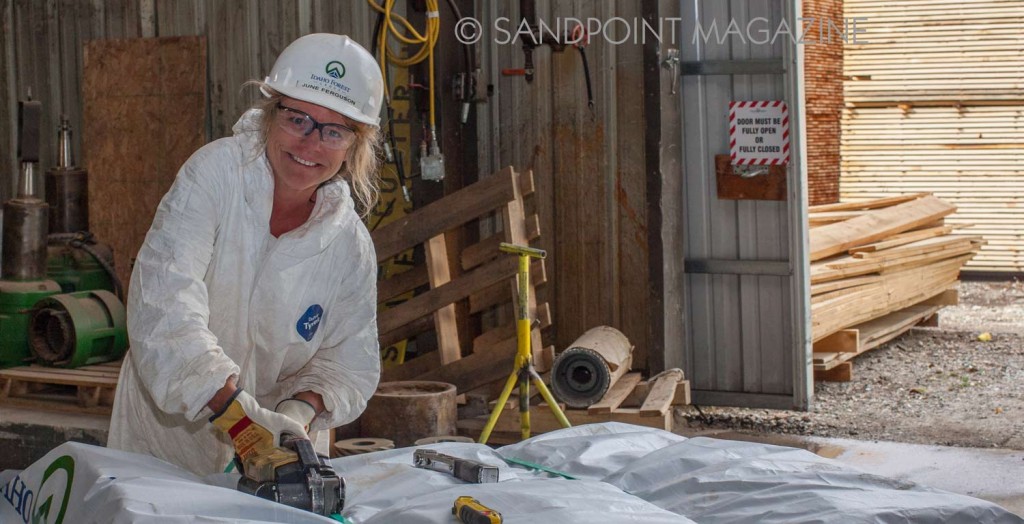 One of few women in production, June Ferguson works in packaging, above

Making pretty boards
At Laclede, logs are debarked, go to the cutoff saw and are cut to optimal length. Then, they go through a metal detector. If metal is found, the log is kicked into a bin to be human-inspected. If possible, the offending chunk is removed without ruining marketable boards hidden within, and the log returns to the production line. If not possible, the metal is removed and the remains are fed to the chipper.

“About 30 percent of our wood goes to the chipper,” said Bradetich, “to be used in paper or chipboard, depending on species. Chips might go to Pend Oreille Newsprint or to Millwood, near Spokane. Shavings from the planer go to chipboard. Sawdust might go to particle board or to Lignetics (in Kootenai) to be turned into pellets.”

All that might have gone to the burner in the old days is a resource today.

In modern mills, whether it’s IFG or Stimson, which has a mill at Priest River and a very high-tech small log mill at Plummer, scanning technology sends the next machine in line a computerized model of whatever piece of wood is headed its way, whether it’s a whole log, a slab from the first pass through the head-rig, or the cant resulting from cutting the slabs off. The head-rig “sees” a log and decides not only how thick a cant to make of it, but which way to hold it in relation to any sweep it might have, a decision that had to be made again and again by head-rig operators of old. Slab edgers “see” the board in each slab and cut it accordingly.

In a climate-controlled booth, operators work in comfort and relative quiet, although one can still feel logs moving through the mill. Joe Boyle keeps an eye on the head-rig and the Optimil, a relatively new and remarkable machine. “What I do,” Boyle said, “is watch for a train wreck. If something goes wrong, I shut everything down before real damage is done.”
Boyle has been at the Laclede mill for 37 years. Even so, to him the Optimil is amazing. This gang saw – it can cut multiple boards at a time – “looks” at a cant and not only determines the number of boards to be cut out of it, but maximizes yield by following the curvature of the log. It actually cuts boards that are arched, or even subtly S-shaped by adjusting saw angle as the cant proceeds through the saw.

“By following the grain through a cant, we increase yield and the strength of the board,” said Bradetich. “We stack ‘bent’ boards, weigh them down to straighten them and dry ’em in the kiln. They come out better, straighter boards.” Pieces that a few years ago would have gone to the chipper, now go to Lowe’s.

As the mill has become increasingly more efficient, so have timber operations and the kiln and planer.
“On the land,” Boeh said, “it’s become more mechanized, safer and more productive. We log more selectively, and we utilize everything.”

Which brings to mind that pile of bark out in the yard headed for the hog fuel burner. Laclede – or any modern mill – is not my father’s sawmill, but, like his son, he would find it fascinating.

One response to “The Sawmill Revolution”