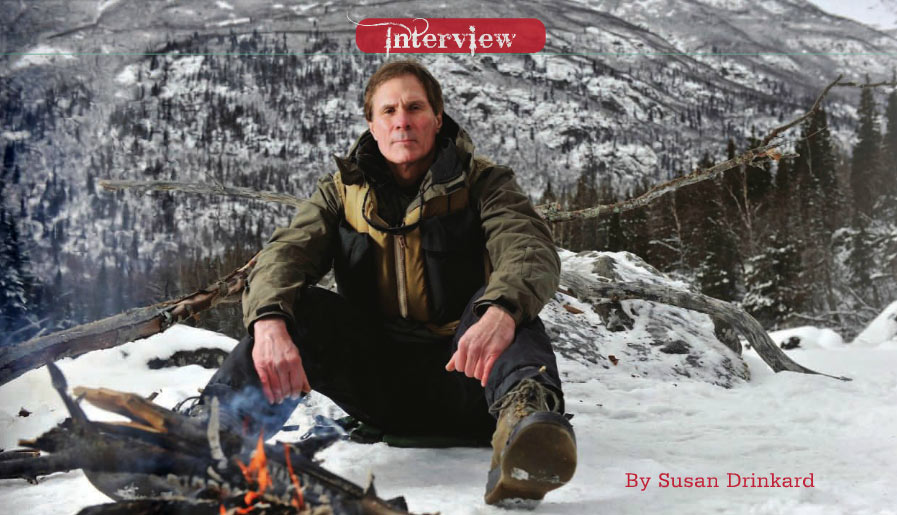 Stuart Nelson is a mild-mannered veterinarian when he cares for pets at Bonner Animal Hospital in Sandpoint, where he has worked with Dr. John Moody for 30 years. But if you saw the photos in magazines that have told his survival story, you would see the mettle and the Cherokee Indian heritage in his face.

His composure, along with skills and knowledge, has contributed to Nelson’s success as the chief veterinarian of the world’s foremost sled dog race – the Iditarod – a job he has held for 19 years. During his tenure, he has implemented strong educational components for the vets and the mushers in order to safeguard the health of every dog on the brutal course. The 1,000-mile race from Anchorage to Nome features every imaginable inhospitable weather condition for more than a week while traversing jagged mountain ranges, long stretches of tundra and windswept coastal regions.

Nelson, 61, is also a modern-day Alexander Mackenzie of sorts, an explorer of remote wilderness rivers in Canada. Every year, since 1983, he takes a three-week, 400-mile solo trip to tributaries of the Peel River that flows into the Mackenzie River in the Northwest Territories – places requiring a daring sense of adventure and essential survival skills. He is flown to a remote lake on the Continental Divide of the Yukon Territories where he portages for a couple days with his 41-pound inflatable kayak on his back, along with his gear and food, before finding the outflow with enough water to float his kayak. He tries not to spook the grizzlies by making noise. “I’ve developed a pretty good coyote yip to let them know someone else is out there.” Still, a grizzly once charged him and on another trip his kayak was nearly destroyed by a moose that stomped on it.

His survival skills were particularly put to the test in 2010 when he was caught under a wicked strainer, or logjam, on Canada’s Little Wind River that swept away his kayak along with his food, shelter and satellite phone. Using the contents of his pockets, he survived for 13 days by eating rose hips and raw fish he caught with fishing lures and line in miserably cold and wet weather until his eventual rescue by a group of Swiss canoeists. The full story can be found at: http://blue toad.com/publication/?i=59329&p=108.

He has never considered going on a survival show because, he says, he’s into wilderness travel, not exhibition, and besides, he doesn’t have television.

Stuart Nelson Jr., DVM, is a graduate of the University of Missouri School of Veterinary Medicine where his father, also a veterinarian, was on the faculty. His love of the North and the outdoors, his passion for exploration via waterways, the excitement of working with sled dogs, and his research on the animal athlete, have made for a life perfectly suited for this veterinarian who calls northern Idaho home.

How did you find Sandpoint?

I was leasing a small animal practice in Pennsylvania and took a drive out West … ultimately took a job in Coeur d’Alene, but as an employee I wanted more freedom. Dr. Moody was looking for relief help, and we made a connection. We mesh really well and it gives both of us a lot of flexibility.

How did you land the job as chief veterinarian of the Iditarod?

Back in 1963 my family went on a car trip from Missouri to Alaska, and I saw those big rivers and big country and it just grabbed me. My first river trip in the Yukon Territory was in 1979. … I was a practicing veterinarian by that time. I had worked with race horses back East – trotters and pacers – so I was interested in the animal athlete. In 1985 I saw an ad in one of the veterinary publications seeking volunteer trail vets on the Iditarod. I was a volunteer trail vet for nine years. In 1995, the chief vet was preparing to step down, and he approached me about taking over his position.

The Iditarod position is a paid one?

It is. It’s nothing to brag about pay wise, but I do receive an income for my efforts. Most of my work is actually done by e-mail and phone after I’m done at the clinic. I tell people it’s my full-time part-time job.

So you are also an educator for the vets as well as for the mushers?

Absolutely. That is one of my main purposes. The animal rights people can be pretty tough on us at times, but the point is that I have been proactive promoting research studies addressing the major health concerns and as a result of what we have learned, we have been able to attain years where we have not lost any dogs, which is tremendous. If you take an average year where there are 65 teams and 16 dogs on a team – that is over 1,000 dogs. That’s a lot of dogs to go 1,000 miles and get home safely. My goal is to bring my veterinary staff and the mushers up to the current level of knowledge and awareness of caring for the dogs so we know what to look for – abnormalities and the protocols for dealing with abnormalities.

Wouldn’t they know that already?

Of course you have the elite people (mushers) who are pretty darn sharp. They have been around dogs their whole lives and know a lot, but if you take someone who is very wealthy but not a dog person per se, it takes an effort to get them up to speed. They have to complete a certain number of qualifying races prior to signing up. And we give a report card to evaluate the mushers; this goes to the qualifying review board as part of the process to determine if they are really capable of participating safely in the Iditarod.

What is the primary health concern for the dogs on the trail?

Hydration is what we are evaluating for; body weight is a big thing. I have an acronym: HAW/L. It stands for heart and hydration, appetite and attitude, weight, and lungs. In a performance environment, things can happen faster. Everything is magnified and you have to be tuned into subtle changes. A vet might say a dog’s heart rate is too high, or there is too much dehydration. Even though they are eating up to 10,000 calories a day, body weight can be an issue. These are marathon athletes and they don’t have a lot of fat reserves to begin with, but they have to maintain a certain amount for the latter part of the race where there are high windstorms. If a team has to shut down and weather it out, then that could put the dogs at risk.

How would you describe the mushers?

More people have successfully climbed Mount Everest than have completed the Iditarod. You have to be pretty sharp mentally to deal with all the changes on the trail, and to come up with a strategic plan to try to win the race. You have to be tough physically and gutsy to be out there in different conditions. There are people who spend every nickel they have and devote every minute they have to running their dogs after their day job.

Do the top mushers come in with all their dogs?

No, statistically 10 dogs is the optimal number to finish with. There are a lot of reasons to drop dogs. Every dog requires feeding and booties put on, and all that takes time, so if you can go just as fast with fewer dogs, it’s more efficient and a time advantage. A musher can drop a dog for any reason. That isn’t to say that teams don’t finish with all 16, but I don’t know that anyone could win it with all 16.

We can’t neglect your survival story – 13 days in the Yukon wilds when everything barreled downstream without you. What was the most difficult thing about that experience?

The weather. You have to keep a fire going 24-7 to avoid hypothermia. I had constructed a windbreak out of brush and driftwood, but the third night it poured down rain, threatening my safety. Fortunately it stopped raining before it became totally dark and I could see to keep it going.

So you kept busy utilizing survival skills with the small items in your pockets?

Yes, I had a routine. I needed to stay by the river from 10 a.m. to 6 p.m., to keep an eye out for river travelers and planes. I did my wood gathering far from “camp” before and after that so I could easily find wood closer if I weakened. I picked 200 rose hips each day, worked on spelling out SOS and HELP with rocks and sticks on a big sandbar, tried to break out roots around stumps because that wood is long burning, used my mirror to attempt to reflect signals into the air, and it took a couple hours each day to catch a fish with the line and lures I had in my pockets – fish I ate raw to avoid attracting grizzlies.

Where do you live in North Idaho?

I live north of Bonners Ferry right up against a national forest. I can go out my back door and run up logging roads. I am three miles as the crow flies from the Canadian border. I have a cabin in Alaska too, but it is totally off the grid.

I have heard you don’t have a hot water heater. Isn’t that a difficult way to live?

I have a hot water heater, but I just don’t turn it on unless I have guests. I just heat up my water using a milk jug and it works well. I am pretty frugal and I don’t like to waste stuff.

How would you characterize yourself spiritually?

I am a Christian with conservative values related to individual responsibility and freedom.

Do you attend a church?

Yes, I do. Creston Baptist Church. It’s just over the border.

Were you a Boy Scout?

Yeah, but I was into camping and playing capture the flag, not merit badges.

What is your favorite thing about living here?

I love the access to the National Forest, the beauty, the peace and the creation that God has given us to enjoy. But certainly, if you want to experience a good meal or quality social experience, the opportunity is there. I’ve had many opportunities to reside in Alaska, but I’ve chosen to keep my home down here because it is still a special area.