Thrill of the shed hunt

Outdoorsmen hike miles of steep mountainous terrain all over North Idaho every winter and spring, often bushwhacking until after midnight with a pack weighing more than 100 pounds, all to find a simple antler that’s fallen off a deer, elk, moose or even a caribou.

“I get just as big a thrill finding a small, forked antler as a big moose palm,” said Chris Bier, a longtime Bonner County resident and Renaissance man.

Jeff Balch gets a similar thrill.

“It’s like finding gold in a pan or a needle in a haystack,” said Balch, the founder of BaseMap, a local company that makes map apps for hunters.

Shed hunting is one of the favorite pastimes in North Idaho. It’s like a treasure hunt that gives folks a good reason to get outside during the winter and spring months. Many people collect the sheds or give them away while some sell antler art or antlers for aphrodisiacs or pet toys.

Sheds fall off members of the deer family (otherwise known as ungulates) as part of the natural selection process.

Antlers are an indication of health and vitality, and females know instinctively that males with the best racks will produce offspring with the best chance of survival. Males may gather in “rut yards” to spar either physically or psychologically for control of a harem and for breeding. The females, however, are the ones who actually choose a suitor.

Only male deer, moose and elk grow antlers with the exception of caribou. Both male and female caribou sport those bony appendages. Antlers are actually growths from the skull and made of bone.

Deer and their relatives lose the antlers in the winter and spring and immediately begin growing new ones.

Growing at the incredibly fast rate of up to an inch per day, the immature antlers are covered with a rich vascular network called “velvet.” While in velvet, the antlers are extremely vulnerable to damage; the animal can bleed to death if the damage is severe enough. After the antlers reach full size, the velvet is rubbed off, revealing impressive racks that the females eye carefully for size, shape and symmetry. 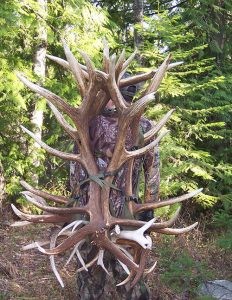 An elk shed can weigh 40 pounds.

Experienced shed hunters learn where the ungulates winter and are likely to drop their antlers. The location of these favorite spots is guarded as carefully as a fishing hole, huckleberry patch or powder stash.

“It takes a good eye,” said Bier, who spotted a shed from 50 feet away which the rest of the party didn’t see until 5 feet away.

Many serious hunters use “horn dogs” who have been trained as pups to seek out sheds. With a good dog, it is possible to gather up to 25 sheds in one day. They can locate them in more than a foot of firm snowpack.

White-tailed deer tend to winter in lower elevations, often around farms and ranches. Many times, their antlers fall off when jumping over fences or rubbing underbrush.

One winter, Bier met some guys who told of bull moose nearby with their antlers still on. Bier pulled out his 35mm camera hoping to get a photo. When he spotted the moose, a bull shook his head, throwing off an antler. It took a while to retrieve the fresh shed in the deep powder. He followed the moose for hours, yet the other antler never dropped.

Antlers have historically been used to create tools, weapons, ornaments and toys. Nowadays, they are made into lamps, buttons, necklaces, belt buckles, chandeliers, handles of all sorts and earrings.

Kevin Sawyer is a local antler expert. Inside his “Antler Shop” (man cave), Sawyer creates masterpieces ranging from chandeliers to earrings. He and his granddaughter spend hours dreaming up new uses for sheds including the scraps that would normally be discarded.

Sawyer has techniques for repairing broken or gnawed-on sheds that even experts cannot detect. He is so in tune with the deer family that he has observed that if an animal has been injured in the left shoulder, for instance, the antler on the right side will be deformed in some way.

A few years ago, the Chinese purchased antlers from the United States to grind into a powder for aphrodisiacs. Now the market is driven by pets. Antlers are cut and ripped into dog chews for the large pet supply retailers. Even partially chewed sheds can fetch up to $14 per pound.

It is legal to possess and sell sheds collected on Idaho public land. No license is needed. Shed hunters, like other outdoor recreationists, must obtain permission to cross or look for antlers on private land, and must observe transportation restrictions on federal and state public lands. Antler hunters are asked to avoid disturbing animals during winter while they are conserving their resources in order to survive the winter. Different rules apply to national parks, however. Nothing, including antlers, horns, rocks, old cans, etc. may be removed from the “living museum” of any national park.