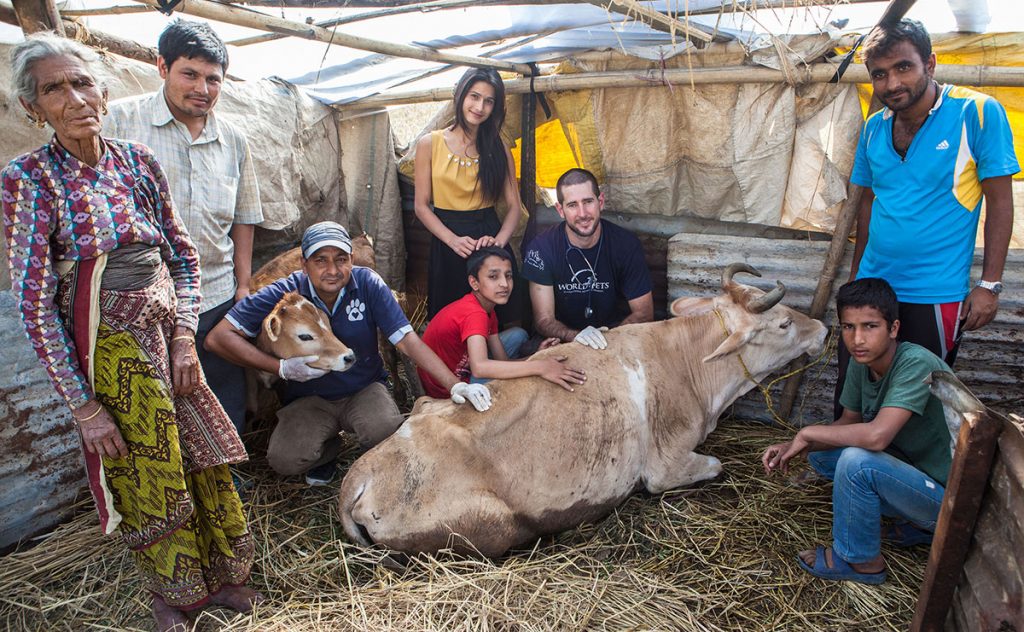 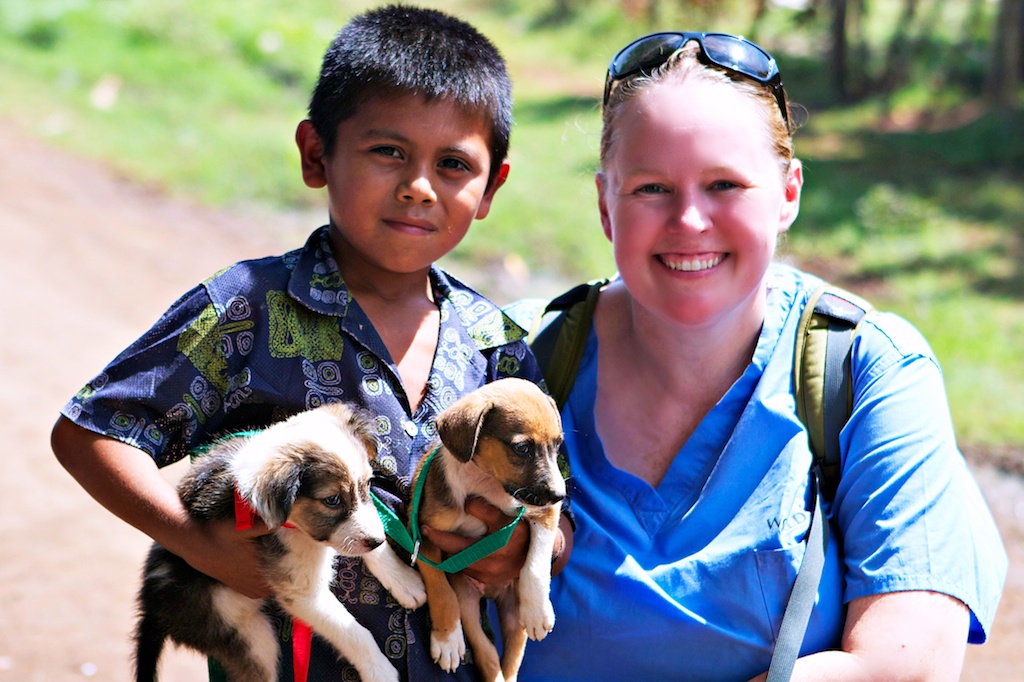 As a 9-year-old living on a small farm in Cocolalla, Cathy King wrote to Washington State University asking to tour its veterinary school. Little did she dream that her eventual veterinary career would lead to founding one of the largest, most-respected animal welfare programs on the planet.

Dr. King created the global humanitarian program World Vets (WV) in 2006, inspired by a week-long volunteer mission at a Mexican animal shelter. It was initially funded from a donation jar on the counter at her Hometown Animal Hospital in Deer Park, Wash.

“Sherrie Boston, one of my wonderful clients, made a $50 donation in memory of her dog Buddy,” King recalled. “Honoring that donation really motivated me to get things off the ground and get serious about making World Vets into a sustainable organization.”

In a decade, World Vets has evolved on a grand scale with a pool of more than 4,000 volunteers, mostly from the veterinarian profession but also lay people taking turns at weekly missions, all covering their own expenses. Several other veterinarians with Sandpoint roots have volunteered in the South Pacific and Latin America.

Astonished by the rapid interest and rapid growth, King sold her veterinary hospital in 2008 to work strictly on an international basis. Sixteen veterinarians, most with their own private practices across the United States, serve as field service veterinarians, leading the majority of international projects.

“My role has evolved over the years,” King said. “In the beginning I was the lead vet on all the international projects. Through the years I have pretty much done every job in the organization from web design to grant writing to inventory management. Some of the primary things I [now] do are cultivate and develop new programs when we start working in a new country, including site visits and logistical planning.”

She also oversees and manages the WV response program when volunteers deploy on international disasters.

World Vets has helped with rescue missions in at least six major disasters, including the 2010 Haitian earthquake and the 2011 Japanese tsunami.

Teams of up to 15 care for animals, participate in disaster relief or provide education for local veterinarians in 45 developing countries on six continents. The organization has negotiated formal agreements with more than a dozen foreign governments to commit to no longer poisoning dogs.

That initial Mexican experience opened her eyes to the ongoing problem of free-roaming dogs, which she estimated in a 2013 “TED Talk” to amount to 400 million worldwide.

“I worked with local veterinarians, taught them surgical techniques and helped treat animals at the shelter,” said King, 43, a lifelong dog owner. “I learned the plight of homeless street dogs that were poisoned and suffered horrible deaths in Mexico and in many other countries around the world.”

The dogs were poisoned to prevent rabies, eliminate dog packs or “to just ‘clean up’ the cities before tourist season,” she added.

World Vets evolved from King’s belief that a better solution existed: free spaying, neutering and health care for the dogs, many of which were owned and loved by families who could not afford such care.

King spearheaded programs with other volunteers to set up long-term spay and neuter clinics after she discovered those skills were not generally included in Latin American veterinary curricula. In 2011, with financial help from the Brigitte Bardot Foundation, the Latin America Veterinary Training Center opened in Granada, Nicaragua.

The facility has served more than 700 veterinary students from eight Latin American countries, doubling as an educational center and a free animal-care clinic for street dogs, working horses and other farm animals.

As its impact continues to grow, World Vets has received several notable recognitions, including United Nations Foundation Class Award as the Top Animal and Wildlife Charity Worldwide in 2014.

“The award ceremony was a black-tie event in front of an audience of 3,000 people in San Diego,” King said. “Receiving that award was a great validation of all the hard work we have done.”

U.S. Army veterinarian Dr. Cherise Neu, a Sandpoint native, served for three months in 2013 as veterinary officer in charge of another facet of World Vets, which collaborates with the U.S. Navy on humanitarian aid missions providing medical/dental and veterinary aid to different regions of the world. She led a 14-person team on a ship-based mission, which took them to the South Pacific during four weeklong stops.

“We spayed and neutered more than 400 dogs and cats, plus treated and examined thousands of farm animals,” said Neu, a 1992 Sandpoint High School graduate.  “We worked hard, long hours, often outside in heat and humidity. I think we all loved it.”

“Every trip I say is my favorite, and then the next one comes along,” Ward said. She recently turned 50 and, with visiting Peru on her bucket list, she achieved two goals, volunteering in Cusco and San Sebastian and adding extra days for sightseeing.

“I had the opportunity to work with some young women Peruvian veterinarians in Cusco … helping, teaching and working beside them,” Ward said, noting that such opportunities are especially beneficial to the locals because they lack clinical training and basic equipment available to U.S. veterinarians. “We performed a life-saving blood transfusion late one night after we had already worked a 12-hour day,” she recalled. “We performed this transfusion with the husband of one of the vets passing blood-filled syringes to me in a cage where I was giving them to the other dog.

During her teenage years, King worked as a farmhand, cleaned kennels at Pend Oreille Veterinary Service, took 4-H vet science, graduated with honors from Sandpoint High School in 1990 and moved on to WSU, where she received her veterinary degree. Later, King earned a doctorate in animal physiology from the University of Idaho and eventually opened her hospital in Deer Park, Wash.

“I had always wanted to be a mixed animal vet,” King said. “I worked on horses, beef cattle, dairy cattle, sheep, goats, dogs and cats. It was a great mix of farm calls, surgery, medical cases and species. International work was never on my radar.”

Inspired by volunteers, King directs World Vets into its second decade, expanding its scope both geographically and educationally and adding to the mission of providing street dogs a better life.

“It’s very satisfying getting to work with so many amazing vets, techs and students from around the world,” King said. “We send out a survey to all of our volunteers when they return home from an assignment. One of the frequent comments we get is ‘This was one of the most amazing experiences of my life.’ ”

King values that local animals and communities benefit from WV services while volunteers have life-changing experiences. “That’s a good feeling,” she said, “and it makes me motivated and happy to go to work every day.”

World Vets Veterinarian Dr. Springer Browne (middle) helps a cow injured in the 7.9 magnitude Nepal earthquake in 2015. Nepalese families such as the one shown here rely on their cows, chickens and goats for subsistence.

World Vets Founder Dr. Cathy King with a Nicaraguan boy who brought his puppies for treatment at an outreach clinic.