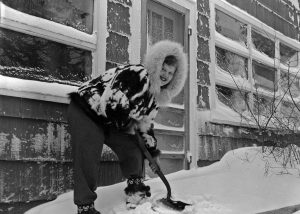 The Blizzard of ’69 actually started in 1968. It quit – finally — in 1969, after six weeks of winter on steroids. My recollection – augmented by others’ memories and archives at the museum — is this:

Dec. 30, I open the back door to go to work at Travler’s Motel and – holy snow flakes! The walks are full. My car is buried. Snow is horizontal.

I face into the blowing snow and begin the wade through two feet of snow to the motel on Fifth. The lobby door is snowed in. From both sides. A foot of fine snow has sifted in under the door. I shovel both sides. The thermometer reads minus 30. Holy frostbite!

The motel is full of skiers. They can’t get to Schweitzer, which is closed anyway. In 1969, Sunday in Idaho is dry, but skiers from the country up north, ever prepared for such emergencies, have broken out private supplies of alcohol and are having cocktails with their eggs. At 8 a.m., I call my boss for advice.

His sage words to this high school senior: Stay out of the restaurant.

Next morning, minus 37. The people from up north brought enough for Monday, too.

Thus began the blizzard, but snow has been coming in record amounts — 32 inches in December, 12 inches over average. By Jan. 16, six more than the 24-inch January average has already fallen.

Our dad’s 1967 F-100 four-wheel-drive pickup with a newly installed block heater and tire chains is the go-to neighborhood transportation option. The sheriff allows snowmobiles on public roads. Most curbs are piled so high that there is no more piling. It keeps coming.

By Jan. 23, the storm has become old news, moving to the back page of Section A of the Sandpoint News-Bulletin. That day, though, the temperature drops to minus 14. Here we go again. Sixty-seven inches of snow have fallen. Schools are still closed. Kids are incredulously happy – giant snow castles are being built in massive curbside piles – but they are the only ones. The school board begins talking about school on Saturdays. Ha! The teachers put the skids on that.

Jan. 30, weather comes back to the front page. “Bonner County struggling out from under worst storm in more than 20 years.”

Ten lows in single digits or below zero since Dec. 28 and 82 inches of snow, 20 since Jan.16. Twelve-foot drifts in town, 20-foot drifts in the Selle Valley. The county begs the state for a rotary plow. Papa Bear, aka Chair 4, aka Sunnyside, opens at Schweitzer, with snow accumulation at 161 inches, but nobody can get to the celebration.

The Boy Scout troops of Sandpoint get stranded at Camp Stidwell on Mirror Lake. Troop 111 and the Sea Scouts, of which my brothers are members, enjoy the luck. The F-100 provides a ride home for many. As a last hurrah, the Idaho Elks Convention gets stranded the first weekend in February. They, too, have brought emergency supplies. Once again, I stay out of the restaurant on Sunday.

It was the coolest.