400 Years of history now resides at the Humbird Hotel

In the late 1990s, Tom Trulock was Schweitzer’s mountain operations manager. Ron and Bobby Stutzke were logging for him in the woods below Musical Chairs and found a huge, wind-thrown Douglas fir that Trulock guessed had been down for 15 years. It was at least six feet in diameter. They counted 350 rings, which put its germination somewhere around 1630. Pilgrims were on the continent only a decade when it sprouted. 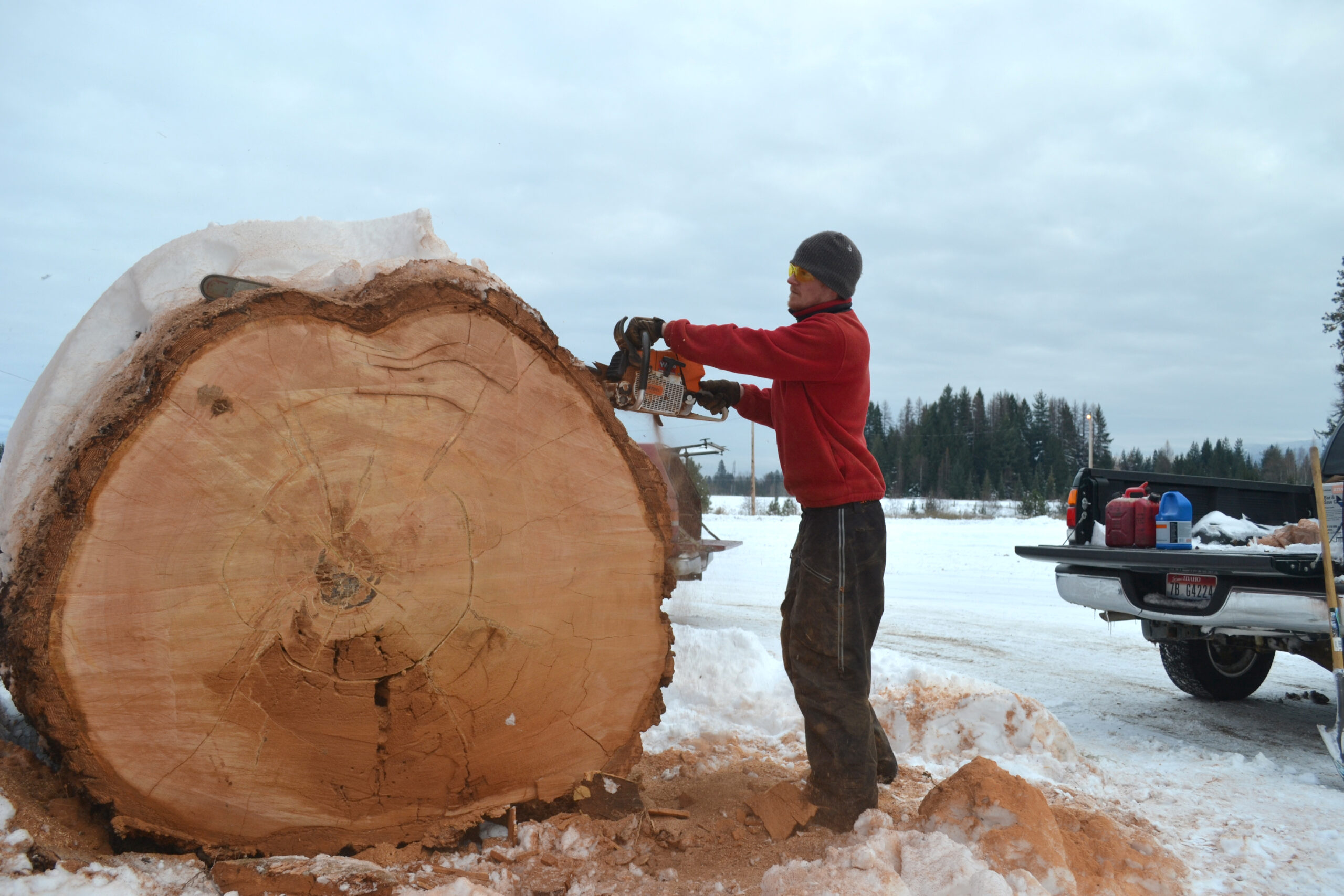 GLEN COLLEN SAWS THROUGH THE TRUNK OF WHAT MIGHT HAVE BEEN A U.S. RECORD-HOLDING TREE. PHOTO FROM THE COLLECTION OF TOM TRULOCK.

There was opinion that it might be the biggest Doug in Idaho. If it wasn’t, it was almost. The largest Rocky Mountain variety of Pseudotsuga menziesii in Idaho — and the nation — was recorded in 2018 in Clearwater County with a diameter at breast height of 73 inches. Trulock’s tree was close. Considering that it had been down for 15 years, it might well have been the U.S. record when it was living.

Trulock decided to save some of it for what was then a vague idea about a display. He had the Stutzkes carve a 6-foot section off the butt and transport it to the Red Barn, where it went into storage. The rest of the tree that was usable became firewood. A lot of firewood. 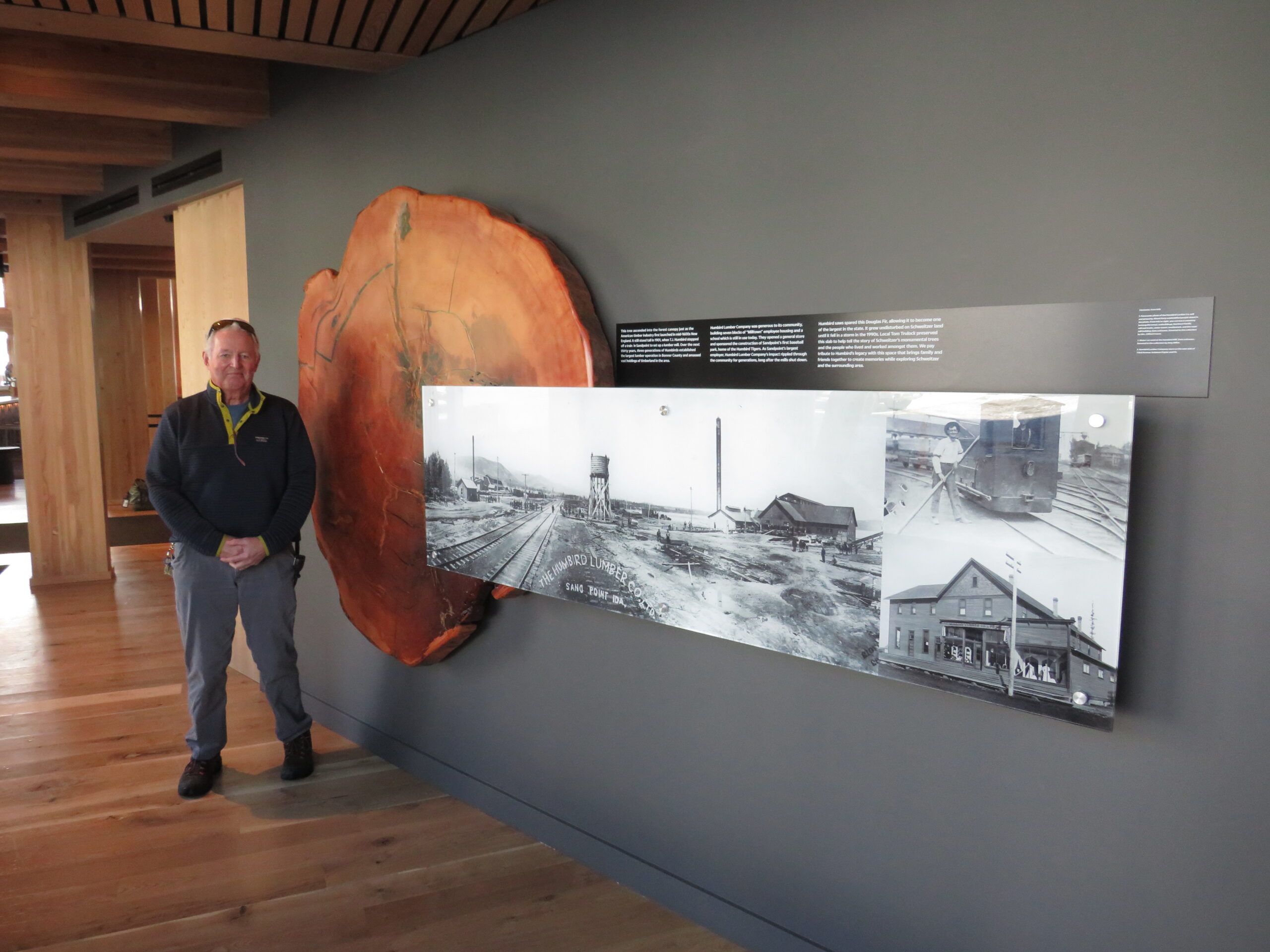 TOM TRULOCK NEXT TO THE FINISHED PRODUCT IN THE HUMBIRD HOTEL. PHOTO BY SANDY COMPTON.

In 2011, Trulock had Cole Gollen cut a round off the top — the smaller end — of the chunk Stutzkes had delivered and then put that into one of the smaller buildings to get it out of the weather. Cole took a slab for himself, as well. The remaining piece sat in storage for another 10 years. Until the Humbird Hotel came about.

“When the hotel naming process got underway,” Trulock said “and it appeared that Humbird and a timber theme were going to prevail, I realized that this might be an opportunity to use the slab.”

Hotel architect Skylab liked that idea and contacted John Edwards and Misty Mountain Furniture to see what could be done with the big round that remained. Edwards consented to try and brought it to their shop in Sandpoint. This involved a backhoe, a flatbed truck, and a forklift. 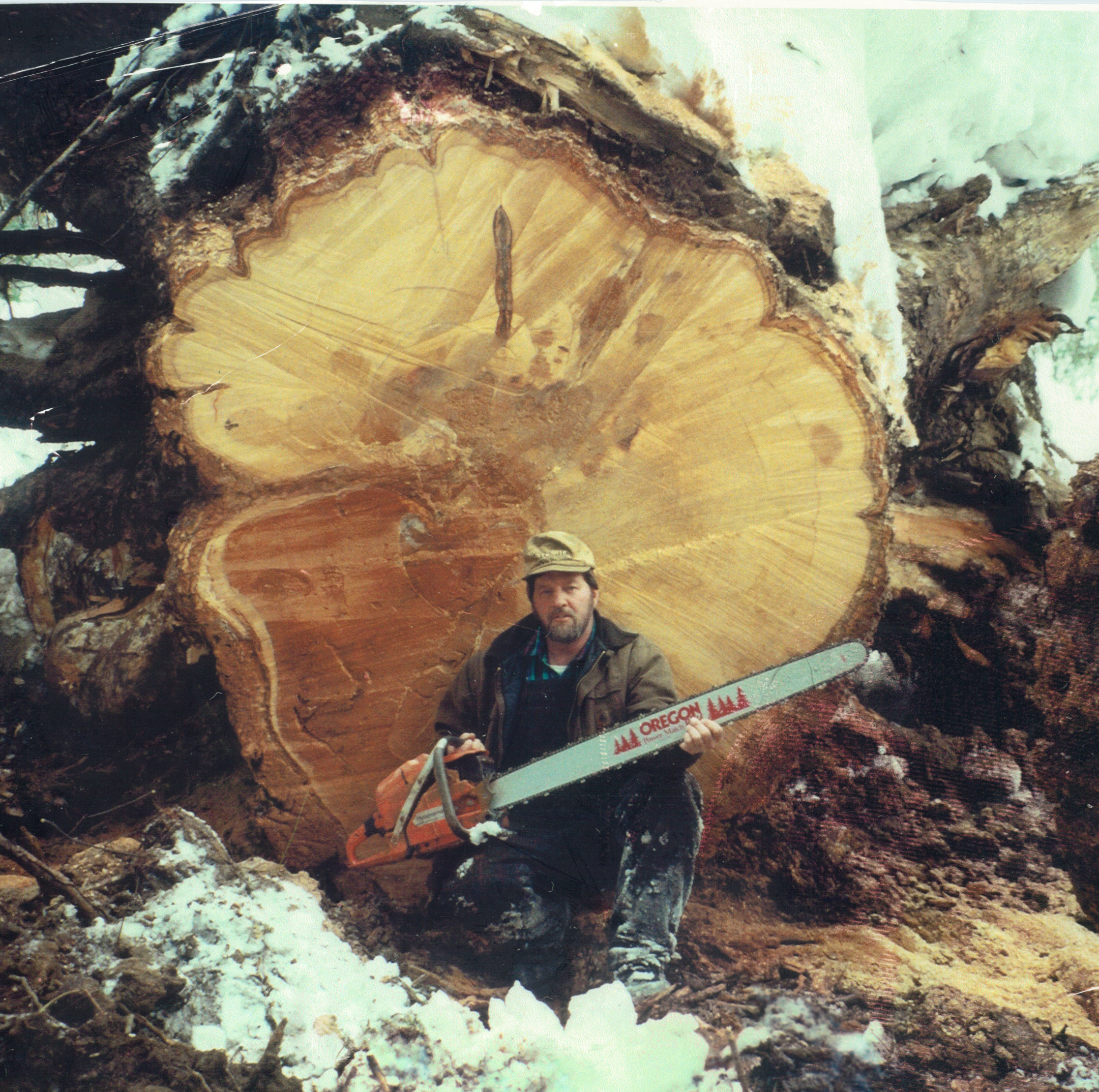 RON STUTZKE WAS ONE OF THE MEN WHO CUT THE TREE DOWN. PHOTO FROM THE COLLECTION OF TOM TRULOCK.

“When we first got it,” Edwards said, “it was 10 to 12 inches thick and it weighed maybe 300 pounds. It was too thick and heavy for the hall space it’s in, so we got an Alaska chainsaw mill and cut it down to five inches thick.” The piece was also fragile — checked and breaking into pieces. Edwards and crew had to take some extreme measures to hold it all together— using spray foam and epoxy — before they milled it.

“After that, we sanded it smooth and epoxied the surface,” Edwards said. “It took five rounds of epoxy to seal it. Then, Golden Rule Manufacturing came up with a really cool mounting bracket.”

Twenty-five years after the Stutzkes found it, a piece of very local history sits in the Humbird Hotel alongside a short history of Humbird Lumber, a reminder of the company and the industry that built Sandpoint in the first place. Trulock’s perseverance is also on display.