Maintaining the old trails and building new ones never stops

You only need to drive by the trailhead for Mickinnick Trail — at any daylight hour, in any weather, in any season — to realize that people around Sandpoint like to use their trails. The parking lot is never empty, and often it’s overflowing. Many other area trails are almost as well loved. 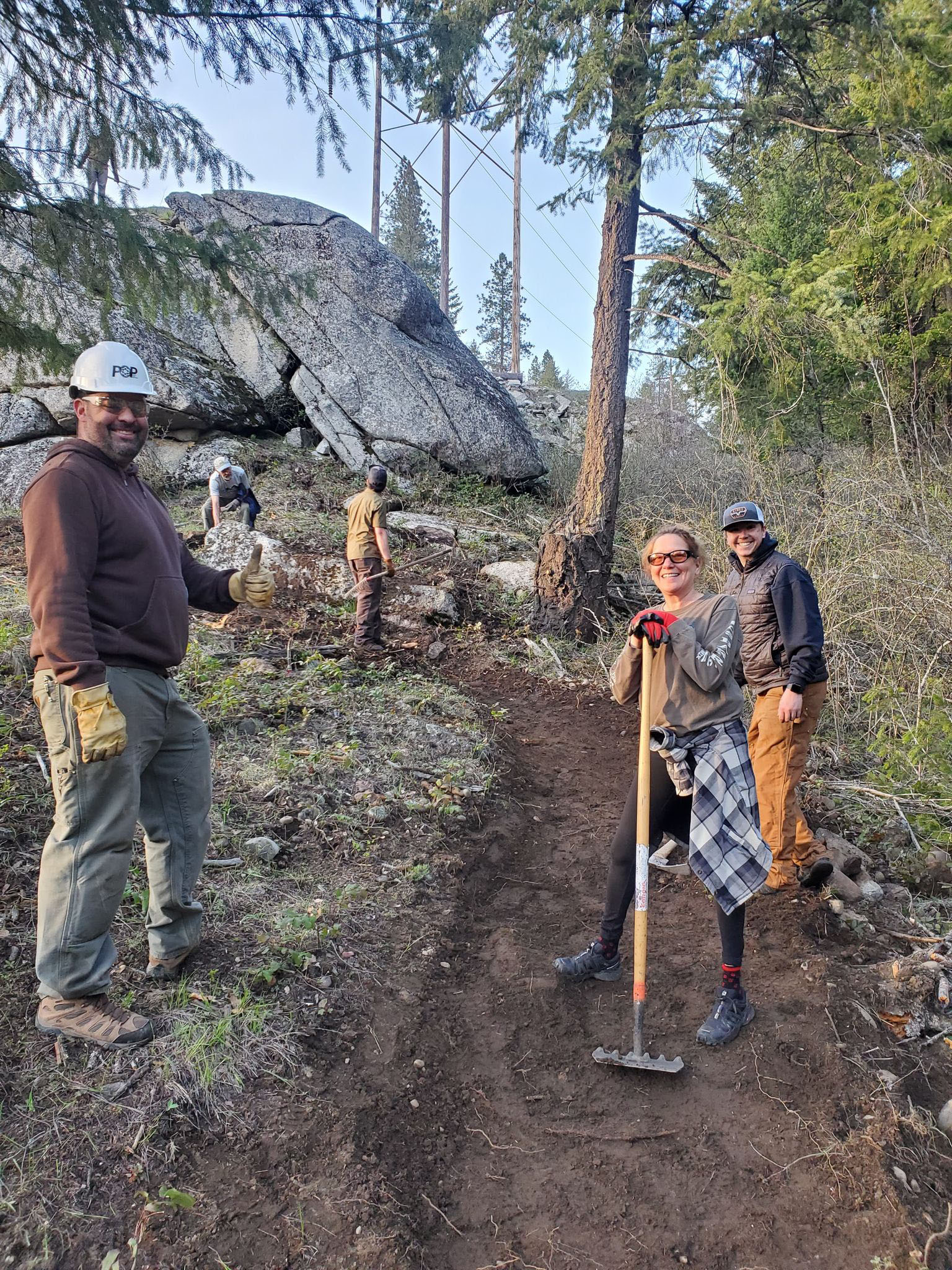 Fortunately, we have a good and ever-growing network of places to hike and bike. Trail users seem to like building and maintaining trails almost as much as they like traveling on them.

The Pend Oreille Pedalers work on trails in and around Pine Street Woods and in the basin below Schweitzer. Although their name suggests their origins as a biking group, the trails they build are popular with hikers and runners as well. They have rocketed into overdrive since they funded a position for an executive director last year, enthusiastically recruiting both newcomers and old-timers to create many miles of new routes in both locations.

Meek, who helped fight fires for the Idaho Department of Lands for 35 years, describes hard labor in company with others as “a simple pleasure.” Raynor, a stay-at-home dad, also enjoys the work. “I never built a trail before I came here. Turns out it’s fun,” he said. After a day of household chores and child care, “It’s nice to get out and dig and cut and do some manual labor.” He and his wife, Sandpoint physician Hannah Raynor, moved here in 2018, and their son Bjorn was born the same year. Bjorn and Hannah join him on some of the Saturday work parties.

The Friends of Scotchman Peaks Wilderness doesn’t build new trails; instead it maintains 16 already existing trails with a total length of 95 miles, all within the area around Scotchman Peak at the eastern edge of the county.

A major annual chore is removing trees that have blown down across trails during the winter. Over the past couple of summers, much of this work has focused on the bottom half of Goat Mountain Trail, which “in some guidebooks is described as the steepest trail in all of Idaho,” said longtime Executive Director Phil Hough. “The first two miles now have no blowdowns and fabulous views,” he is pleased to report. But he estimates there are 400 more blowdowns on the upper two miles of the trail, and that removing them all will take another summer or two.

Among the most enthusiastic of FSPW’s recent volunteers is Perky Smith-Hagadone, who retired from a career as a public schoolteacher and principal in June of 2020 to bask in the relative ease of trail work. Smith-Hagadone particularly seems to enjoy removing blowdowns with a crosscut saw, possibly because it’s easier than herding sixth-graders. “Cross cutting is awesome. These trees are not little — two-and-a-half feet in diameter, completely across the trail. It’s exciting when that tree goes.” She notes that it’s a little scary to be on the end of a crosscut saw under such a tree, “but there’s a huge discussion about where it’s going to roll. Nobody has ever gotten hurt.” 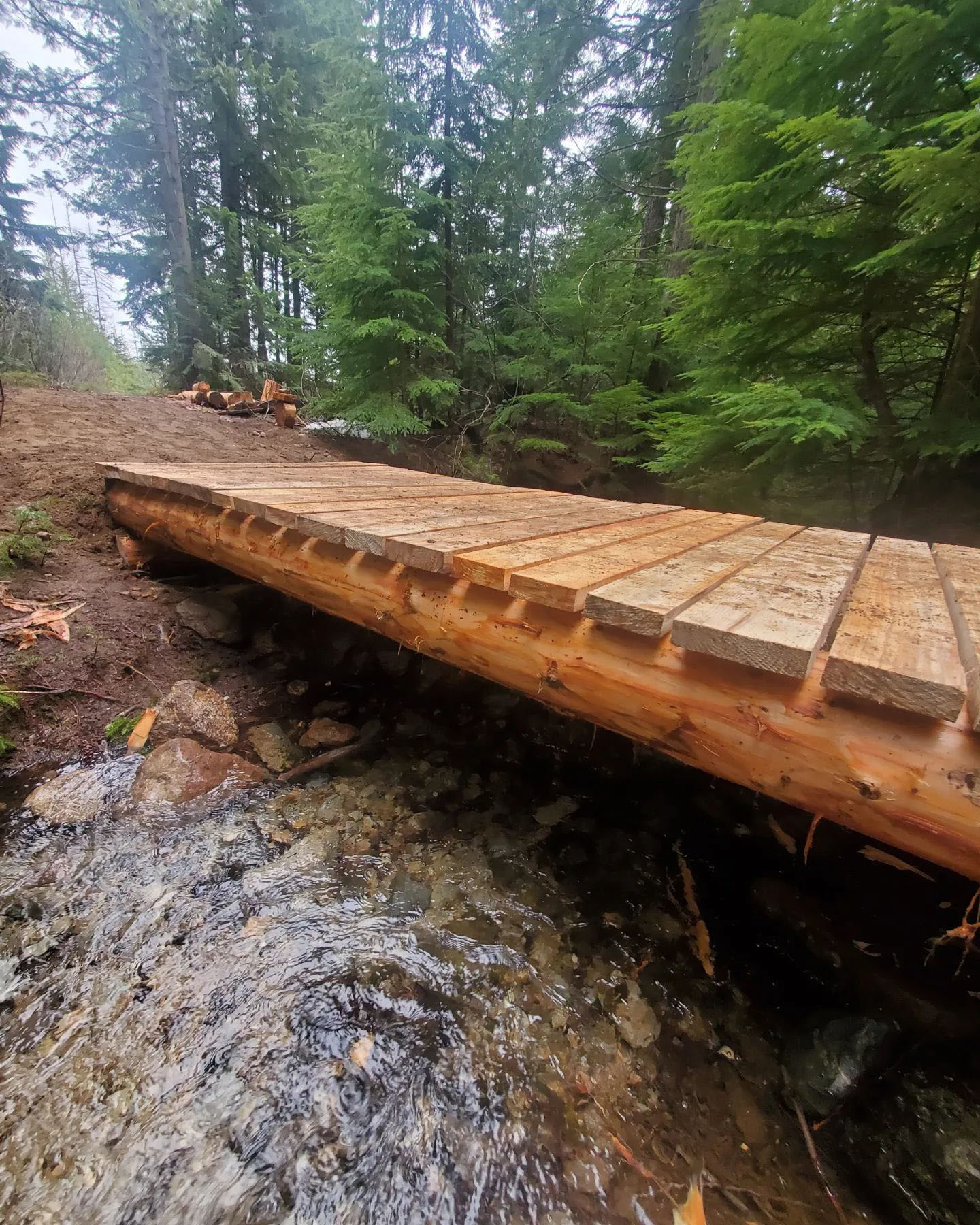 Several trail builders echoed their organizations’ concern over safety. The worst injury that anyone seems to have incurred is bee and wasp stings. People who try to root out beargrass with a Pulaski axe run the inherent risk of digging up a ground nest as well.

FSPW cooperates with the Idaho Trails Association to provide first aid and leader training to both groups. ITA’s work this year will include 73 different trail projects, 18 in the Idaho Panhandle National Forest alone.

“There are so many trails in IPNF, we don’t need to build new ones; we need to keep the ones that we’ve got alive and well ,” said Tom Dabrowski, a board member of ITA. The list of projects they work on will sound familiar to local hikers: it includes trails to Pyramid, Ball, Harrison, and Beehive lakes as well as Chimney Rock. Most trails require maintenance every three years, but “some we have to do every year,” Dabrowski said, such as the aforementioned Mickinnick Trail. “It is an enormously popular trail that always needs to have trees and brush removed.”

Last year Dabrowski led five different work trips, two of them each a week long. While hard work outdoors attracts him as much as anyone, “The thing that I love the most about trail projects is the people,” he said. “There’s something special about being outdoors, working outdoors, figuring out how to get around this tree, or how to move this boulder. You get to work with people on challenges like that every day.”

Two other trail-building groups include the Sandpoint Nordic Club, whose members work in summer to maintain the wide trails in Pine Street Woods for winter skiing, and Schweitzer Mountain Resort, whose employees and contractors  build and maintain ever more miles of hiking and biking trails on their property.