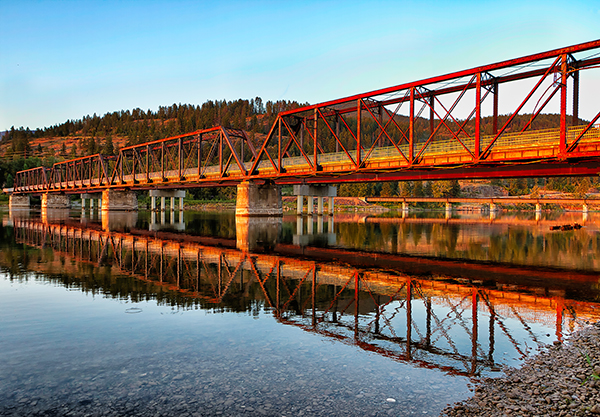 In an area with so much water, getting there often means crossing a bridge. Take a fresh look at what passes under the wheels of your vehicle

Idaho isn’t known for its famous architecture, but sometimes the coolest thing about a location isn’t what you see, but rather, how you get there. Especially when ‘how you get there’ is by crossing some amazing bridges.

Sometime around the 1900s, Tom Craig’s two-and-a-half-year-old son accidentally chopped his toe off. The family lived south of the Pend Oreille River and the only way to get to the doctor in Sandpoint was by ferry, rowboat, or the train trestle. Tom jumped onto a passing train and rode into Sandpoint, where his son was able to see a doctor for treatment.

The emergency highlighted the need to build a bridge to link communities on both sides of the river. County Commissioners began to plan for a new bridge. Sandpoint’s most famous bridge, the Long Bridge, was advertised as the “Longest Wooden Bridge in the World” when it was opened for use in March of 1910. The Wagon Bridge, as it was called, included a drawbridge to allow steamboats to pass through. 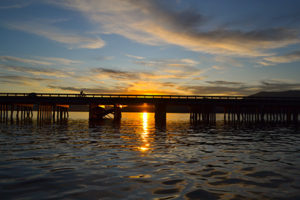 A second bridge was built in 1933 when the wood of the first began to fail; again, it was constructed of wood. Just under 3,000 larch pilings were driven into the river bottom to support the bridge, and almost three million feet of lumber was used in stringers, braces, and decking. Years of Idaho winters were hard on this wooden bridge, and by 1956 a replacement was needed; a two-mile-long, concrete and steel open bridge was built. A fourth bridge was built in 1981, and the third bridge was left as a walking/biking route, offering breathtaking views of the lake, river, and mountains.

Almost as famous is downtown’s Cedar Street Bridge, which began life as a foot bridge on L.D. Farmin’s property crossing Sand Creek late in the 19th century. Damaged by high water in 1893, it was rebuilt in 1895. But by 1901, Sandpoint residents were petitioning for a new, and safer, bridge to be built across Sand Creek. After failing to get the city to purchase his bridge and build a new one in its place, Farmin built a bridge himself, selling the span over the creek to the city in 1906 to carry foot traffic from downtown to the train depot. In 1933 it was expanded to allow for automobile traffic. As train travel declined, the bridge fell into disrepair once more and was closed to traffic in 1971, and condemned in 1980. But local businessman Scott Glickenhaus saw the opportunity to create a unique structure for Sandpoint, leasing the property from the city and constructing an Idaho version of Italy’s Ponte Vecchio covered bridge. Today the bridge is an enclosed public market that spans 400 feet across Sand Creek; it is the only marketplace on a bridge in the United States. The bridge features a unique passive solar design, multiple support pilings driven into Sand Creek, and tamarack timbers selectively harvested in Idaho and Montana.

The Bridge Street bridge is historically connected to the Cedar Street bridge. A dueling bridges battle began when L.D. Farmin sought to have the city purchase his bridge across Sand Creek; the city declined, stating it didn’t have the funds to rebuild it as was needed. U.S. Commissioner and local beer salesman Ignatz Weil wanted a bridge built on his property just south. That kicked off a dispute when Farmin tried to get an injunction to prevent Weil from building his bridge.

Farmin had to travel to Rathdrum, the county seat at the time. During his two-day trip Weil saw an opportunity and had his bridge built before Farmin arrived home with his injunction. That bridge is the Bridge Street bridge, which now connects to City Beach.

Building a bridge for the railroad that crossed Lake Pend Oreille was no small feat in the early 1880s, but placing the tracks leading to the bridge was reportedly harder than building the bridge itself, and required three separate trestles in the last 3 miles approaching the lake. The finished bridge, including the earthen causeway leading to it, was 1.6 miles long, and some of it crossed water so deep it needed pilings up to 100 feet in length. The BNSF bridge itself is almost three-quarters of a mile long. Thousands of men worked on the project. Repairs were made to the bridge in 1905, and again in 2008, but the historically significant through truss swing span is still in place. This bridge was an iconic image in the novel “Housekeeping,” which earned author Marilynne Robinson a a PEN/Hemingway award for best first novel. The book was a finalist for a Pulitzer prize, which Robinson won with her second novel.

Because there is only a single railroad track across the bridge, trains often have to wait at idle for their ‘turn’ to cross, many times blocking local roads. This caused BNSF railroad to petition to build a second bridge at this location; that work began in the fall of 2019. 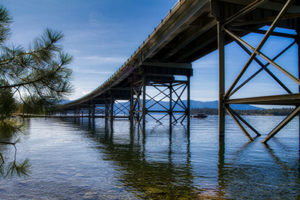 The “Bridge to Nowhere” in Hope was built in 1967. A redesign of U.S. Alternate Highway 10 (now Idaho Highway 200) that sought to avoid steep hills and dangerous curves required building a bridge over a railroad right-of-way that needed to arc out over Lake Pend Oreille in order to protect the historic cemetery located above it, and the nearby Hope School. With pilings initially stretching out into Lake Pend Oreille, seemingly headed to Warren Island, the media soon dubbed the project “The Bridge to Nowhere.” The project was plagued with problems. An initial embankment built for abutment 2 slipped into the lake overnight (instead of finding more fill, the crew initiated a change order, replacing the abutment with a pier); the barge holding the project’s crane sank twice during storms; and a few times the boom collapsed when moving supplies. A more exciting development occurred when the crew discovered pieces of silver ore in the core samples pulled from the fifth tower location.

The community of Clark Fork has an interesting history of bridges.

This location was one of the easiest ways for people to reach the northern part of the state during the gold rush years. The first bridge to be built was for the railroad around 1891; people crossed the river via ferry. But in the early 1900s, the community was calling for the construction of a bridge they could use. As early as 1912 local papers carried notices calling for bids for a wagon bridge across the Clark Fork, estimating in 1916 a cost of $88,000 for this “much-needed bridge,” and in 1918 carried notice that W.E. Johnson, John Derr and others petitioned for the construction of “a bridge about 1,000 feet long across the Clarksfork River at or near where the present ferry is situated.” Those calls took root, and in the fall of 1919 a fair was held to dedicate the new bridge, which featured “five steel spans each 200 feet long, resting on six concrete piers… [and] designed to carry a load of 20 tons,” reported the Northern Idaho News. An order of the county commissioners (Idaho Statute No. 1392) was posted on a sign over the bridge: “For riding or driving over this bridge faster than a walk $100 fine or three months in jail.”

in 1956 Northern Pacific constructed a new railroad bridge across the river, and paid Bonner County $1,500 to take their old railroad bridge off their hands. The county immediately began revamping the bridge to handle heavy load truck traffic to service trucks hauling logs to area mills. The one-way bridge had a ten-foot roadway, and was designed to hold a load of 250 tons.

Regular traffic still used the old wagon bridge, but in 1991 it was closed due to safety concerns and all traffic was diverted to the one-way former railroad bridge—which by 1999 had the lowest safety rating in the state. In 2002 the county finally secured funding to build a new vehicle bridge next to the existing former railroad bridge, which then became a pedestrian bridge. The original wagon bridge was torn down.

The pedestrian bridge is also part of the route of the Idaho Centennial Trail, a 900-mile long trek designated as the official state trail in 1990, connecting the state from north to south. Few have completed the entire journey.

Although many of the oldest bridges are rapidly being replaced, keep your eyes peeled when you’re out and about and take a close look at what is used when crossing the water. There’s history under your wheels.