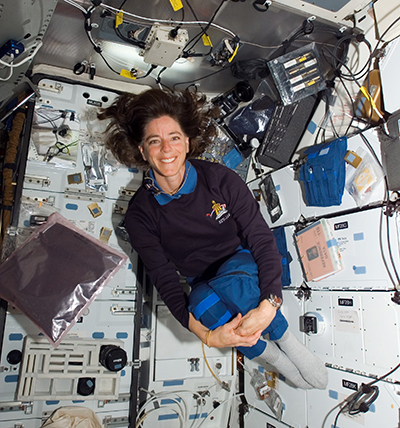 Idaho's Teacher in Space, Barbara Morgan, reflects on the Challenger disaster and her own journey into the stars

Teacher and Boise State University instructor Barbara Morgan couldn’t have dreamed a career in education would take her out of this world. But that’s exactly where she found herself in 2007, during a mission to the International Space Station.

An elementary school teacher in McCall during the 1980s, Morgan was selected by NASA to train as a back-up Teacher in Space candidate for the Challenger mission in 1986. When that mission ended in disaster and claimed the lives of its crew, including teacher Christa McAuliffe, Morgan continued to work with NASA as the Teacher in Space Designee. In 1998 she became a Mission Specialist with NASA. Just over two decades later, they achieved the mission first laid down by President Ronald Reagan to put a teacher in outer space when she flew aboard the shuttle Endeavour to the International Space Station, spending 12 days, 17 hours, 55 minutes and 34 seconds in space.

Although semi-retired, Morgan still works hard to educate and inspire students. In the spring of 2019 she visited Priest River Elementary School—with a message to students to work hard toward big dreams—as the culmination of teacher Chris Naccarato’s year-long, space-themed curriculum through the National Astronauts in the Classroom Association. She was the 45th astronaut to visit there since Naccarato began the program in 1993. Later, she talked with Sandpoint Magazine about her own journey chasing a feat few have achieved: leaving Planet Earth. 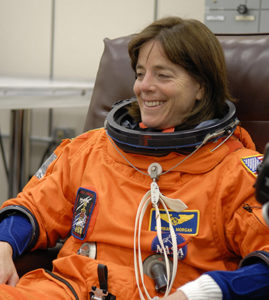 Q: What was it that first attracted you to the idea of space travel? Was there any single moment you recognize as inspiring that ambition?

A: Actually no. Sorry to disappoint you! When I was growing up, I was very, very interested in space and the stars and the planets and astronomy. As a Girl Scout, I spent a lot of time looking up and out and was fascinated by that. A lot of astronauts will tell you it was Neil Armstrong stepping on the moon. I had just graduated from high school, and I definitely watched Apollo 11 and the build up to that. But as a girl growing up in that time frame, it’s just not what girls did. Girls became teachers, moms, nurses, secretaries. So it never occurred to me that was something I would do.

Q: The Challenger disaster was a national tragedy, and as someone who trained with Christa McAuliffe, you had a very personal connection to it. What was your reaction to that moment? Did it sow any doubt about your own dreams of space?

Afterward, NASA asked if I wanted to continue on and step into Christa’s shoes. This was on national TV, and we had children around the country watching adults in that horrible, horrible tragedy. As a teacher, I know kids learn first and foremost by doing, and then by watching … and I felt it was really important to see adults doing the right thing. And that meant finding out, for a start, what went wrong, and more importantly, fixing it and keeping the future open for our young people. So I had no trouble at all saying yes, I would continue on. Also, teachers had made a commitment to NASA, and NASA had made a commitment to the teaching profession. And I felt it was important to continue that.

Q: What was that next decade like? When NASA contacted you to resume training, did it come as a surprise, or was there regular communication between you and the agency?

A: I went back to McCall in the fall to continue teaching after I had completed both Christa and my schedules for what we’d be doing after Christa’s flight. I also continued working with NASA headquarters in the education division. In 1998, many years later, NASA asked me to apply to the astronaut office because they wanted to fully infuse education into the Astronaut Corps. In [its] 50 years of human space flight, NASA started with test pilots, and then they opened it up to engineers, and then to include women. In 1998, I was kind of the guinea pig. As a new requirement, in addition to having a science or a math or an engineering degree, you had to have experience in education.

Q: Tell me about the night before launching on a space flight mission. What goes through your mind in those moments? Do you sleep at all?

A: You sleep. You’re definitely ready to go. After all that training … and about a year before your mission is scheduled, your crew is assigned mission-specific training. All the simulations you do, you do with your particular crew mates and mission control teams. In our case, our job was to help construct the International Space Station. We spent a year [training], working specifically on those tasks. For this job, you spend a little more time in space, and you become a little more specialized in skills that are needed for the long haul.

And you are ready. You’re still going over procedures. You have briefings with ground control. There are all kinds of steps that the launch team is taking to make sure everything is ready to go.

Q: What were the feelings of your family as they prepared for this moment?

A: My family was always very supportive. They were excited about it, and I’m sure they had some nerves too. When we’re ready to launch, we’re ready to go. But I can tell we’re helping out with other crew launches … and you’re excited for your colleagues, but you’re also concerned.

Q: Launching must be a sensation like no other: having that amount of power driving you into outer space.

A: It’s the biggest push you’ve ever felt! It’s quite a ride. You’ve got three Gs on you, so you’re three times what you weigh on Earth. You’re really feeling that push, and there’s lots of thumping and shaking. Once you’re off the rocket boosters and just on the three main engines, then it’s a smooth, smooth, quiet ride. When you leave Earth, you’re accelerated until you reach 17,500 miles per hour. That’s five miles per second. That takes basically eight and a half minutes, and then you’re in space. So it’s a quick ride. Then when you … shut off the engines … even though you’re still traveling at a tremendous speed, you don’t feel it. And everything that’s not strapped down is floating.

Q: You tell how you would bond with International Space Station astronauts over gifts of food. Were there any other ways you were able to form connections across national lines?

A: The International Space Station is an amazing scientific laboratory and an incredible engineering feat. … to me, its most critical value is that it is international. We’ve got 16 nations around this planet that designed, built, worked on, and are working on this incredible scientific laboratory. Our partners are people we don’t always get along with here on Earth, right? So the way we’re able to set aside differences and work on something really, really challenging even when we have different engineering techniques, measurement standards, languages, and cultures is really critical.

One of my favorite stories, and it’s a sad one, is from early on when we were building the space station and I was serving in mission control. The date was September 11, and our mission control team was just about ready to get off shift. The flight director had his monitors on CNN … and we watched in shock as the planes flew into the twin towers. Here was this International Space Station with two Russians and one American, and we were a national facility, so we went into immediate shutdown. While we were working with the crew in orbit … the flight director got a call from the Russian mission control. They gave their very heartfelt condolences and expressed sorrow at what happened. They said, “Let us know what you would like us to do. Whatever comes next, we’re here to help.” My thought was that if we didn’t have this International Space Station—something we could work on together that’s extremely challenging for the good of the entire planet—I don’t think the Russian response to 9-11 would have been the same.

Q: Tell us a little about looking at Earth from the International Space Station.

A: You travel around the Earth in 90 minutes, so it’s 45 minutes of day, 45 minutes of night. All those beautiful pictures that you see of Earth where it’s shining and glowing and you see the clouds are all on the daytime side of the planet …It is absolutely pitch black, all the way down to the edge of the planet. And all that atmosphere we look at from our perspective on Earth that looks like it goes on forever? It’s like an eighth of an inch or a quarter of an inch. It’s like the skin on an apple. That’s a perspective I wish everyone could see. And that’s when you really understand we are all on this planet traveling through space. We are on spaceship Earth.

Q: What was the return journey like? Were you ready to leave?

The sad time was when it was time to come home, we made sure everything we needed on the shuttle was one the shuttle side, and everything the crew needed on the station was on the station side. So we’re on the shuttle side, and the crew staying was on the station side, and we said our goodbyes and closed the hatch. That was a really tough time because we weren’t going to undock until the next morning. And knowing you just spent two weeks working really hard together and knowing the door is closed. You can’t see them. The next day we undocked from the station, our orbits get very far apart. The we fire our engines, and that slows us down—just enough for gravity to pull you back down to Earth. You land 10 minutes later at the Kennedy Space Center. You have a pen floating, so you can watch as gravity starts to build. The pen just kind of drops to the floor, and you feel pretty heavy in your seat.

I was really proud of our team. We practiced re-entry and landing many times over a year, and our commander and pilot did a beautiful job landing the shuttle. I did not feel the main gear touch the ground. And then we were zooming down the runway, we let out the parachute to slow us down and then we come to a stop. Our CAPCOM welcomed us home, and he said something like, “Welcome home, you’ve given a whole new meaning to higher education.”