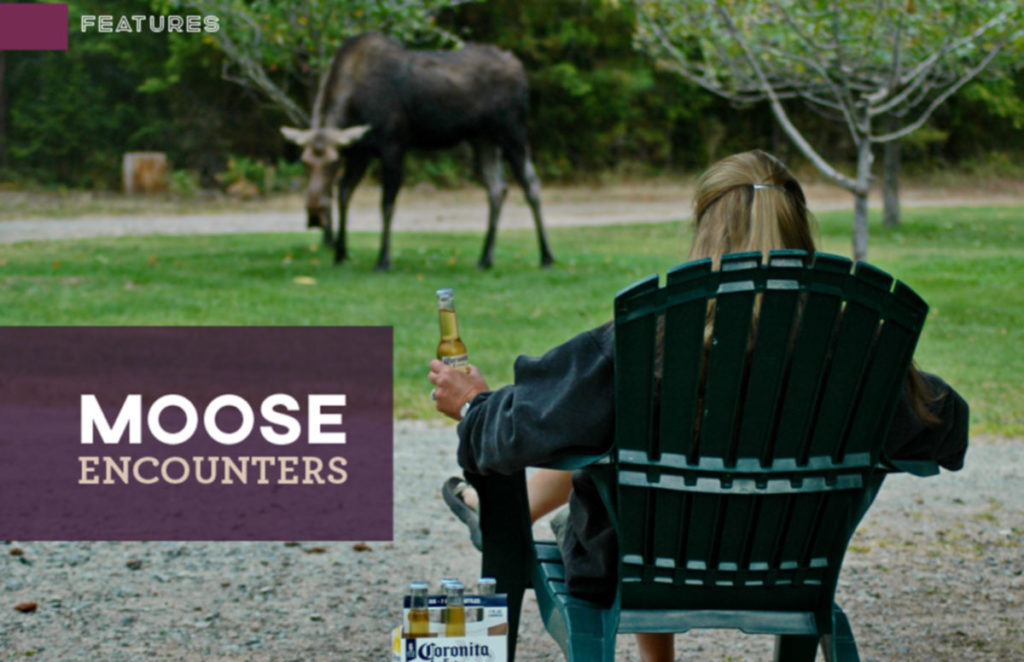 It’s quite likely that everyone with an operable camera or smartphone has a picture of a moose taken somewhere around Sandpoint. But when a moose moves in on a semi-permanent basis, the photo opportunities are endless. And if you happen to be a professional photographer … well, then, you might come up with something along the lines of an advertising campaign—much like Annie Pflueger did.

“A moose came into our lives one fall and made herself at home, drinking from the fish pond and feasting on our apple trees,” said Pflueger. “She decided to hang around for almost two weeks. Since she was a mainstay and reliable for photo opportunities, I decided to put a twist on the traditional Corona commercials featuring people relaxing on tropical beaches.” As you can see in the photo above, Pflueger’s creation was “Corona—Idaho Style.”

She added, “I have deep respect for wild animals and am well aware of their potential and do not take it lightly. I might appear relaxed in the chair, but I truly was anything but!”

Moose have the RIGHT-OF-WAY

It doesn’t matter who gets there first, it’s generally wise to always allow a moose the right-of-way. Just ask Carla Pennington Kirby. “A few years ago I was skiing Schweitzer, on Snow Ghost, and I was three-quarters of the way down the slope when I heard the oddest sound of horses galloping in my helmet. I shook it off and continued to ski toward a dense thicket of trees, when to my surprise a large moose came running at full speed, out of the trees, directly at me,” she said.

“In slowww motion, all four legs went horizontal in a grand attempt to stop before he hit me and in slowww motion, I did a hockey stop with my skies facing uphill, while I placed my poles pointing like a rifle to brace for the upcoming hit. The moose landed in front of me, with my poles hitting his chest (barely) and his head hanging over me like Bullwinkle. We were both spared as he shuffled his hooves backwards and headed down the hill.” 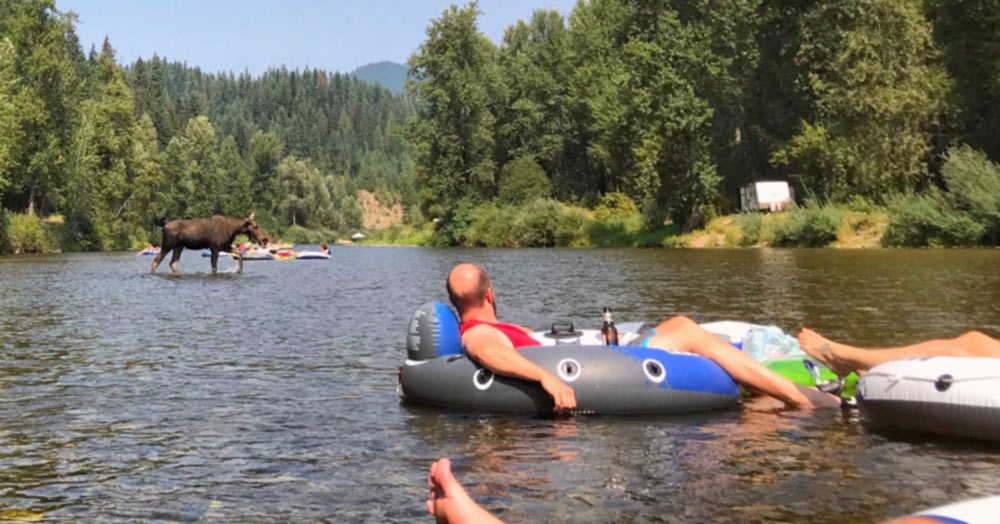 MOOSE in the water

Moose and water go together like… ham and eggs? Donny and Marie? Beer and baseball? You get the point. And if you have water on your property … or near it … you’ll get the moose, too.

Moose like water, and humans don’t deter them from enjoying it. They’ve been spotted frolicking in pools, playing in sprinklers and, as in this photo, making their way through an afternoon river float.

“My friends were celebrating their 5th wedding anniversary that weekend by camping and floating on the river they were married on,” said photographer Amber Phillips. ”We may have been a little surprised the moose joined us, but most of us are aware of the animals here so stayed calm and let her do her thing. The moose in this area are used to the folks floating and everyone respects them by giving them space. It was a great surprise on a fun weekend.” 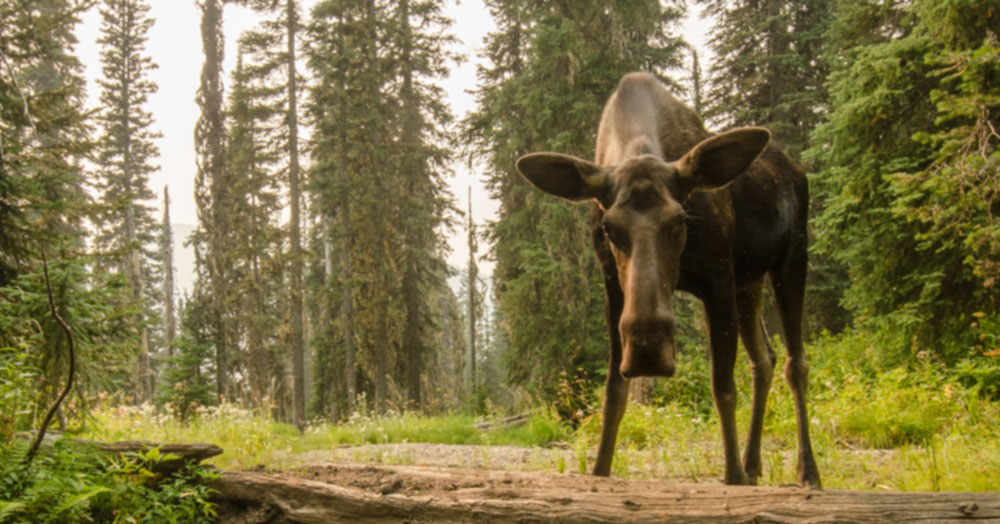 There are a number of things that can irritate a moose and cause it to attack. Primary triggers are a perceived threat to a young one and yapping dogs but frankly, there are moose that seem to be upset by the part in your hair. If you’re out and about and encounter a moose, these signs, according to Idaho Fish and Game warden Matt Haag, are your signal that Mr. (or Mrs.) Moose is not happy, and you should get out of its vicinity, as quickly and quietly as you can: head lowered; ears laid back; raised hair along the back of its neck; or stomping with its front hooves. If a moose charges you,

“ Find something to hide behind,” said Haag; “a car, a tree, or if all else fails, someone bigger than you. ” 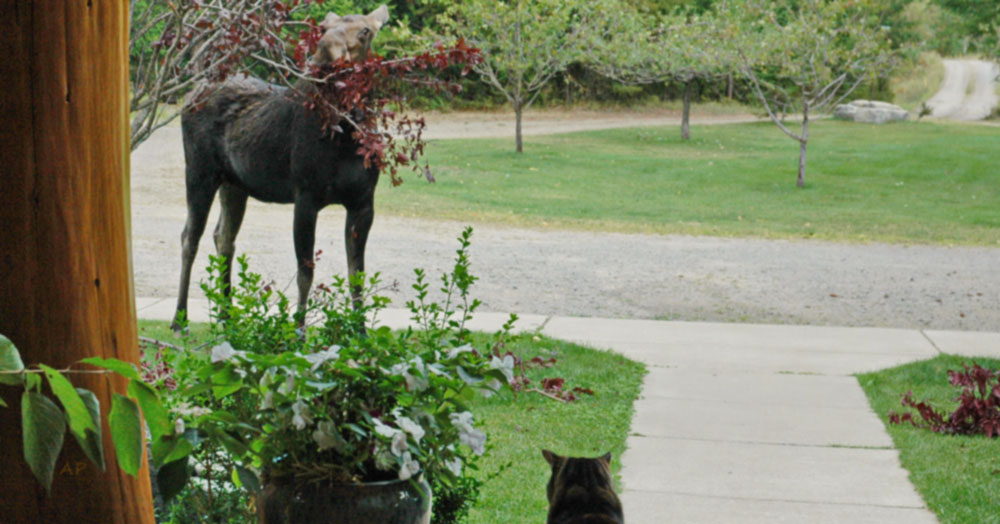 “I could rant at length,” said writer Cate Huisman about the moose that visit her south Sandpoint home. “I could tell you about the masses of beautiful pink and white tulips that used to come up every year in my garden (they were here before I was) and how now I’m lucky if I get a half dozen. Or about how my red osier dogwoods were once nicely and consistently shaped, and are now a random bunch of limbs of different lengths.”

The destruction of landscaping is a familiar theme when locals relate their stories of moose. “A mama moose and her baby liked to lay under the apple tree,” said Betty Cady of the regular moose visits to her home. “My neighbor [the late Gretchen Hellar, a former Sandpoint mayor] had an absolutely wonderful garden. That moose came in and ate everything growing. She loved it there!”

“Did I mention they also finished off two of the three blueberry bushes I planted?” Huisman added. “How they like cabbages even more than slugs like cabbages? How one of them landed on our garden gate during a lovers’ quarrel and bent it out of commission? (Our neighbors reported this one to us.)”

Moose love a garden anywhere, but they’ve obviously learned that the pickings are extra special on the south side of town, and head there for an all-you-can-eat buffet. 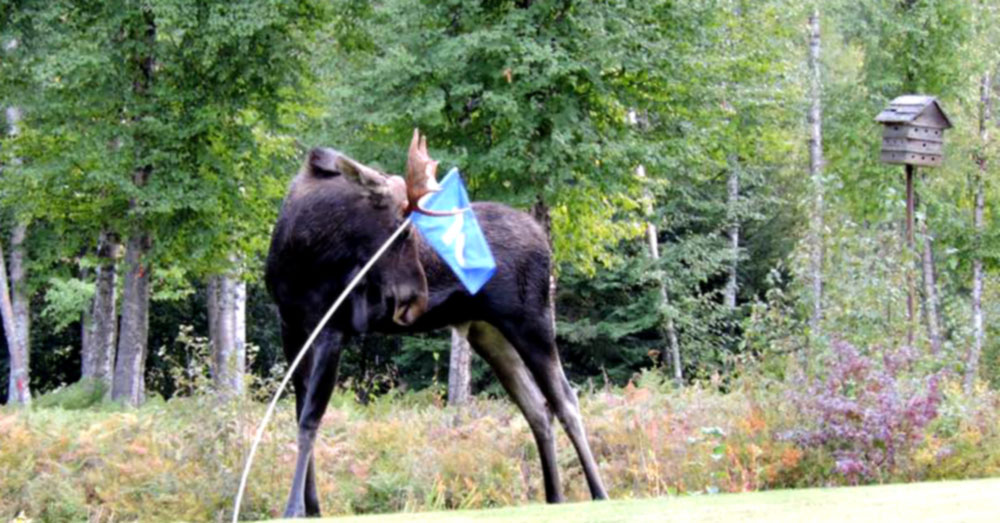 In the 1980s and ‘90s, when the Idaho Club golf resort on Highway 200 was still called Hidden Lakes, its tagline was “Where the moose are loose.” The course lies on the lower Pack River, where moose are plentiful, and they made (and make today) frequent appearances on the course itself.

Ron Perron was working at the course and tells of a time when he and his wife, Mary, were golfing. “I was on the 9th hole and putting for a birdie,” he said, “when Mary began fiercely whispering my name.” It was an important putt, and if you golf, you will understand that Ron was a little annoyed at the interruption. “What?!” he said in response, and she warned him to back slowly off the green. “A momma and two babies were walking up beside me,” he said. “I backed off very slow.” Is there a benefit to golfing with moose? “I gave myself a birdie for the hole,” Ron said. Automatic birdies were also given to golfers when a cow moose decided one day to give birth on the fairway near the 7th hole.

Others at the course remember, with fondness and quite a lot of laughter, another encounter between Perron and moose at the course. “I was driving down the fairway one morning when a mom and two calves came out of the river,” he said. The moose took exception to the moving golf cart. “I had to call on the radio to tell people I was out of commission for a while as I was being chased by a moose.” Moose are fast but, Perron assured us, golf carts are more maneuverable.

Newcomers to the course (undoubtedly newcomers to the area, as well) are thrilled about the moose populating the greens. One such newcomer shopping in the pro shop asked the late Jamie Packer, the club’s Canadian golf pro, “What time do you let the moose out?” Packer, never one to disappoint a customer, shouted the woman’s question over to Perron. “I told them I would go out and do it ‘right now,’” Perron said.