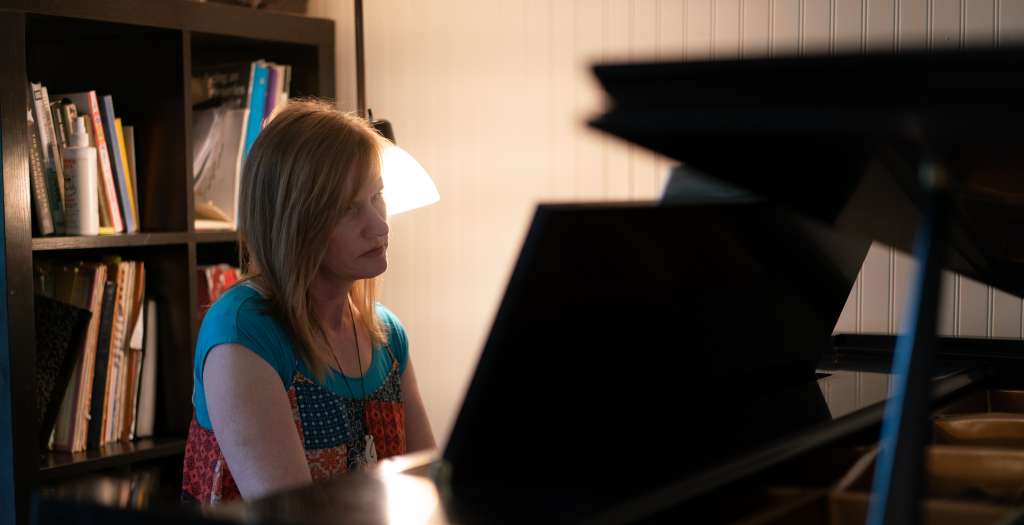 An interview with Apryll Walker, mother and manager of the Redhead Express, who reflects on a lifelong love of music

Just before Christmas of 2018, a video began circling on local Facebook pages featuring a stunning rendition of the classic Christmas song “God Rest Ye Merry Gentlemen.” While the video—vocals, music and even production values—was first rate, its local popularity was driven by its location: our very own Sandpoint, Idaho.

The group, Redhead Express, had performed at the county fair and Panida Theater, but for many locals the video was their first introduction to the band. So what was the connection to Sandpoint? The family, all but one daughter, now calls North Idaho home.

And the family’s matriarch, Apryll Walker isn’t just a regular mom—she’s a cool mom, who has gone from managing her own children’s musical career, to supporting the musical growth of local children.

The mother of seven homeschooled her children on the road for a large portion of their lives as the family started Redhead Express—fronted by her four daughters—and traveled the country opening for some of country music’s biggest stars. She’s gone from piano teacher to band manager and back again, and is settled now in Sandpoint as a piano instructor and children’s choir director at Bella Noté Music Studios. 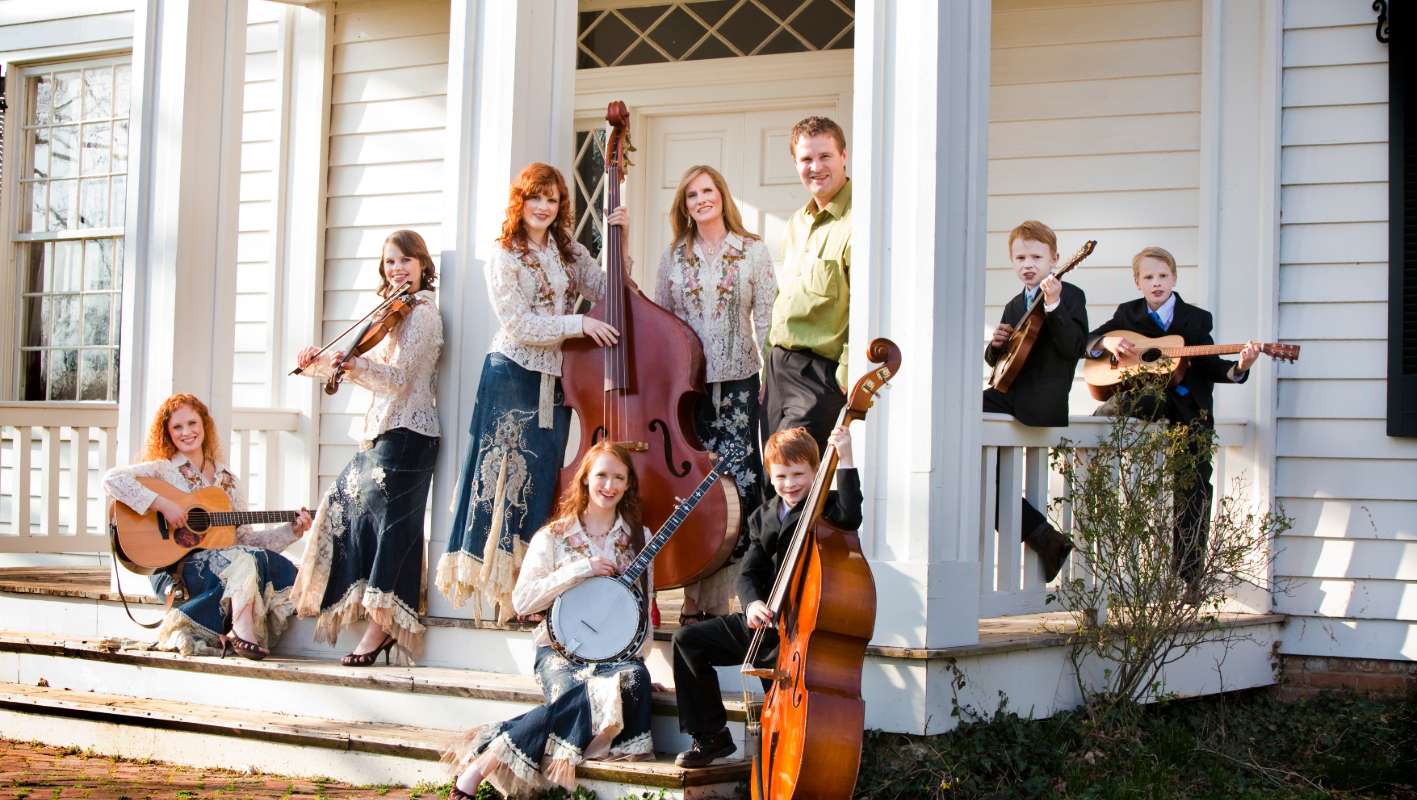 With Redhead Express retired as of October and her new focus on teaching Sandpoint’s next generation of performers, Walker sat down with Sandpoint Magazine to reflect on where this musical life has taken her and her family.

Sandpoint Magazine: I hear you were number nine out of 10 kids growing up? I’m wondering what that was like.

Apryll Walker: I had six older brothers, so that says a lot right there. I was a tomboy, I loved to be outside, I loved short hair, I loved to be barefoot. I was kind of tough. I was a nice kid, but I didn’t let anybody push me around. My sisters were on either side of me, so the [youngest children] were three girls, and I had one older sister. It was loud. It was busy. It was fun. My whole life, I’ve always liked having a lot of people around me, people in my home, just because I’m used to lots of noise.

SM: Speaking of noise, it sounds like you guys were pretty musical.

AW: Yeah. My dad had a beautiful baritone voice and he was always the one who would be chosen to play the part of Jesus in the Easter cantata because you could hear—like, if you went to church with us—you could hear him over the whole congregation … And my mom played the organ. She couldn’t sing, couldn’t carry a tune for some reason, but she loved music, so all 10 kids played the piano, all 10 kids could sing, all 10 kids learned to play a band instrument, and the girls all learned to play the violin. She wanted to have a band, but she couldn’t get us to gel, to make it work—there was just too much going on.

SM: Tell me about the family band you ended up creating with your kids.

AW: We were living in Alaska and I was substitute teaching music classes in the schools. I was teaching my kids piano, and then when my oldest was nine or 10 we started teaching them how to sing, teaching them two-part harmony. My oldest daughter wanted a guitar, so we bought her one at a yard sale. The next one wanted a banjo. Little by little, we started gathering these instruments, and they loved music as much as I did, so I said, “Why don’t we do something with this?” We started performing at farmers’ markets and at the nursing homes and just anywhere anybody would let us play. In the beginning it was me playing the keyboard and the girls would play three-part harmony on their violins, they would sing. People liked it, so we just kept doing it. We had just built our dream home there in Alaska. We cleared the land, the whole family built the house. We moved in in May and we had our big open house and all our musician friends came over. But then three months later we decided we wanted to go and study music. We had a big family meeting and everybody felt like that was what we needed to do, so we sold everything and bought an RV and went out to the Appalachian and Ozark Mountains and started going to jam sessions and learning from the old-timers. 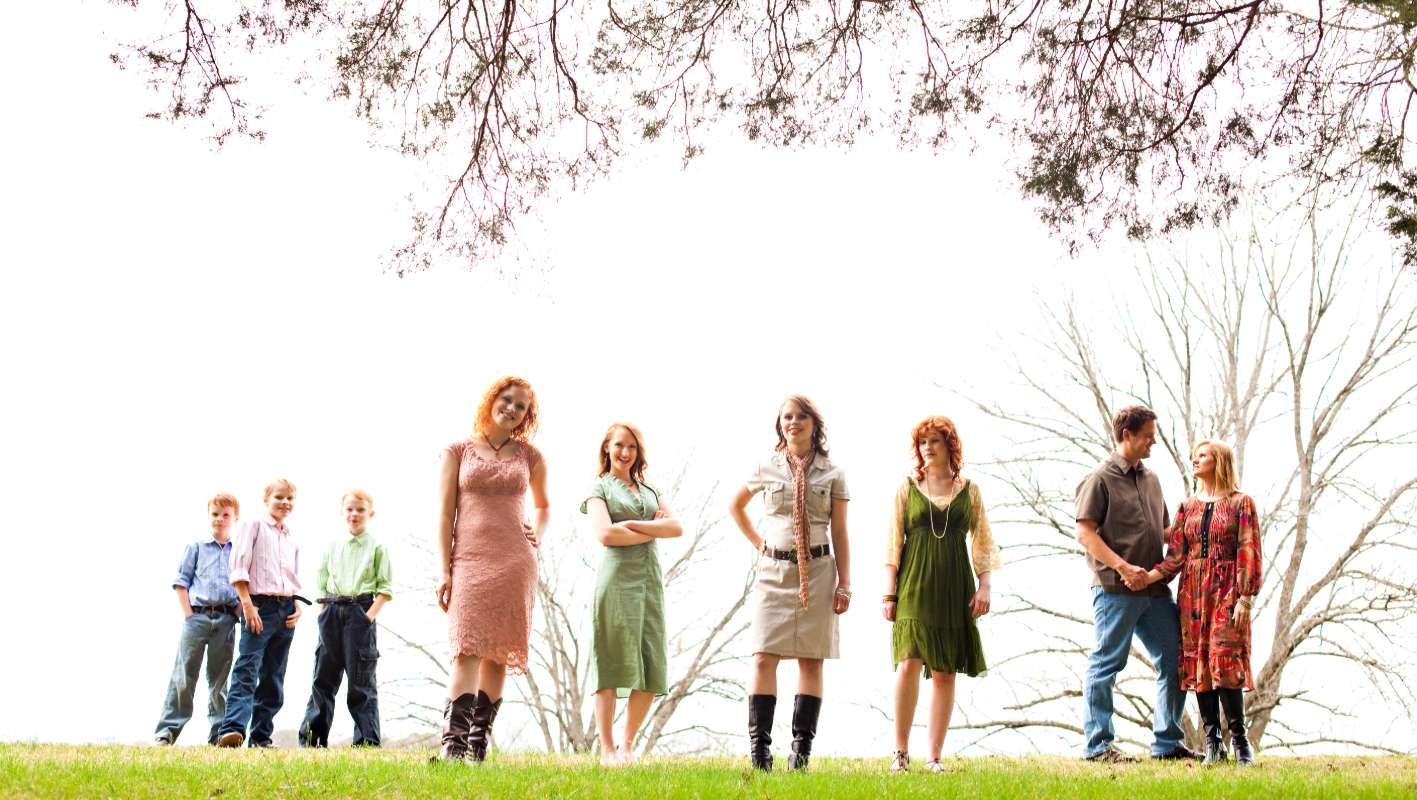 Bret and Apryll Walker on right with family circa 2009 in Nashville. Courtesy Photo

SM: Wow. What a life change.

AW: Yeah, it was a big change, but it was a great way to raise a family. We had so much fun and made lots of great memories. We homeschooled, so it made our education more interesting. We would go to maybe a dinosaur dig or a science museum—you know, just wherever we were we would try to take advantage of that area and study history or science or whatever. We ended up getting a job in Branson, Missouri. Branson is the epicenter of live music and live theater. They have probably 150 shows in a week. There are so many theaters there. We didn’t know what we were doing, so we had to quickly figure out how to put on a show, how to entertain, how to use sound equipment, how to move on a stage. We called that our college education—a crash course in how to put on a show. It was hard. It was a lot of work. So my kids learned how to work hard in Branson, and they learned how to entertain, but after two years of that we [knew] we were going to burn out so fast, so we moved to Nashville. We taught our kids that you can go to college, you can sit in class, or you can just dive into life and start looking for the people who are experts in whatever that field is that you’re interested in.

SM: How did you all get to Sandpoint?

AW: I would say it was God that led us. A lot of people say that, but my husband and I have always been drawn to the north. When we first got married we were living in Boise … and we wanted to take a vacation and we both said, “Let’s just go north.” We ended up in Victoria, British Columbia, and that was beautiful, and then we ended up moving to Alaska and raised our kids there. Then we lived in Missouri and Nashville for a long time because middle America is a good place to tour from. But I don’t feel like we fit in the south. We were a little bit frustrated with the music industry. Things have changed a lot and they’ve changed fast. When we felt like it was time to leave Nashville, we all decided [to] go back to the Northwest. We couldn’t go back to Alaska because you can’t tour from Alaska. We had driven through here two or three times … and we just felt drawn to this area. It’s beautiful. It has the mountains and the trees that we love. One day we just felt like, you know what, this is where we’re supposed to be. We drove across that bridge and we felt like we’re home. We love it here.

SM: It sounds like music has been a part of your life since you were a kid. Where all has that taken you? What has music done for you in your life?

AW: It’s given me work—when I was 17 I started teaching private piano lessons, and I’ve taught off and on ever since then. It’s brought me a lot of joy because there is nothing I enjoy more than listening to or playing music. That’s my getaway. Some people read a book, some people watch a movie—I sit down and play the piano. It has been a way to raise our children in a good, healthy environment. Some people move onto a farm and they raise animals, and I always tell people, “We just raise instruments instead.” It was a great 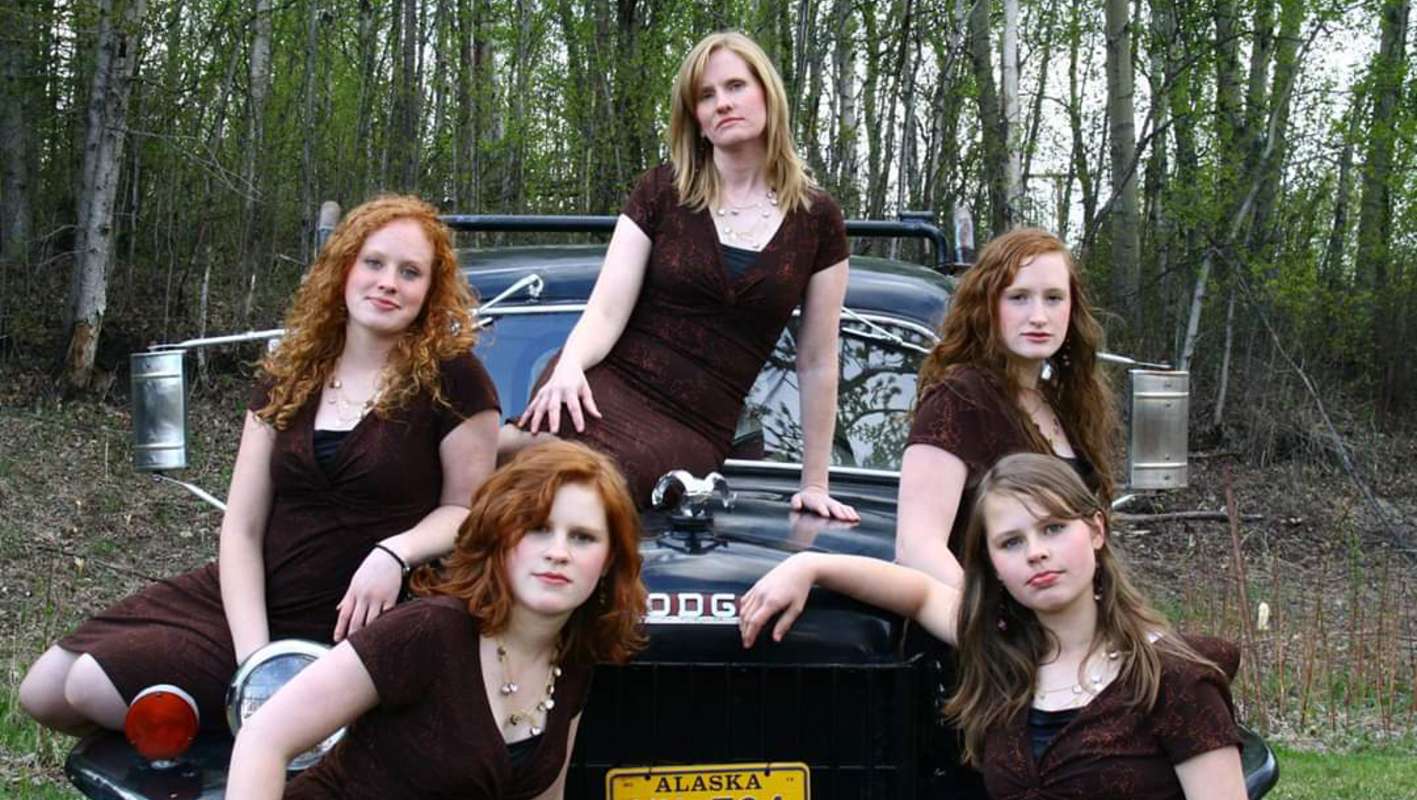 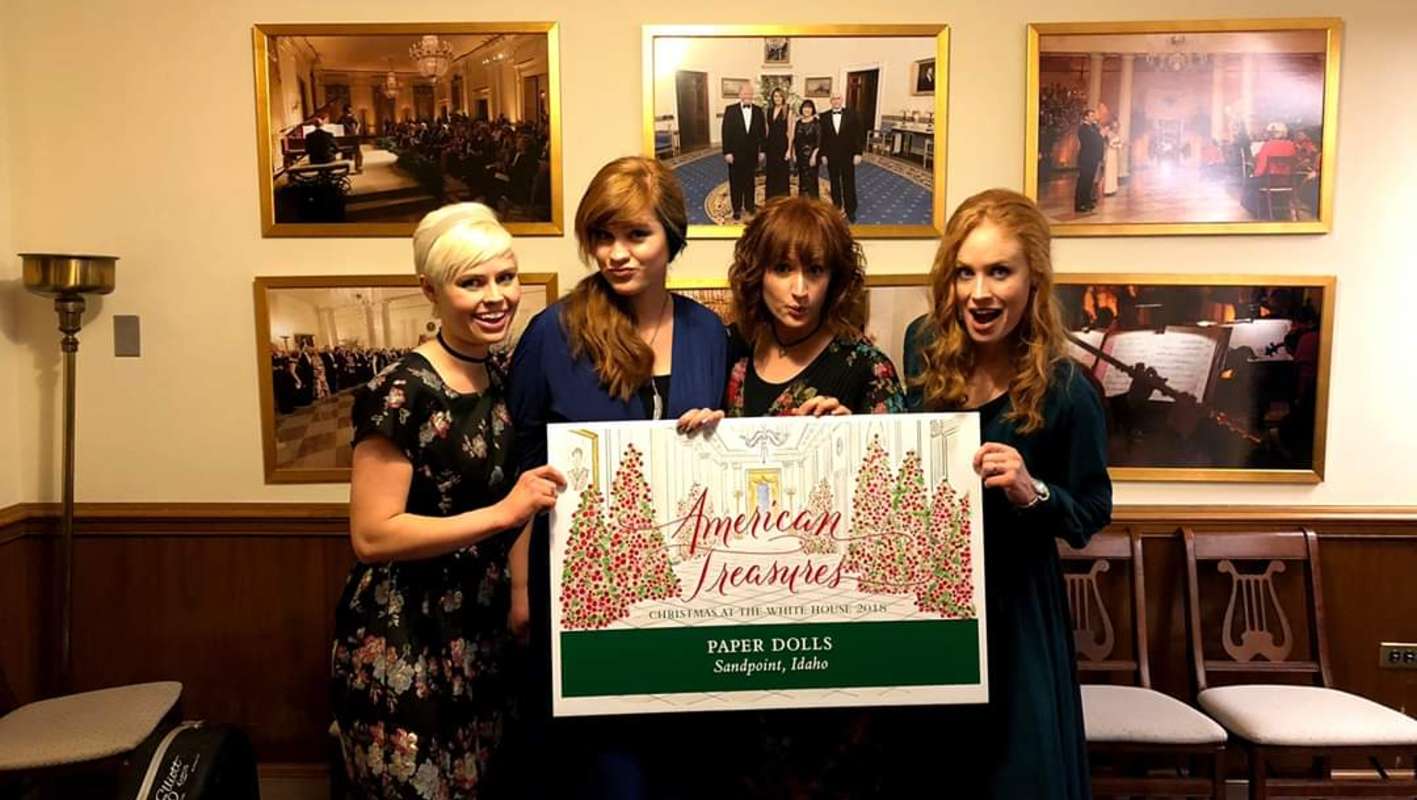 way to keep our family close. It’s not for everybody, that’s for sure, because you have to divorce yourself from normal life. The kids don’t grow up with kids in the schools and they don’t have extracurricular activities. Their social life is different. They learned how to make friends really fast. And they did—they made friends all over the country. As far as the band [Redhead Express], they’ve had some great opportunities. They got into the performing arts circuit, the fair and festival circuit. They were able to open for Charlie Daniels, Collin Raye, Clint Black, Parmalee, Diamond Rio. Even Styx—they sang the national anthem for Styx, for Martina McBride, for Trace Atkins. They’ve had a lot of fun experiences meeting people, opening for people. [Redhead Express retired in October, as two of Walker’s daughters—Kendra and Alisa—are now focusing on raising families of their own. Daughters LaRae and Meghan have joined forces with brothers Sean and Ammon to create a new band in Sandpoint: VybeSlyce. Their mother said the group has a folk pop sound.]

SM: What is it you do at Bella Noté and why do you enjoy it?

AW: I just started teaching here in January. Originally I was just going to do the children’s choir, and that’s been fun. I’ve always enjoyed leading some kind of a group. It was the band for 12 years. So when the studio heard we were settling down [in Sandpoint] they asked if I’d like to pick up their children’s choir. I’ve really enjoyed that. I love working with kids. And teaching piano—I started teaching piano also, here, in January. That’s my first love, is the piano. It’s fun to get my chops up again because I actually put piano on hold for a good 10 years. I didn’t even own a piano while touring. So it’s been fun to get back into that again … and pass it on to the next generation.