Hiking Along the Selkirk Crest 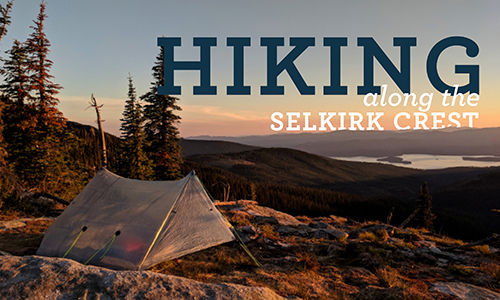 Adventures often start with just a few words. “I wonder if you could hike from Mt Baldy to Parker Peak along the Selkirk Crest?” I commented to nobody. That my wife, Jill, barely raised an eyebrow gave me just enough of a nudge to give it a shot, making the hike in several stages.

With smoke-free skies and a ten-day weather window, I took off from the Mickinnick trailhead up and over Baldy to Schweitzer. While bushy, a fairly developed game trail allowed me to finish the 16 miles in time to catch the chairlift at Schweitzer down from the top, and sleep in my own bed.

The next morning, my twin daughters and I caught the chairlift back up to the top and headed for Keokee Peak and the Caribou Hut, where we would spend the night. The terrain flopped between tight baby trees and pig-sized boulder fields. We took turns leading and joked that there were no wrong turns as there was no trail. We laughed that night in our sleeping bags, realizing that how raw our shins were from bushy meandering was a mark of how far we were definitely off trail!

In the morning, my guest hikers left and I took off for Mount Casey and points north by myself. My goal was just north of Jeru Peak, where Jill would join me the following morning.  The south faces were generally grassy and fast, while the north sides were challenging and slow. Soon, I was in the Sundance burn zone and the terrain changed completely.  At the top of Jeru a burned down lookout tower was all that remained. The concrete pilings were just big enough to sit down on. The views north were a teaser for what was ahead.

The section between Jeru Peak and the Harrison Lake trailhead seemed like the heart of the adventure. It felt the most remote, had amazing views of both Pend Oreille and Priest Lake, and was bursting with streams, small ponds, and emerald lakes. 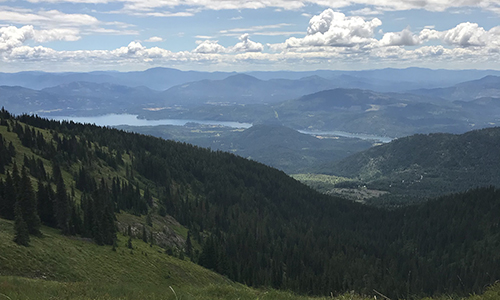 The trail traversed above massive granite walls and provided views of almost all of the route from Schweitzer to Parker Peak. Of the 16 named peaks along the route, seven would be summited in just three days. Throw in the numerous surprise appearances of Chimney Rock and it’s no wonder we were constantly uttering, “This is unreal.”  After hiking up and over Gunsight Peak, we made camp on a rolling granite ridge overlooking Priest Lake.

The next day gave us wonderful views from the top of Mount Roothaan and the grassy, granite-filled meadows surrounding Chimney Rock were invigorating. But leaving the Chimney Rock trail and traversing to Silver Dollar diminished our excitement as the hiking became slow and tedious. After finally getting to the top, I could see a small pond below the peak that would be our night’s camp spot. The scramble down was slow but safe. The water was barely knee deep in that pond but a clean body sure does sleep better! 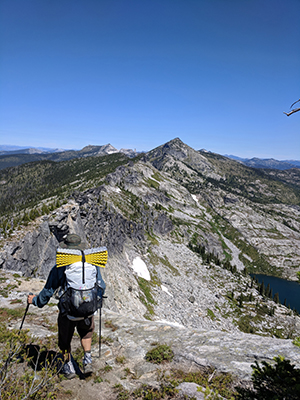 Leaving the shadow of Silver Dollar Peak was easy going and before we knew it, Jill was summiting the South Twin. With a slow steady pace, we moved on, gaining the North Twin and the familiar views of Beehive Lake and Harrison Peak. Eventually reaching the Harrison Lake trail, we began our descent to the car for a few days’ rest at home.

The plan from that point was for the whole family to join me in summiting Harrison Peak, then I would head north alone for the remainder of the hike. The stay at the top was brief as I was eager to head north into zones I knew very little about.

I scrambled down the back of Harrison Peak into the bowl of Two Mouth Lake. A pretty good bushwhack with marginal views and a steady squadron of bugs had me second guessing my route choice. I made it to the upper lake and got in a swim. Hiking the Two Mouth Lake trail was short and sweet, as leaving the trail meant grabbing a handful of branches and pulling myself uphill. Slowly, I made it out of the jungle, well-scraped up, but happy to be back up high where the granite ridges provide a much better walking surface.

The big challenge that remained was climbing Myrtle Peak. If I could get close to the base and make camp then I could get an early start in the morning. I passed some nice granite slabs and some decent grassy spots, but I kept looking as I still had energy to walk. And then I came upon the most massive granite dome I have ever seen. It was full of cairns and rock mosaics. It even had a granite rock bench someone had made with views of Harrison Peak.

After a good night’s sleep, I got an early start on Myrtle Peak. The climbing was hard, but I was in the shade and had lots of energy. The ridgetop hiking connecting Myrtle Peak to Ball Lake was an elk highway. It was the most enjoyable off-trail cruising yet, and the front row view of The Lion’s Head inspired thoughts of future off-trail adventures. Before long, I was looking down on Ball Lake and imagining how great the swim would feel.

Getting back on trail was a relief and the views above Pyramid Pass breathtaking. Long Lake, with its massive granite apron, would be my destination and my last night of the trek.

Only one day remained on my adventure and I was ready to finish it off. The 16 miles out would include a detour up Parker Peak. The ridgetop trail was smooth and I was slowly getting closer to my goal. The last few miles were a trudge, though; the views were not so great. I was ready to be done.

I reached the Parker Peak trailhead and climbed down to Parker Creek, took off my shoes, and soaked my feet. Jill showed up in the car with a cooler of Izzies in the back. My trek of roughly a hundred miles, over 16 peaks, and 29,000 vertical feet was over. My adventure ended much as it had begun, with just a few words: “That was fun.” 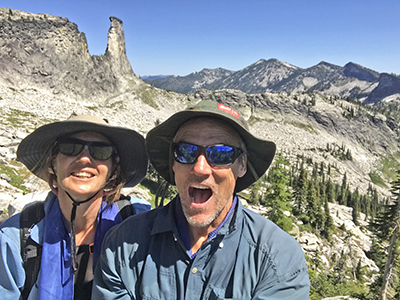 2 responses to “Hiking Along the Selkirk Crest”