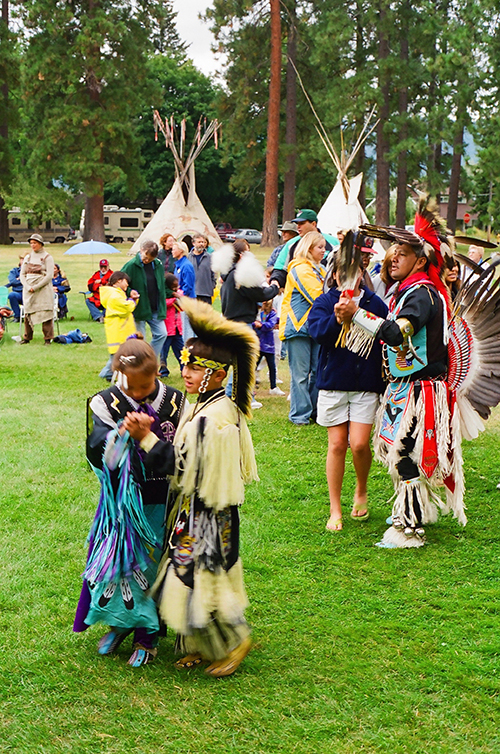 To descendants of the original inhabitants of Idaho, stories are history, and tribal elders who know them are a resource without peer. The stories reveal how humans are to live in balance with the natural world, with a reverence for other creatures on the Earth and a responsibility to protect them. This balance is not an option or an environmental ideal; it is a necessity. Anna Armstrong, current director of education for the Kalispel Tribe of Indians, sums up the import:  “Preserving our stories is how we’re going to keep alive who we are.”

For nearly 30 years, the Idaho Mythweaver has been helping to make sure these stories are not lost.

The Mythweaver was born in 1989, when Sandpoint resident Jane Fritz pitched an idea to preserve Native stories to a group of tribal leaders at Idaho’s centennial celebration. Within an hour, she had received their unanimous support, so she formed a board, applied for (and received) a grant, and launched the organization’s initial, three-part project.

The first part, Idaho Keepers of the Earth, involved making five, half-hour radio documentaries on the five tribes recognized in Idaho at the time: the Nez Perce, Coeur d’Alene, Kootenai, Shoshone-Bannock, and Shoshone-Paiute. “Each of the half hour [programs] had a traditional story or legend that we built all of the voices around,” recalls Fritz, who interviewed tribal members for the programs.

The next step was to give contemporary Idahoans an opportunity to hear the storytellers in person. For this purpose, seven elders from the five tribes traveled to 14 cities around the state in a tour called Speaking the Earth Mother. From tiny Kamiah to some of the biggest cities in the Treasure Valley, they told their stories in libraries, schools, and churches. Some of the elders were concerned that no one would want to hear their stories, but the halls filled.

A third aspect of the project brought 60 teachers to Coeur d’Alene for a workshop in environmental education. The lead instructor was Mari Watters, a legendary Nez Perce storyteller who Fritz calls “one of the most remarkable teachers I ever encountered.” 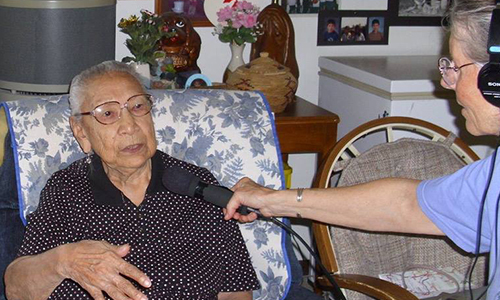 With the success of these initial programs, the Mythweaver continued to bring the stories and cultures of Idaho’s tribes to a wider audience. Native youth were trained in radio production so they could create their own audio works for both mainstream and Native American media. One notable student, Brian Bull, is a Nez Perce now frequently heard on National Public Radio, reporting from station KLCC in Eugene, Oregon. Of particular interest to those in Sandpoint, a program about life around Lake Pend Oreille, narrated by Kalispel tribal leader Francis Cullooyah, was included in an award-winning series of five features for regional public radio.

As the turn of the millennium approached, the Mythweaver sponsored a return of Kalispel people to visit their ancestral fishing and gathering area at the mouth of the Clark Fork River. The following summer, a second gathering included members of several other tribes who had also used the area, and a powwow and salmon feast were later held at Sandpoint. Perhaps it was only coincidence that in that same year, the state of Idaho decided to recognize the Kalispel as the sixth official Idaho tribe.

In the past several years, a series of visits by Kalispel culture teachers to elementary schools in Sandpoint and Priest River have given fourth-graders a chance to immerse themselves in Kalispel culture over several months time. Students tasted samples of traditional food and saw different types of clothing; they played Kalispel games and danced to Kalispel drum songs; and then the students created their own cultural displays to present to the Kalispel upon a second visit. Another project of the past three years has been the Native Heritage film series at the local library, which has included films about tribes all over the country.

The Mythweaver’s current work—Native Voices Preservation Project—goes back to its roots: In the years since the organization’s inception, its original tapes of Native stories have aged and become fragile. Many of the elders Fritz interviewed are no longer alive, and the current board feels an urgency to preserve their voices. So they decided in January of 2017 that their top priority would be to digitize their tape archive. As Fritz explains, “When you produce a radio story, you may choose 30 seconds of an hour-long interview.” While the radio programs have already been preserved, there is much more material on the original tapes.

The Mythweaver hopes to preserve all they can of more than 100 tapes in its collection. The digitized recordings will be stored in several museum archives, and copies will be given to the speakers’ tribes and descendants. “Imagine Nez Perce youth hearing the voices of ancestors they never knew, listening to their wisdom, teachings, and stories about how my people lived in harmony with all things. We can all learn from them,” said Diane Mallickan, a Nez Perce who is currently the organization’s president.

So the Mythweaver has come full circle. As making those first recordings was Fritz’s first project with the organization, saving them will be her last. When this project is finished, she will retire to her cozy yurt at the edge of town. 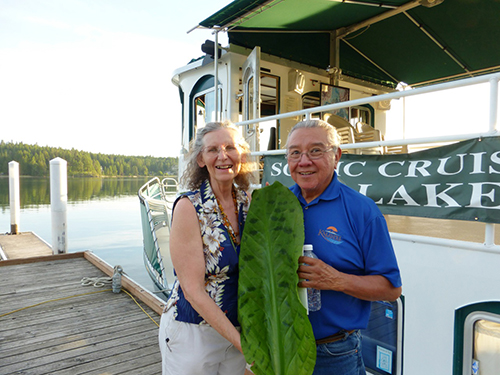