Ice arenas grow ever closer in both Sandpoint and Ponderay 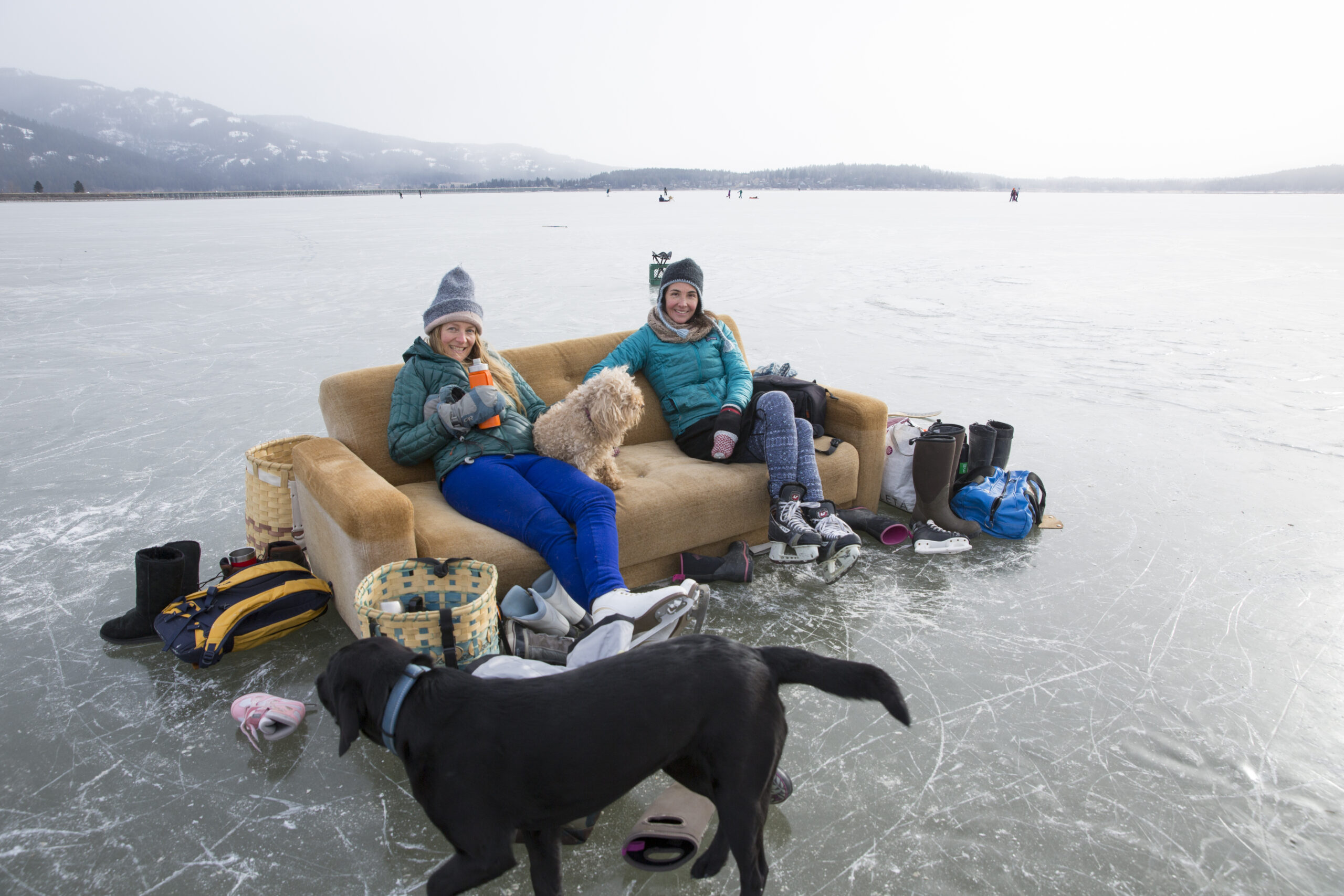 Her favorite memories of her father involve ice skating on the pond near her Wisconsin home more than 40 years ago, said Iris Harrison, who carried her love of skating to Sandpoint in 1996.

Harrison keeps those feelings of gliding across the ice alive every time the ice freezes over enough to skate; times fewer and farther between in the past few years due to exceedingly unpredictable weather.

When the weather is just right, said Harrison, she and her family head out to where 100 to 150 people might gather—the slough west of Travers Park or off Third Street Pier—playing pickup hockey, free skating, or even scooting across the ice in a chair.

“Of course, when you’re skating outside, it’s fleeting,” said Harrison, who knows that skating on a frozen body of water requires vigilance, especially where cleared snow has accumulated and possibly melted, weakening the ice.

“You don’t realize how much ice is flexible,” she said, and was especially excited to hear about a group trying to pull together an enclosed community rink.

“To me, the treasure of a rink here in town is something for the kids to do after school, in the winter, in the dark,” she said. An enclosed rink would expand the skating season, as outdoor skating in the area is generally limited to just one or two months a year.

“Regardless of where you grow up, sports are part of the American way,” said Pierce, who founded the Sandpoint Hockey Association and is an avid outdoorsman.

“But if you live in an area where the weather prevents outside sports year-round, then you don’t realize the importance of creating those all-weather sports opportunities,” said Pierce, who grew up in Moscow, and has lived in Sandpoint 30 years.

A rink would provide healthy, constructive activities for children after school, he added, especially for kids and their families through the five to six months of gray skies, rain, and slush typical of a Northwest winter and early spring.

Kids and families aren’t the only beneficiaries, said Pierce, whose day job is tending to dogs, cats, and whatever critters people bring into North Idaho Animal Hospital.

A community rink is good for businesses, which is good for the community as a whole, he said, noting that Sandpoint Ice did extensive data-gathering over the years to develop their model.

Boundary County’s ice arena, which is located at the county fairgrounds, is run by the city’s parks and recreation department. Frontier Ice Arena in Coeur d’Alene, which offers public sessions on Tuesdays, is a nonprofit run by Kootenai Youth Recreation Organization, which took over and enclosed the former open-air facility, and is packed with activities from broomball to figure skating to skate parties. Coeur d’Alene on Ice, meanwhile, worked with the city’s Parks and Rec department to build an open-air rink in McEuen Park. And Spokane, Washington has two facilities: the Eagles Ice Arena—home of the Spokane Braves junior hockey league—and the Numerica ice “ribbon” in Riverfront Park.

People in the region, it seems, are eager to put blade to ice. 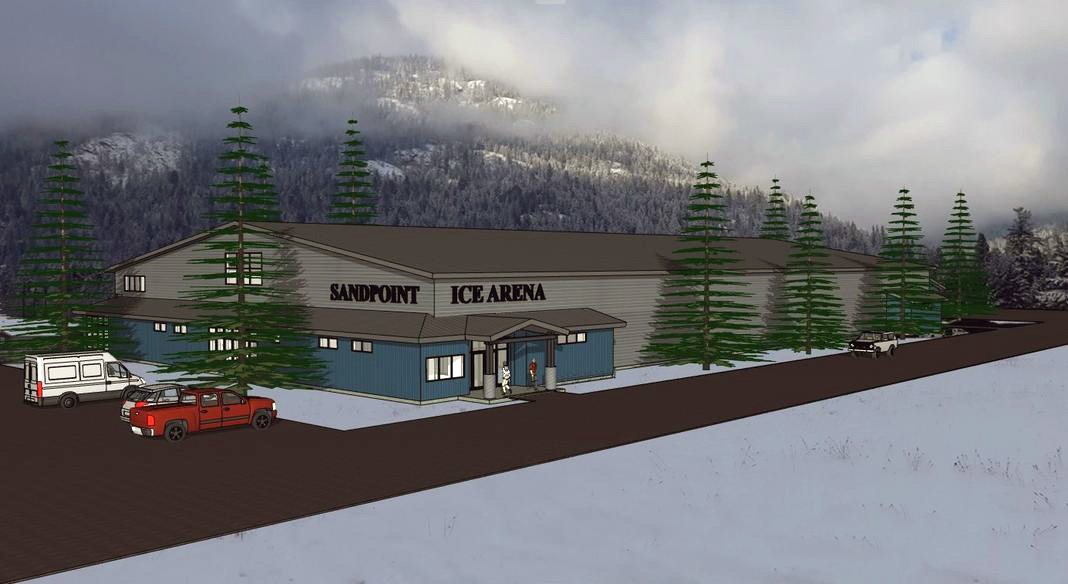 Rendering of a possible ice rink to be built at the fairgrounds.

Having a dedicated and well-maintained space means being able to host events. That, said Pierce, filters out into the community, and complements existing entities, such as Schweitzer Mountain Resort.

Pierce is probably the most visible face of a group trying for nearly 20 years to build a community rink, which involves three phases: securing a location, raising the necessary funds to construct the facility, and building the facility.

The group, which recently launched www.SandpointIce.org and has set up office space in the new EnvisionCenter, has secured a home for the rink: the Bonner County Fairgrounds.
“We have full support from all three Commissioners and see the value an ice rink will have for our community, both for young and old alike along with the economic shot in the arm it will bring,” said Dan McDonald, Bonner County Commissioner for District 3. A memorandum of understanding between the group and the county commissioners, which projects a rink built at the fairgrounds, was passed in the fall.

With a site, said Pierce, they can address the cost of building such a facility, which will rely partially on donations and sponsors, two of which are already on board—literally. Schweitzer CEO Tom Chasse and Washington Trust Bank’s Eric Paull serve on the Sandpoint Ice board. Jim Zuberbuhler, associate vice president and financial advisor with D.A. Davidson, and CEO of Kaniksu Land Trust, will spearhead fundraising.

A super-cool ice arena isn’t cheap. Pierce estimates that to get kids on the ice as quickly as possible, they’d need $4 million to fund such things as the ice plant itself, finishing the fairgrounds building, and creating a warm area for people to put on and take off skates. Double that amount will make the place more amenable, including locker rooms, spectator stands, and concessions. 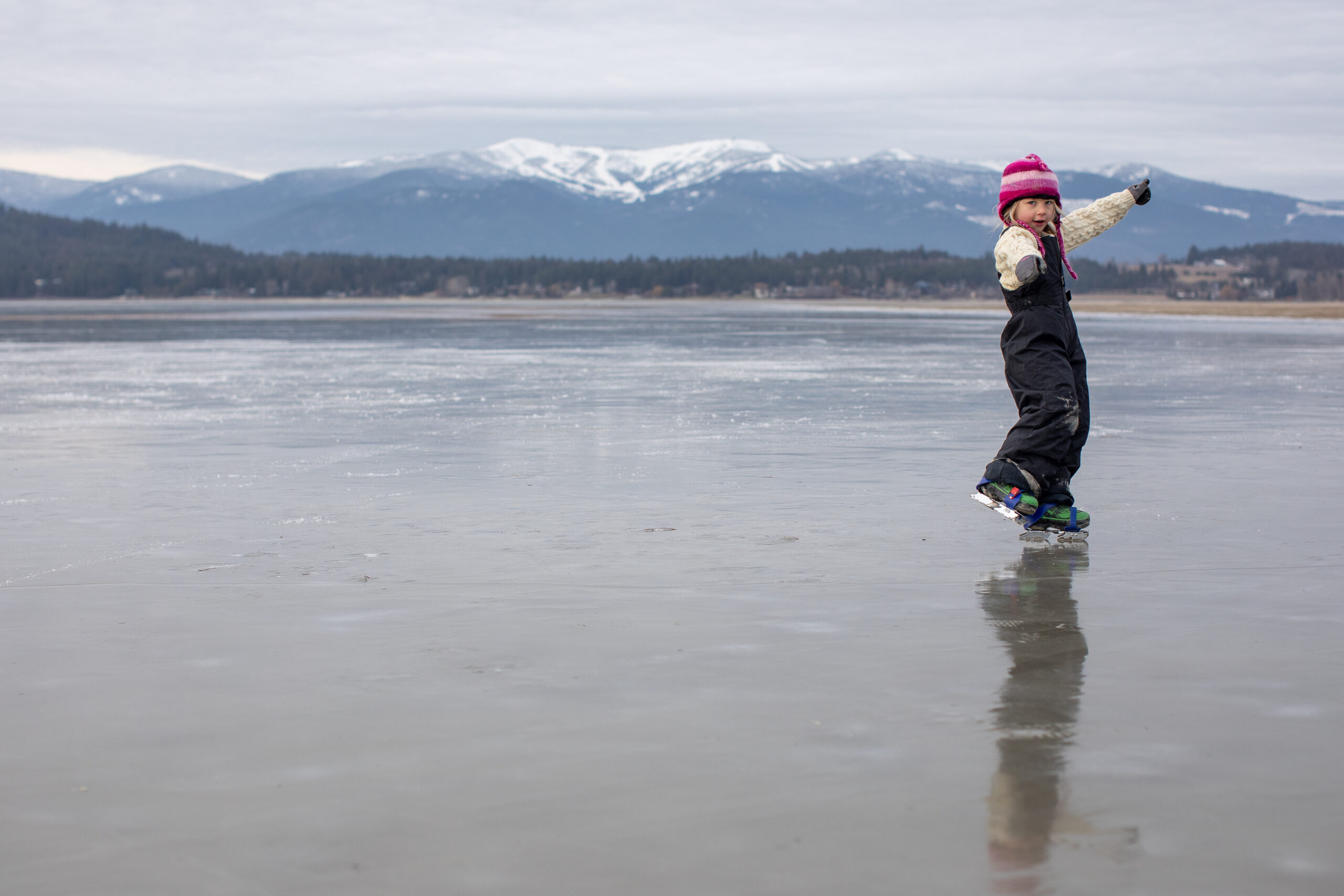 A budding young skater on the ice. Photo By Fiona Hicks.

“Our goal is not to leave any kid out, and money should not be a barrier,” said Pierce. “As I tell people, we need to do ‘well’ before we can do ‘good,’ meaning, we need to structure a successful business model to ensure we can pay a decent wage to the employees, keep equipment clean and functional, and set aside money for repairs and maintenance.”

Financial support may even come from the city, as the fairgrounds is located within city limits.

Pierce is so passionate about the project, he’s stepped away from his veterinary practice to focus on the rink.

“I promise that in five years, nobody will understand how we ever lived without a community ice facility.”

Ponderay resident Tim Wilson, a supporter of Sandpoint on Ice, is putting time in to see an ice rink—albeit an outdoor one—in the area even sooner. His proposal this fall to the city of Ponderay for an outdoor rink in the city was well received, and the city has pledged $50,000 to the project. “There’s a lot of support,” said Mayor Steve Geiger. The rink will be located at the city’s Field of Dreams, with construction to begin in spring. (Learn more at www.niicearena.com.)

Pierce, for one, couldn’t be happier. “We’re all pulling on the same rope,” he said. “This goes to show, we really want an ice rink in this area.”