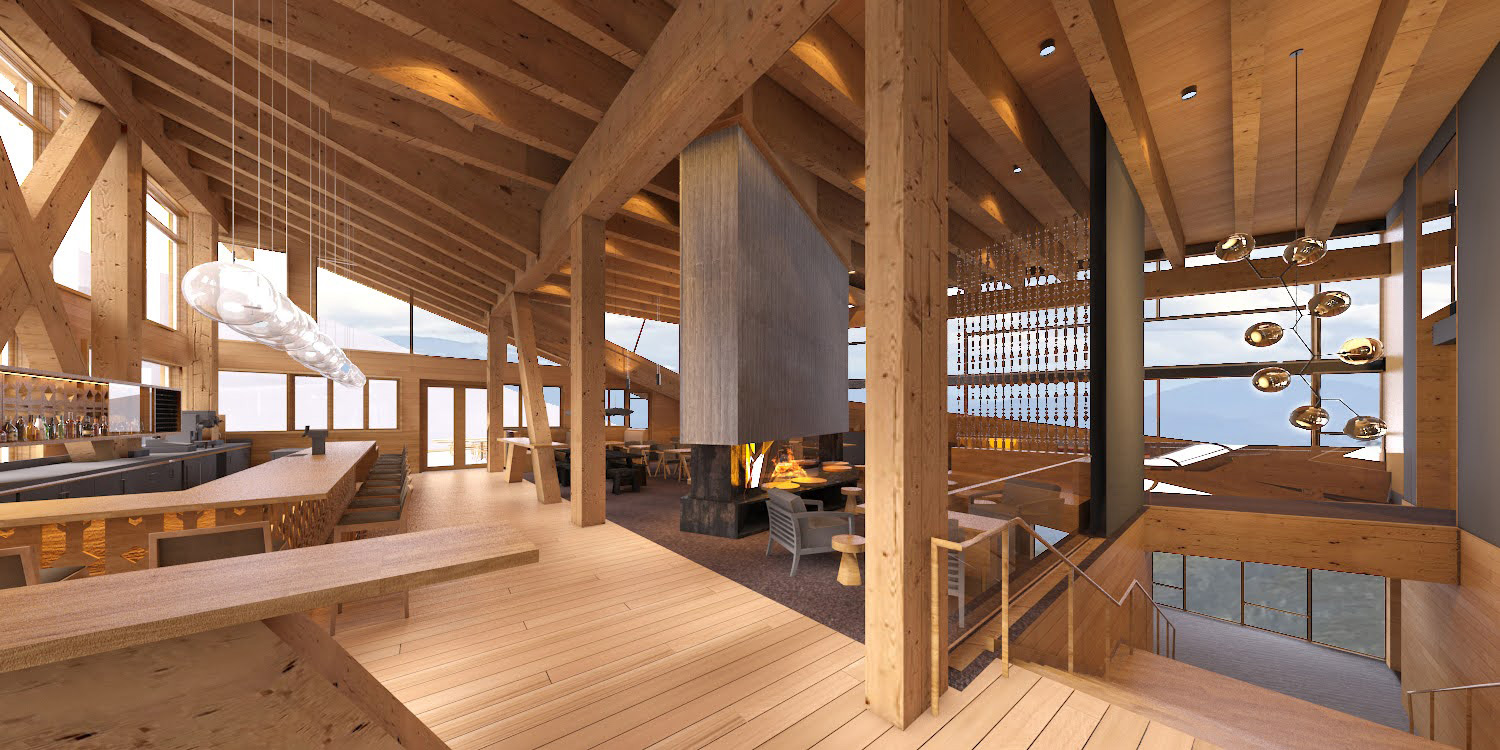 ARTIST RENDERINGS OF THE CROW’S BENCH, WITH ITS MAGNIFICENT FIREPLACE.

“Pretty cool” might be the best way to describe the new Humbird Hotel being put together at Schweitzer. It has many pretty cool features, and some really cool views. Some of those features spill over into the village plaza, where landscape architecture ﬁrm Dunn + Kiley is making big changes. Just one: Kids arriving for night skiing will have a wider heated walkway on which to run to the ticket booth, and tired, happy skiers won’t have to dodge as they make their way to buses, the bars, and the new hotel.

As winter of 2022 approached, construction folks rustled and hustled around under huge laminated beams holding up the roof of the new hotel. The exposed wood and steel skeleton reveals many secrets guests will never see but will benefit by and enjoy with the hotel open. Communication wire, tubing to feed hydronic floor heat to the hotel and surrounding plaza, electrical conduit, plumbing; a huge hodgepodge of sinewy details being routed, connected, tested, and signed off on.

In the midst of what might appear to be complete chaos, Jon Pritchard kept watch. He was the conduit between lead contractor, Jackson Construction of Missoula, and the management of Schweitzer. Pritchard works for the company formerly known as Olympic Associates Company, now known simply as OAC.

“We’re the consultants,” he said, “and it’s our job to keep both sides well informed.” The plumbers might not quite know what the electricians are doing, and the sheet rock crew just wants to cover all that stuff up, but Pritchard seems to know all, including how to keep out of the way of all the work going on.

They gave the parking lot back

Jackson, fresh from the Yellowstone Club, came on the job early in 2021. As soon as the ski season was over, they appropriated the upper parking lot for material storage and employee and equipment parking, but gave it back as soon as possible. The parking lot—of concern to all Schweitzer skiers—will not shrink much by the presence of the new building. Guest parking for the Humbird, as it is at the Selkirk Lodge, is underground.

The Humbird is not huge; 30 “standard” rooms and one large top-floor suite, with some … uh … pretty cool public space. The restaurant, dubbed the Crow’s Bench, seats 50, with a bar that accommodates another 16 folks. The walls are, quite literally, glass. Even the space at the top of the wall between the humon-gous beams is window.

Each guest room has a big share of glass, as well, offering an overview of the village plaza and, beyond that, Lake Pend Oreille. Between the room windows and glass walls on the uphill side of the room access hallways, it will be easy to make a morning determination of how many layers are needed, which goggles to wear, and what equipment to choose. There will also be no need to worry about gouging the new paint or worse yet, cracking a window, making your way to the slopes. Part of the new construction is the Ski Hut, just outside the Crow’s Bench, with lockers for guest snow toys shared by the Humbird and Selkirk Lodge.

By now, you may be wondering what Crow’s Bench and Humbird have to do with anything. The names are part of the history of Sandpoint and Bonner County. Like many 68-year-olds, Schweitzer is, through its staff and management, doing some looking back at its history and that of the place that welcomed it in 1963.

“We want to keep deepening our connection with the com-munity,” said Schweitzer Marketing Manager Dig Chismer. “One of the ways we have done that in the past is using local names for our facilities and features.” 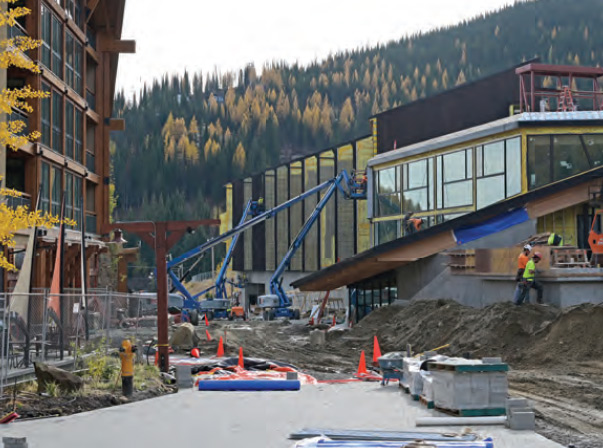 CONSTRUCTION WORK IS CLOSING IN ON THE FINISH LINE AT PRESSTIME, WITH AN OPENING DATE (WEATHER PERMITTING) BEFORE THE NEW YEAR. PHOTO COURTESY SCHWEITZER.

Names with a history

Schweitzer itself is a name with some interesting history.

The creek that drains the Schweitzer bowl, giving its name to the resort, is named for a befuddled Swiss hermit who was enamored of Mrs. Ella Farmin, one of Sandpoint’s founding mothers. The names of Colburn Basin, the Idyl-Hour T-Bar, and Colburn School, and all the other school-related runs honor the town below that housed the big Pack River Lumber mill in the timber years of the ’50s and ’60s.

The name “Humbird” is garnered from an earlier timber boom, when Humbird Lumber ruled Sandpoint’s economy and the local forests. Humbird, whose mill and yards dominated the lakefront from what is now the Seasons to the Elks golf course, called Sandpoint to “grow up,” you might say. The civilizing effect of steady employment offered by Humbird for nearly three decades at the beginning of the 20th century “settled” the rough and tumble village that the Farmins and other pioneers moved to in the 1890s, as well as the country around.

The Crow’s Bench was a place in Hope (Hope can be seen from the Humbird rooms) where working men gathered and told each other stories. It was so named by someone—we don’t know who—for its resemblance to a bunch of crows sitting in a group and squawking at each other. That may seem a bit odd, but think about that end-of-the-day beer with friends, discuss-ing that perfect line—or the most awesome faceplant ever—and you can see it. Pretty cool.

Pritchard’s tour of the hotel led through the lobby, where incoming guests get a preview of the restaurant right next door, and can cast an eye out the north end at a 3,000-square-foot heated patio set in the space where the Humbird and Selkirk meet corner to corner. He noted that Skylab Architects of Se-attle was tasked with sourcing as many materials as possible to reflect the spirit of local history; thus the massive roof trusses that recall the timber days and also let in as much of the view as possible. The rooms and public spaces feature fine wood details provided by Candela Construction of Sandpoint. 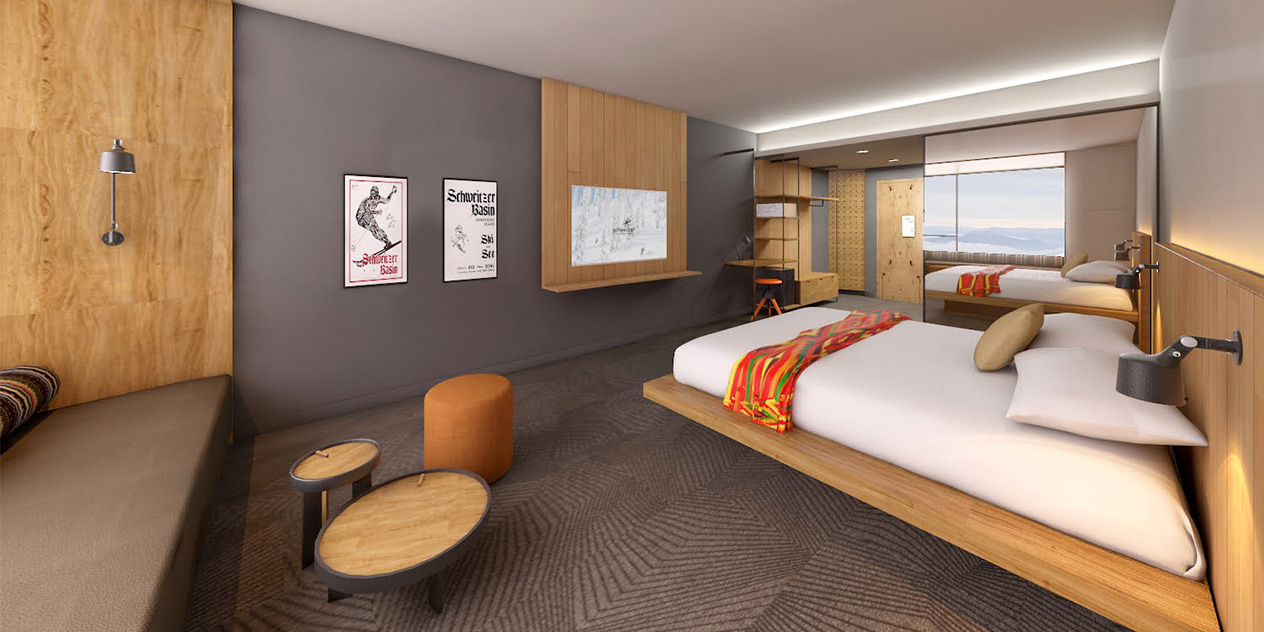 ARTIST RENDERINGS OF A SAMPLE ROOM AT SCHWEITZER’S HUMBIRD HOTEL

The guest rooms are “smart” enough to know if you are there or not. Leave the lights on, or walk out with the heat set on “bake,” and sensors in the room figure out pretty quickly that energy-inefficient you have left the premises and make necessary adjustments. When you come “home,” all is forgiven and your settings are restored. The rooms are kind of like Santa Claus. They know when you are sleeping, they know when you’re awake. Not so much on the bad or good thing.

In addition to the guest rooms and the Crow’s Bench, the new building includes a fitness center and a small workspace (dubbed “coworking space”) just above the front desk. The fitness room fea-tures state-of-the-art Precor equipment and a shower room. The workspace has a conference table that seats eight, Internet access, charging ports, an HD television, and a conference call phone—just in case you “want” to work while you’re on the mountain.

The Glass Room, at the south end of the hotel, has, as the name implies, three big glass walls—BIG! Within them, a gas fireplace is surrounded by a thermal array of cushy couches, a foosball table, and a large-screen HD television. Its “great-room” feel offers, as well, a great view, and is available for small conferences.

Atop the Glass Room is an open deck with a large hot tub in which hotel guests can soak up stars on certain nights, and watch snowflakes go “phhht” when they hit the water surface on others.

“The Humbird will help ease the weekend and holiday rooming crunch on the mountain,” Schweitzer CEO Tom Chasse said. And add to the variety of food and drink venues.

Part of Pritchard’s tour of the Humbird included a stroll through the Crow’s Bench kitchen. He pointed out this, that, and the other thing, but what catches the eye is that the east wall of the kitchen is floor-to-ceiling glass. Pretty cool.