Entertainment is back… with a vengeance

Sandpoint has been an entertainment town since forever. The bandstand at the original Farmin School on Second Avenue provided music for generations. The Panida Theater has invited folks in since 1927 (only five years until the centennial celebration!). It has also presented big-name artists as diverse as Ian Tyson, Emmylou Harris, and Leo Kotke. Sandpoint Community Hall has hosted countless dances: 1940s soirees for Farragut sailors, 1960s rock and roll parties, contra dances, square dances, and clogging. Since 1982, the Festival at Sandpoint has presented acts worthy of much larger venues. The list of smaller stages around the city is long and many bands and single acts that play them are as good as they get. And, some, not. But still.

THE SWEET LILLIES WERE A HIT AT THE HEARTWOOD CENTER. PHOTO BY JAMES DEWALT PHOTOGRAPHY.

In 2019, entertainment in Sandpoint seemed to be in ascendancy, but then COVID came. That slowed things down significantly. Now, like Arnold, music and other performance art is back. With a vengeance.

The Panida Theater is once again open for business as (sort of) usual—staff and volunteers are masked for performances and COVID precautions are strongly advised, though not required. The Panida’s winter 2023 lineup includes the Global Cinema Café series of films. Beginning in November, Pend Oreille Arts Council has five live shows scheduled, including a Missoula Children’s Theatre production of “Red Riding Hood” on March 25. Locally-sourced drama is also back on stage. Cade Prophet Memorial Productions is presenting live theater and playwright Teresa Pesce is working on a production of one-acts about relationships called “It’s Complicated.”

Pesce is realistically optimistic about the theater scene. “With Lake Pend Oreille Repertory bringing great new talent on stage and behind the scenes, and Dorothy Prophet becoming theatrically active again, I think Sandpoint is building toward accommodating the entertainment appetite of a growing community that may have performance expectations based on larger cities from which they fled.”

LPOR is a new—and lively—kid on the block in live performance. Conceived by Director Keely Gray, LPOR incorporated in December of 2019, which was not great timing. “COVID definitely put a damper on things,” Gray said. “As soon as we started we were stopped.”

But not forever. Gray and company—which includes a number of both familiar and new Sandpoint dramatists—put on their first play in February 2021, an ambitious and successful Panida production of “Young Frankenstein.” Their second show was “The Importance of Being Earnest” in the fall of 2022. THE CAST TAKES A BOW AT THE PRODUCTION OF “THE IMPORTANCE OF BEING EARNEST” AT THE PANIDA.

Gray, who grew up in Sandpoint, has a degree in theater arts from the University of Idaho. She is enthusiastic about the near future. “We have lots in the works. We launched our education program last summer with 20 local kids performing in “Peter Pan” at the Panida. Our education director, Courtney Roberts, is teaching a teen studio class as well as a class called Showstoppers—graciously sponsored by POAC. We have another musical planned for spring and a well-known play coming in the fall. Once we purchase rights we can announce titles.”

Music and places to enjoy it are simply exploding. Jared Johnson, front man for recently re-named Headwaters, noted that the growth trend probably started before COVID. “I think it was partially interrupted by COVID, but I see more music at more places than I remember pre-COVID—which, to me, is a good thing.”

Including the Panida, the Little Panida, and the Festival, Sandpoint and environs has at least 20 places that present music and/or stage performances. On every summer weekend and most in the other seasons, one can find a place to tap a toe or get up and boogie, depending. Beginning at the south end of town, The Blue Room, the Bank, the 219 and I Saw Something Shiny are on First Avenue. Turn left on Cedar and pass by (or duck into) The Back Door, Idaho Pour Authority, Di Luna’s, Eichardt’s (where Jeff Nizzoli has a magic formula for timing live music), MickDuff’s Beer Hall, Pend Oreille Winery, and Connie’s Café. Add the Sand Bar on Pine, Farmin Park (home of Mattox Farm’s Summer Music Series), Trinity at City Beach and Matchwood Brewery. Top off the list with Laughing Dog Brewery in Ponderay and Taps and the Saint Bernard at Schweitzer.

One inactive spot that deserves mention is The Hive on First, which was a hoppin’ dance venue before it became a COVID victim. Rumor has it that the facility will open again, but rumors are rumors until proven true.

Ben Olson, publisher at Sandpoint Reader and headman of Harold’s IGA, said, “I’ve heard those rumors, too. It’s a fantastic venue with excellent sound and atmosphere.  … I wish whoever takes it over luck. It’s a shame to see that beautiful venue silent.”

While no bell peals out (yet) from atop the Music Conservatory of Sandpoint (though plans are underway to reinstall the building’s original bell), they do ring within since the addition of a bell choir in 2021.

An accredited school of performing arts founded in 2009, just ten years later it purchased Sandpoint’s old city hall/fire department at 110 Main Street; a continued remodeling project has turned the building into an acoustic dream. “We reached a very significant milestone with our Little Carnegie Concert Hall,” said Karin Wedemeyer, the school’s founder and executive director, “which significantly increased our ability to have concerts.”

Devoted to providing quality music, primarily on the classical end of the scale, the school boasts a Bosendorfer grand piano, “maybe the only one in the Pacific Northwest,” which was loaned to the Festival in the summer of 2022 for the Pink Martini concert, and they recently received an “outrageous donation,” of a Steinway. “Now we have two grands on a very beautiful stage,” said Wedemeyer. “We’re offering something here that is first class.”

It’s a treat for downtown when they open the old fire truck access doors, and beautiful music fills the streets. 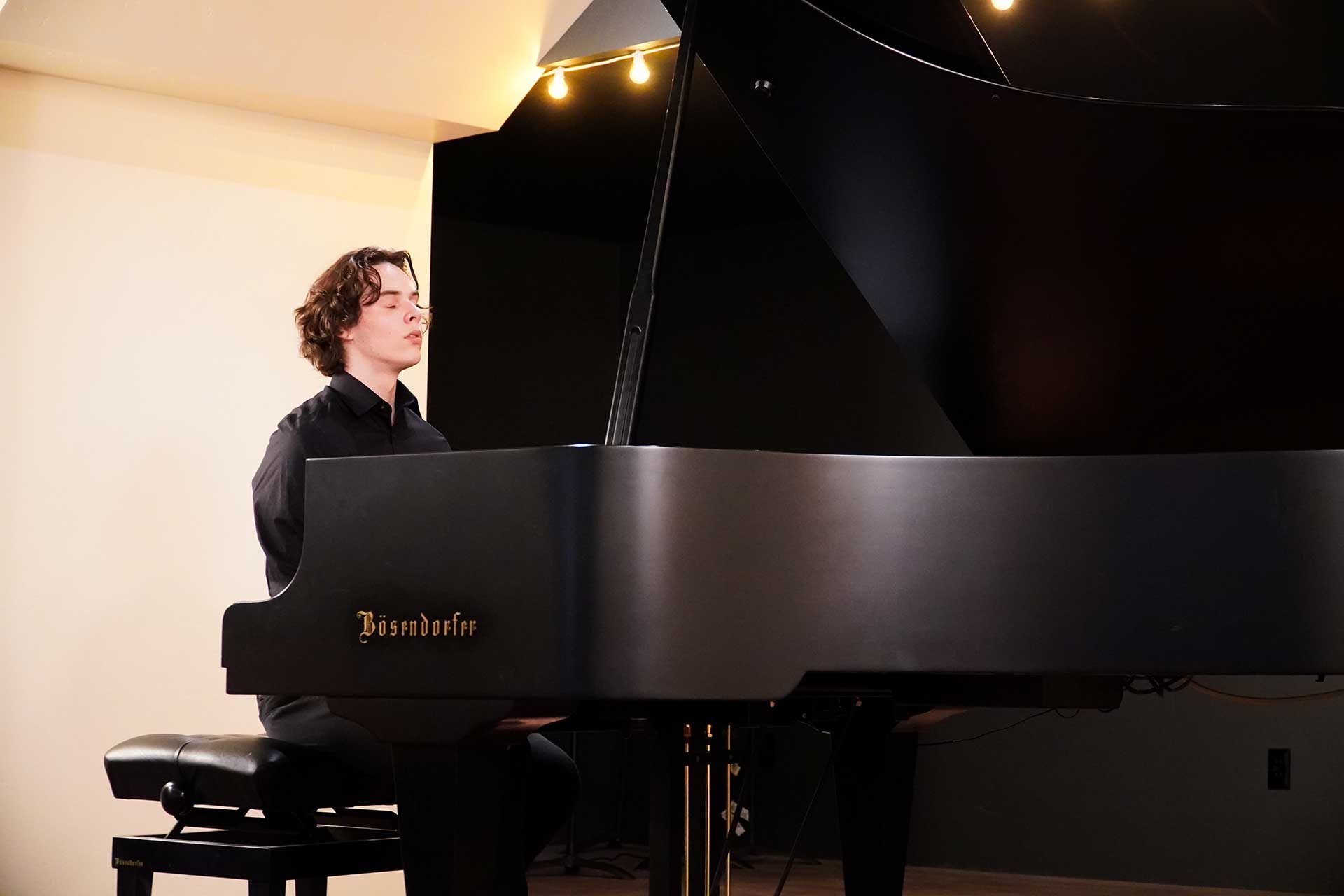 LEVI HILL PLAYS THE BOSENDORFER AT THE LITTLE CARNEGIE HALL AT THE MUSIC CONSERVATORY, WHERE HE IS AN HONORS STUDENT STUDYING PIANO. PHOTO BY OLIVIA FEE.

Meanwhile, at the corner of Sixth and Oak, is the Heartwood Center, one of the most lovely small performance venues in Idaho. Formerly St. Joseph’s Catholic Church, the brick building was built in 1908 and, after the church moved to Ontario Street, restoration began in 2012. Robb and Tasha Talbott’s Mattox Farms Productions recently began managing Heartwood, a huge stride in a great direction for them. Besides the Sandpoint Summer Music Series, Mattox Farms produces shows in venues as varied as the Panida, Eichardt’s, the Eureka Center, Pine Street Woods, and the Granary District.

Mattox Farms’ goal is to bring quality Americana music to North Idaho in a family-friendly environment; accomplished recently at the Heartwood with a Sweet Lillies concert that opened with Sandpoint singer/songwriter Brendan Kelty and friends. “This was a perfect evening,” Robb said. “Families and little kids dancing through the first set, and then total dance party for the closer. It can’t get much better than that.”

The Talbotts have been bringing up-and-coming regional—and not-so-regional—acts to town for five years, such as Slocan Ramblers, Runaway Symphony, Timber Rattlers, Hill Stomp, and the Li’l Smokies; as well as supporting local musicians like Harold’s IGA, Kelty’s shape-shifting band, Josh Hedlund and more.

Mattox Farms is also branching out into performance art—and Bonners Ferry. Last fall, they brought comedian Alex Falcone to the Pearl Theater in Bonners and then to the Heartwood.

Olson, who began Harold’s IGA with partner Cadie Archer in 2011, said, “I think Mattox Farm is a huge asset for this town and for the Heartwood Center. Robb is tireless in his mission to bring music to the people.”

Olson, Archer, and their drummer Josh Vitalie, form one of a phalanx of groups and solo acts—some famous, some not—who keep the many venues fed: Miah Kohal Band, Headwaters (nee Baregrass), Truck Mills, Bob Missed the Bus, Peter Lucht, Marty Peron, Samantha Carstens, Justin Landis, Holly McGarry, John Firshi, the Shook Twins, Doug Bond, Michael Thompson, Ian Newbill, and a big bunch of others—many more than there are venues. Firshi, who also plays with Headwaters, recently took over hosting Monday Night Blues Jam at Eichardt’s from Mills, who had been host since before Eichardt’s was.

“I’m grateful for the number of venues that support live music,” Olson said, “as well as the people who continue to turn up for shows around town, whether they’re at a bar, a pop-up venue, or on stage at the Panida. Musicians have a great support net in Sandpoint.”

Sandpoint is still an entertainment town, it seems, and becomes more so all the time.