You can’t miss it. On a clear day, Scotchman Peak stands out tall and proud across Lake Pend Oreille, 30 miles east of Sandpoint. As the highest point in Idaho’s side of the Cabinet Mountains, Scotchman’s summit is a rite-of-passage for local hikers. On a winter day, the winds can be ferocious along the final half mile ridge to the summit. In the summer, the top is renowned for the mountain goats who choose to reside on its airy heights. 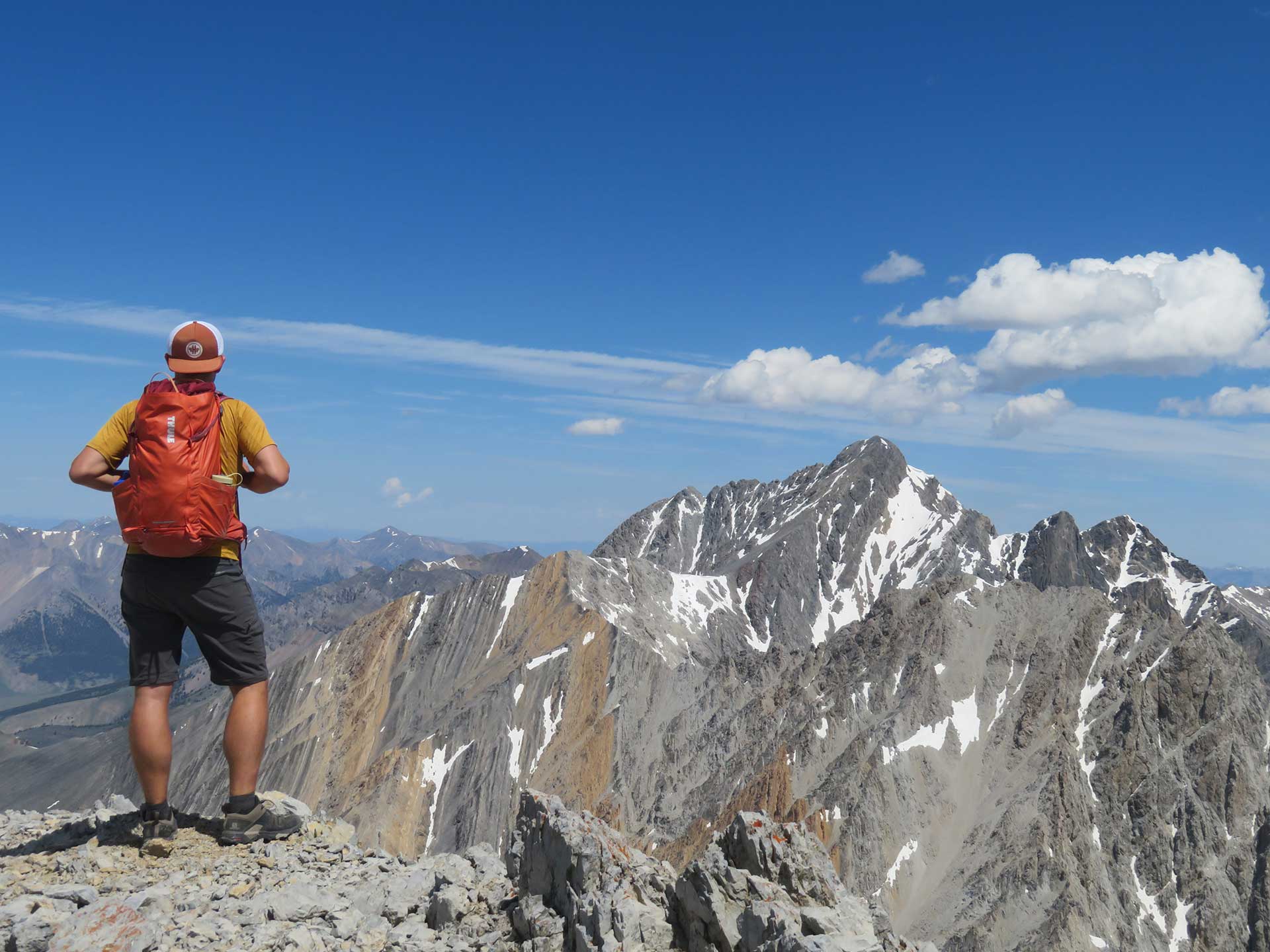 The state of Idaho boasts 123 peaks above 11,000 feet. Scotchman doesn’t even come close at 7,009 feet. Although puny by state standards, in “Idaho: A Climbing Guide,” Tom Lopez says, “The summit is probably the hardest class 1 [walk up] in the state.”  After reaching the craggy summit more than 50 times in the last decade, I can attest the four-mile trail to the top doesn’t get easier, but the views rarely disappoint.

We live in a state with the fourth highest average elevation at 5,000 feet (only Colorado, Utah, and Wyoming are higher). Though smaller in stature, our local Cabinet and Selkirk mountains are a largely unspoiled playground filled with huckleberries, wildflowers, lakes, streams, and fauna of various shapes and sizes. What the peaks in North Idaho lack in size, the trails make up for in beauty and solitude. Yet, for those of us living in the northern end of the state who want to conquer higher terrain, the challenge and commitment is considerable. The highest peaks in our state are 435 miles away. Some of the trailheads are treacherous or remote, and the closest towns many miles distant. 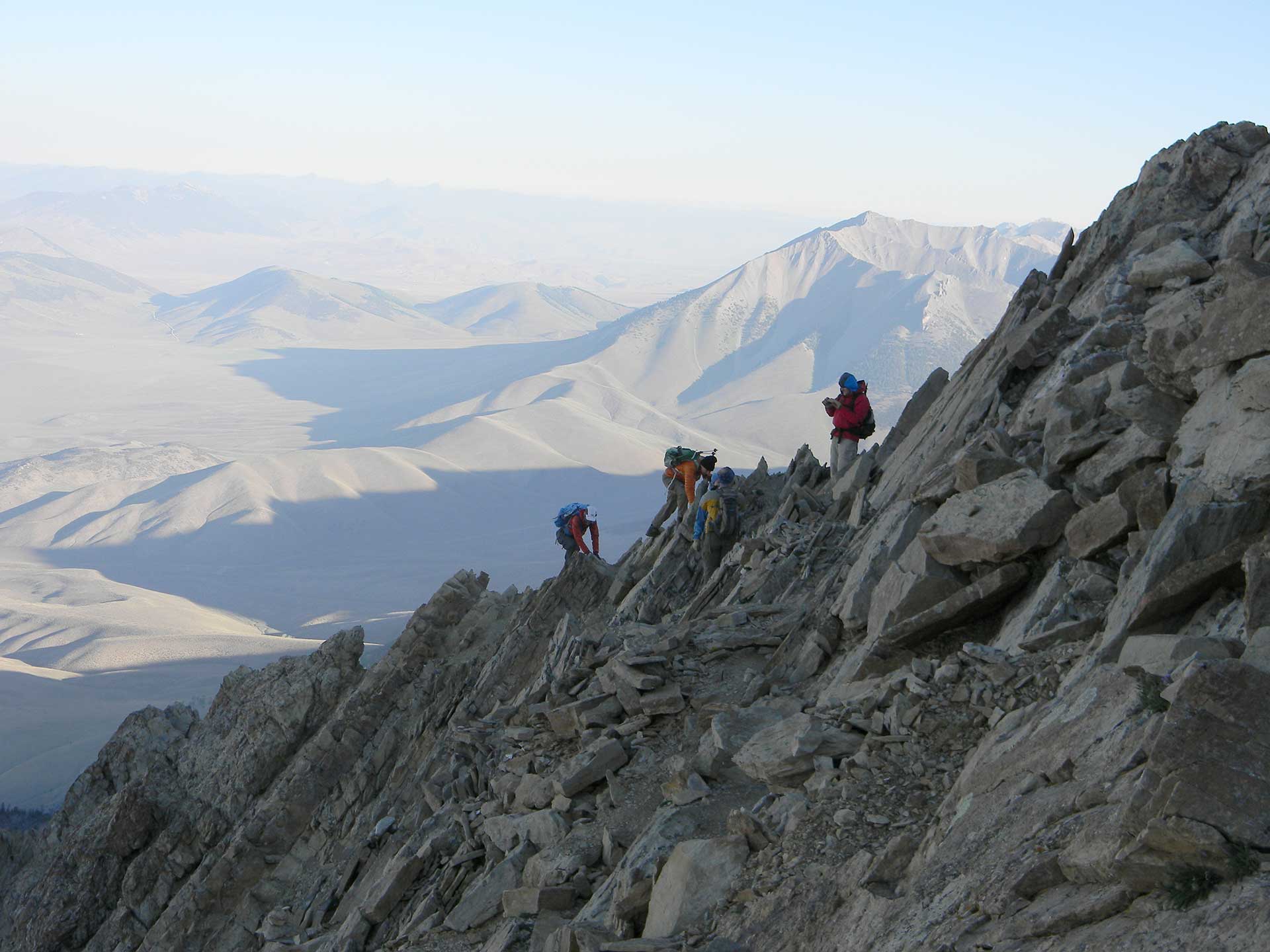 CLIMBERS MAKING THEIR WAY UP CHICKEN OUT RIDGE ON BORAH PEAK. PHOTO BY DON OTIS.

While Scotchman is a must-hike for anyone in North Idaho, 12,662-foot Borah Peak beckons adventurous hikers who want to stand on Idaho’s high point. On a summer weekend, pilgrims from all over Idaho gather at the tiny Birch Springs Campground 37 miles south of Challis. The standard route follows the steep Southwest Ridge four miles gaining nearly 1,300 feet per mile. It wasn’t until after we reached the summit of Borah that three of us decided to attempt the state’s other eight peaks in the state over 12,000 feet. “How hard can it be?” I asked, words that would come back to haunt me in the next few years.

Jeff Beeman, Landon Otis, and I committed to the challenge. Little did we know that all but two of the peaks have no trails, poor route descriptions, remote trailheads, and exposed ridges and scrambles. Even reaching Borah’s summit means navigating the infamous “chicken out ridge” (not as bad as it sounds) where on a busy summer day you can see those struggling with acrophobia consider whether to proceed up the ridge or retreat. For those who navigate the ridge, the tallest summit in the Lost River Range offers distant views of the Sawtooths to the west and the Little Lost River Valley to the east. 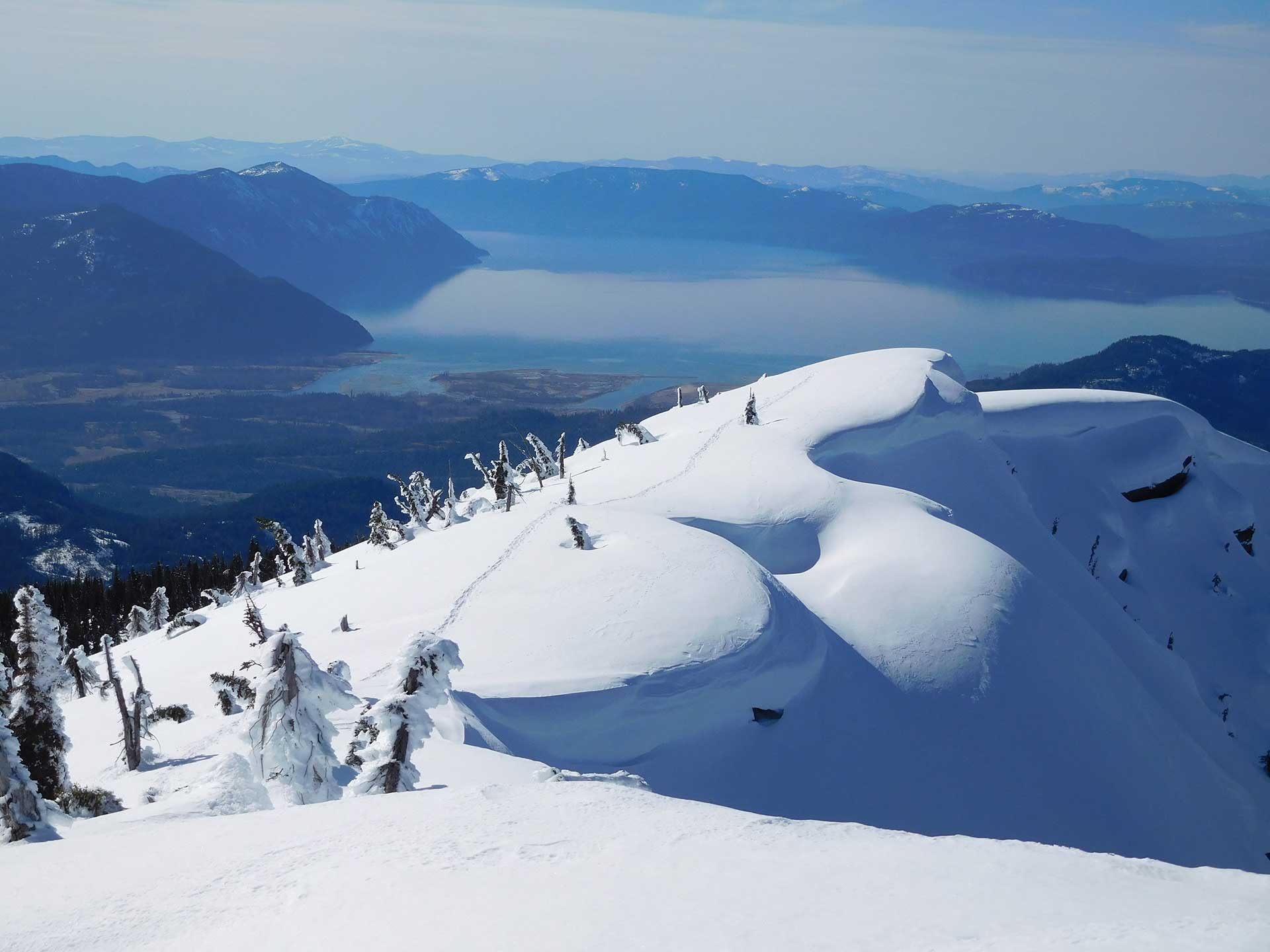 THOUGH NOT ONE OF IDAHO’S HIGHEST PEAKS, THE TOP OF SCOTCHMAN IN BONNER COUNTY OFFERS NOT-TO-MISS VIEWS. PHOTO BY DON OTIS. 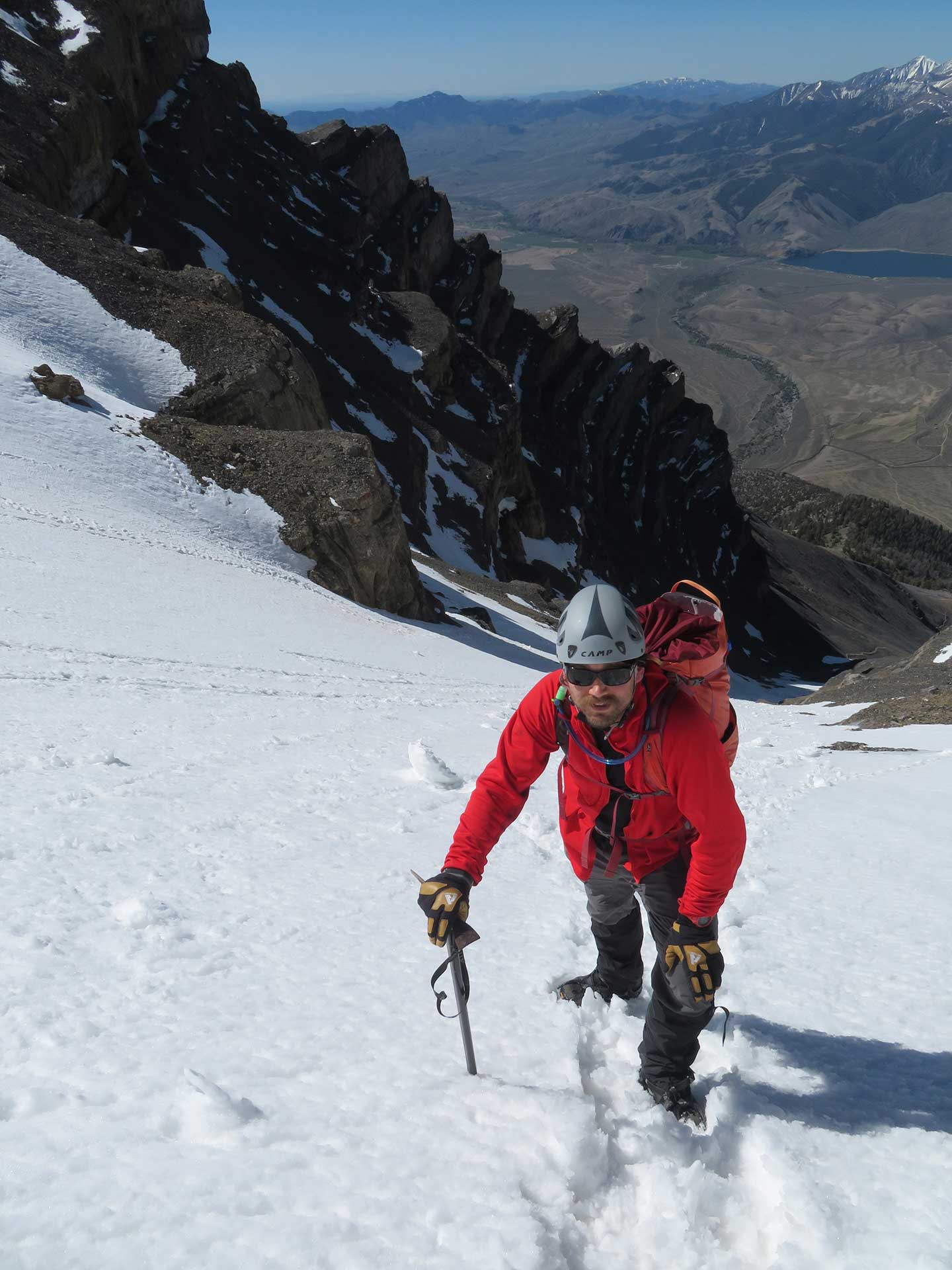 LANDON OTIS NEAR THE TOP OF THE SUPER GULLY ON LOST RIVER PEAK. PHOTO BY DON OTIS.

Idaho’s high peaks are found in three ranges: The Lost River Range (near Mackay), the Pioneer Range (near Sun Valley), and the Lemhi Range (about 75 miles from Rexburg). The Lost River Range contains seven of the high peaks and more than enough broken rock, difficult trails, and steep inclines (think Scotchman on steroids) to challenge any climber. It is not surprising that fewer than 300 people have climbed all these peaks. Only one other person from Sandpoint, Michael Boge, had done them all when we started our quest. This is quickly changing as locals Mary Fiedler and Jill Edmundson finished this summer and entered an elite group of fewer than 50 women who have done them all.  Nancy Dooley and Carl Diedrich (on the cover of Keokee Book’s “Climbers Guide to North Idaho”) are about to add to the numbers.

We encountered plenty of setbacks along the way. Broken tie rods in the remote Pahsimeroi east of Mt. Leatherman, icy conditions on Mt. Church’s exposed ridge, dangerous snow on Diamond Peak, inclement weather, and route-finding challenges. We learned the importance of turning around on two occasions, knowing the icy ridges are best left for the dry summer months. “It’s not like you’re following the yellow brick road,” said Mary Fiedler. “Just finding the trailheads and then the route-finding are major challenges.” 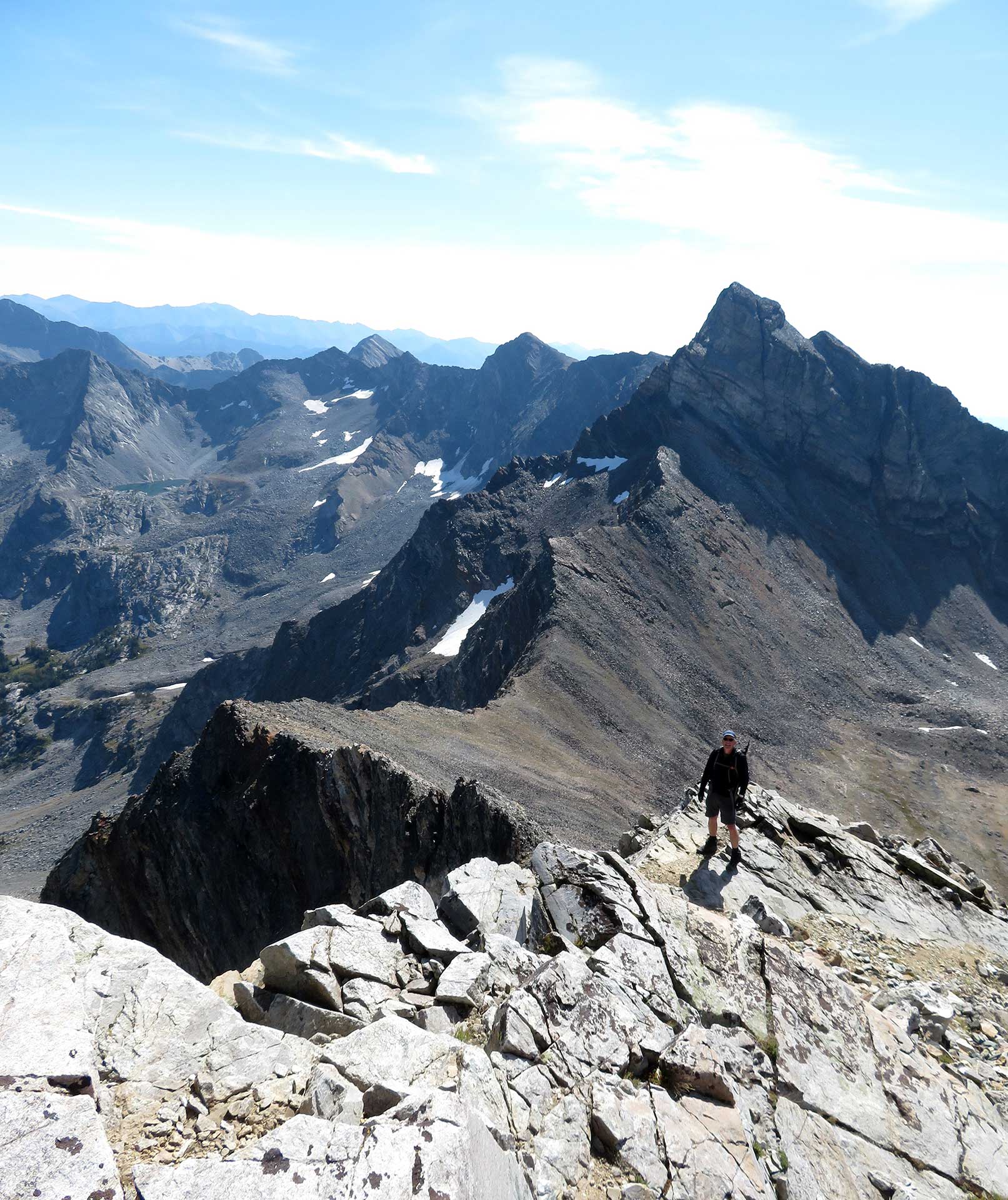 Our trio faced other hazards too, like the basketball-sized rocks that tumbled down the “Super Gully” route on Lost River Peak. The dreaded shout from a climber high above, “Rock!” meant tucking in as rocks whizzed by our heads. These peaks go up, and fast. Scree-filled gullies give way to exposed ridges and gendarmes that guard even the easiest routes. Handholds break loose far too often in the crumbling rock while marble-sized rocks are an ever-present hazard.

The topography in most of southeast Idaho is more moon-like than the lush green of our Selkirk or Cabinet mountains. Fellow climber Jeff Beeman said, “At first glance the area is desolate. Most of the trails are up stream drainages that are littered with gnarled pines, colorful wildflowers, and patina encrusted rock.”  If you are looking for a remote adventure, these ranges offer more than enough seclusion, challenge, and off-trail thrill.

The peak that dominates the Lemhi Range is 12,197-foot Diamond Peak, aptly named for its pyramid-like summit which is hard to miss from Highway 28 (Sacajawea Historic Byway). The East Ridge is a half mile of steep scrambling that can easily become technical if you veer off either side of the ridge. From the summit, the Teton Range is clearly visible to the east while the high peaks of the Lost River are across the valley to the west.

We saved Mt. Idaho for our final summit. It is a complex mountain with four big faces and multiple steep ridges.  From the time we stepped out of our vehicle, the Elkhorn Creek drainage took the typical Lost River trajectory straight up. Once out of the canyon, we had 1,800 feet of boulders, talus, and scree—always looking for the most stable ground as we ascended to meet the high saddle that connects to the West Ridge at 11,000 feet. The summit was another thousand feet above us. The route looked like an obstacle course meandering its way around towers, up broken rock, around corners, and out onto the Southwest Face.

Finally, there were no more steps to take. We were there. We found ourselves at the end of a four-year adventure. Mt. Idaho had stubbornly allowed us access to its summit, ending our journey on the other end of Idaho. “I had many doubts along the way,” said Landon Otis. “I was relieved to be done, not because I didn’t love the journey but because all those doubts along the way were finally put to rest.”