At the statehouse in Boise, Representative Heather Scott has served District 1A since 2015, representing the northernmost district in Idaho. She is known for what she calls a “common-sense conservative approach to politics with a primary focus is helping people to find solutions to problems with government.”

Serving her district has proven to be challenging and rewarding and at first required some work style changes. After working in remote areas doing field work around the country for 20 years, she said it was difficult to get used to the business suits and high heels she is required to wear every day during the legislative session. “I don’t think I owned many dresses before I went to Boise,” she said.

In person, at A.J.’s restaurant in Priest River, people come by and nod and smile at her. She has lively dark eyes and appears much younger than her 50 years.

At home in Blanchard, she and husband Andrew enjoy a rural lifestyle on their 17 acres. She likes to hunt, fish, garden, and travel. Before politics, her gardening skills developed into a small business where for several years she sold starter plants and produce at a self-serve roadside stand on Highway 41.

While growing up in rural Ohio, Scott’s mother taught her and her two sisters the value of hard work and making it on a limited budget while her father, a Vietnam veteran, was a steelworker. Never spending time in the West as a child, a college course on the geology of national parks would determine her future: “We visited 12 national parks in the West in 14 days. I knew the second I graduated I wanted to live in the West.”  After earning a B.S. in biology from the University of Akron, Scott moved to Utah, where she met her husband of 21 years on a blind date.

Now in her third term as a House Representative, Scott was not interested in politics until a few years before she ran in 2014.  She worked as an aquatic biologist with her husband for two decades on natural resource efforts related to hydroelectric projects around the country.

The couple attend the Cocolalla Cowboy Church because they appreciate the simple messages of faith and the bluegrass music played there. Before running for office, Heather said, “I prayed for a new direction, for God to use me. I felt led to run for office,” adding that initially she had no idea how to go about it, so, she did a Google search (‘how to run for office’). Her husband was shocked by her decision to run; both have realized it’s a team effort to be successful.

It hasn’t been all roses for Scott, who has been a controversial figure, sometimes even in her own party; she has seen the ugly side of politics more often than she would like. “People say nasty things. Politics can bring out the worst in people. There are people who have attempted to impugn my character, but I’ve remained true to who I am and what I believe from day one.”

Scott states she will continue to be uncompromising on issues she sees as relating to the defense of liberty and freedom. “If you look at my voting record and talk to my constituents, you will see that I stand for American principles that apply across party lines,” she said. 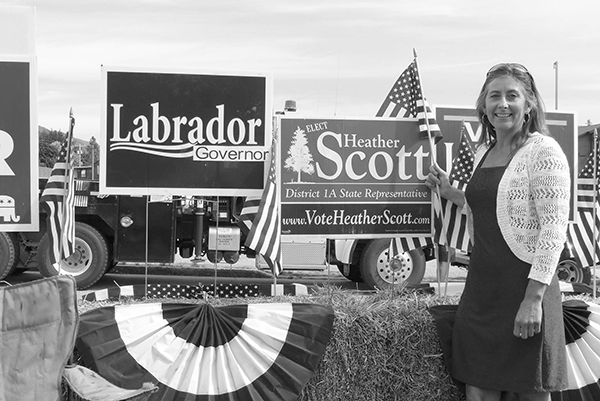